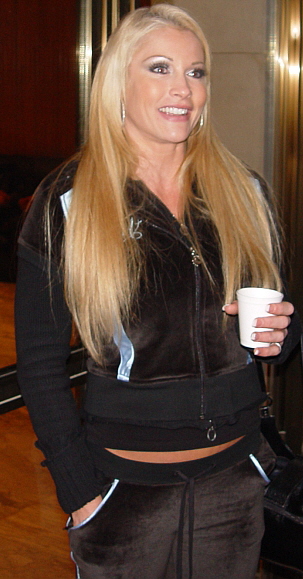 Rena Mero Lesnar (born Rena Greek August 8, 1967) is an American model, actress, and former professional wrestler. She is primarily known for her stints in as the buxom Sable character.

Before gaining popularity in the world of , Mero worked as a model for , , and Guess?. Along with her second husband , she began working for the World Wrestling Federation (WWF) in 1996. As Sable, she was one of the first s, she gained considerable popularity, surpassing that of her husband.

In 2003, she returned to the newly renamed World Wrestling Entertainment (WWE) where she was put into a storyline feud with , and another storyline as 's mistress. In 2004, she left the company to spend more time with her family.

Outside of wrestling, Mero has been featured on the cover of "" three times.

Rena Greek was born in .

Greek married Wayne Richardson in 1986. The couple had a daughter named Mariah in 1988.

Rena Mero made her World Wrestling Federation debut as Sable at in March 1996, escorting Hunter Hearst Helmsley to the ring as he took on the returning The Ultimate Warrior.

After Marc's interference at Unforgiven, Sable came to the ring and challenged Marc to a match. Sable then kicked him in the groin and delivered a "Sable Bomb" to get revenge.

Sable and Jacqueline faced off for the newly reinstated WWF Women's Title on the September 21, 1998 edition of "RAW". Jacqueline claimed the title after Marc Mero interfered.

In 1999, as part of a new storyline, Sable was attacked by a masked woman named Spider Lady, who turned out to be Luna. Sable defeated Luna in a Strap match at the Royal Rumble after an assist from a planted female Sable fan, WWF newcomer Tori. Tori's debut signified a change in Sable's persona. After the Rumble, Rena (under her Sable ring name) was featured as the cover girl for the April 1999 issue of "Playboy".

Sable went on with Nicole Bass making Bass do all of her dirty work. Sable continued to hold the championship for almost 6 months, but on May 10, 1999, Debra "won" the Women's Championship from Sable in an Evening Gown match. Normally in an Evening Gown match, the winner is the woman who forcibly removes her opponent's dress, which Sable did. As part of the storyline, WWF Commissioner , however, ruled that the woman who had lost her dress was the winner, making Debra the new Women's Champion. Off-screen, Sable was in a dispute with the WWF, which is why she was stripped of the title on-screen.

In June 1999, Rena Mero quit the WWF and filed a $110 million lawsuit against the company, citing allegations of and unsafe working conditions.

Rena returned to the World Wrestling Federation (now known as ) on the April 3, 2003 episode of "SmackDown!", reprising her role as Sable. Sable continued as a heel and spent several months in a storyline with new "Playboy" covergirl . Sable followed Torrie down to her matches, talked with her backstage, and on one occasion, she left Torrie in a tag match alone to fend for herself. Sable eventually challenged Wilson to a showdown bikini contest at Judgment Day. After Sable got the bigger applause, Torrie removed another layer of clothing, and Special Guest Referee declared Torrie the winner. After the match, Torrie went up to Sable and kissed her before exiting the ring. Sable then had an altercation with the guest judge Tazz, dumping water on him on the following edition of "SmackDown!", as a means of gaining revenge for declaring Wilson the winner. [cite web|url=http://www.onlineworldofwrestling.com/results/smackdown/030522.html|title=SmackDown! Results: May 22, 2003|publisher=Online World of Wrestling|accessdate=2008-01-21]

Sable then feuded with in a storyline where she was 's mistress. Vince appointed Sable as Stephanie McMahon's personal assistant against Stephanie's will, sparking the feud between the duo. During the feud, they competed in several catfights, a food fight, a parking lot brawl, and a match where Sable bashed a clipboard over Stephanie's head. At Vengeance, Sable defeated Stephanie after interference by her new ally, A-Train. At SummerSlam, Sable accompanied A-Train in his match against , which he lost. After the match, The Undertaker held Sable so that Stephanie could use a Spear attack on her. After SummerSlam, Mr. McMahon and Sable focused on getting rid of Stephanie for good, so Vince made an at No Mercy. In the match, Sable slapped Stephanie and was attacked by . She also handed Vince the lead pipe that he used to choke Stephanie out for the win.

Sable briefly became a face again when she appeared on the cover of "Playboy" magazine for the third time in her career. On the cover, she appeared with fellow diva Torrie Wilson, making them the first WWE Divas to pose in "Playboy" together. Surrounding the release of the cover, the duo feuded with "RAW" divas and Miss Jackie, even though all four women were faces at the time. The two teams squared off at in an Interpromotional Tag Team Evening Gown match, but the divas started the match in their underwear, making it more of a match. Sable and Wilson were victorious.

Following WrestleMania XX, Sable quickly turned heel again and engaged in another short feud with Torrie Wilson. The feud culminated in a match at The Great American Bash, which Sable won. Sable's final appearance in WWE was on "SmackDown!" when she, Dawn Marie, and Torrie Wilson accompanied to the ring in his lowrider. On August 10, 2004, WWE's official website announced that Rena Mero and WWE had parted ways. Mero claimed that she left the company to spend more time with her family.

Mero, along with , appeared at several shows after her WWE release. After Rena and Marc Mero became officially divorced in 2004, she began dating Lesnar, whom she became engaged to later that year. The engagement was called off in early 2005, but they were engaged again in January 2006. They eventually married.

*Entrance theme
**Mero used various versions of the theme "Wildcat" throughout her entire WWF career. The theme, known for the growling and roar of a "wildcat" and the sound of a whip cracking, is available on several WWF/WWE theme music albums: "", ', and '.