Senaat (help·info), French: le Sénat, German: der Senat) is one of the two chambers of the bicameral Federal Parliament of Belgium, the other being the Chamber of Representatives. It is considered to be the "upper house" of the Federal Parliament.[1]

After the Belgian Revolution, the National Congress decided about the Belgian Constitution and the state structure. A bicameral Parliament was chosen over a unicameral one, due to fears of more democratic and progressive decisions in the Chamber of Representatives, as was seen in France. Thus the Senate served as a more conservative and elite body. To be eligible, one had to pay 1000 florins, which meant that at that time, only about 4000 persons could be elected.

In the past, French was the sole language of government in Belgium. In 1913, the liberal Emmanuel De Cloedt spoke for the first time in history Dutch in the Senate, which the French-speaking pro-catholic newspaper La Libre Belgique described as séparatisme parlementaire ("parliamentary separatism").[2]

The Flemish nationalist party New Flemish Alliance (N-VA) (which became the largest party in 2010), among other Flemish parties, said in 2010 that they want to abolish the Senate.[3] The French-speaking parties, however, want to keep the Senate. During the 2010–2011 Belgian government formation, it has been decided that the Senate would no longer be directly elected and instead become a meeting place for members of the various regional parliaments.

Of the total of 71 elected senators, 40 are elected directly, 21 appointed by the Community parliaments and 10 senators are co-opted. The overall distribution of seats between parties is however determined by the results of the direct election. Prior to the Belgian federal election of May 21, 1995, there were 184 elected senators.[4] The fourth State Reform, which took place in 1993, revised the Belgian Constitution and replaced the provincial senators, who were appointed by the Provincial Councils, with Community senators.[5][6] The change took effect following the May 21, 1995 federal election.

Of the total of 40 directly elected Senators, 25 are elected by the Dutch electoral college and 15 by the French electoral college. These numbers are fixed by Article 67 of the Belgian Constitution and roughly reflect the ratio of Dutch-speakers to French-speakers by population. The directly elected Senators are always elected on the same day as the members of the Chamber of Representatives, for a term of 4 years, except if the Chambers are dissolved earlier. The last federal election took place on Sunday June 13, 2010. 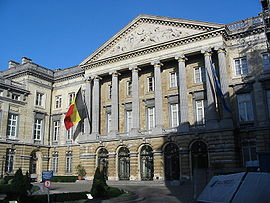 The Palace of the Nation in Brussels, home to both Chambers of the Federal Parliament of Belgium

In order to ensure that the Senate can continue to exercise its functions when the Community parliaments are dissolved, the Community Senators remain in office until the parliament of their Community either confirms their mandate or appoints new Community senators.

Ten Senators are co-opted, meaning they are elected by their peers: six by the Dutch-language group and four by the French-language group. These seats are distributed between parties using the direct election results. In 1893, the co-opted members were included in the Constitution as a new category of Senators. It was intended to allow the Senators to elect a number of experts or members of representative organisations to join them to enhance the quality of debate and legislation; however, political parties soon started using it as a means of rewarding loyal members that weren't elected.

These are the children of the King, older than 18, or if there are none, the Belgian descendants of the main branch of the Royal house, who have taken the oath of office. Having reached the age of 21, the Senators by Right are in theory entitled to vote, but in practice they do not cast their vote. They are not counted towards the required quorum, therefore, to pass a valid vote, 36 of the 71 senators have to be present.

Article 69 of the Belgian Constitution sets forth four qualifications for senators: each senator must be at least 21 years old, must possess the Belgian nationality, must have the full enjoyment of civil and political rights, and must be resident in Belgium. A senator can only enter into office after having taken the constitutional oath of office, in either of the three official languages in Belgium: Dutch, French or German. They may also choose to take the oath in more than one language. The oath of office is as follows: "I swear to observe the Constitution". (Dutch: Ik zweer de Grondwet na te leven, French: Je jure d'observer la Constitution, German: Ich schwöre, die Verfassung zu befolgen)

Another important incompatibility is based on the separation of powers. A senator who is appointed as a minister ceases to sit in the Senate and is replaced for as long as they are a minister, but if that individual resigns as a minister, they may return to the Senate, in accordance with Article 50 of the Belgian Constitution. A senator cannot also be a civil servant or a member of the judiciary at the same time, however, a civil servant who is elected to the Senate is entitled to political leave and doesn't have to resign as a civil servant. It is also not possible to be a member of the Federal Parliament and a Member of the European Parliament at the same time.

The Senate does not systematically check whether any of these (or other) incompatibilities apply to its members, however, newly elected senators are informed of the most important incompatibilities at the start of their mandate and it is up to them to verify whether they are in compliance with the regulations regarding incompatibilities and, if not, to determine which office they will abandon.[7]

The current President of the Belgian Senate is Sabine de Bethune of the Christian Democratic and Flemish party (CD&V).

The President of the Senate presides over the plenary assembly of the Senate, guides and controls debates in the assembly, and is responsible for ensuring the democratic functioning of the Senate, for the maintenance of order and security in the assembly and for enforcing the Rules of the Senate. To this end, they have extensive powers. They also represent the Senate at both the national (to the other institutions) and the international level. Additionally, they chair the Bureau, which determines the order of business, supervises the administrative services of the Senate, and leads the Senate's activities.

The Bureau of the Senate[9] is composed of the President, the three Vice-Presidents, the floor leaders of the fractions that are represented in the standing committees and the Quaestors. Currently, the only fraction whose floor leader is not a member of the Bureau is the Ecolo Fraction, which has only two members. The Bureau leads the day-to-day activities of the Senate and convenes at least once a week in order to manage the work of the Senate. The Bureau determines the legislative agenda and the order of business in the plenary assembly and the committees, decides upon the lists of speakers, and manages the internal affairs of the Senate. A member of the Federal Government is usually invited to attend the discussions about the legislative agenda. The Bureau also assists the President in the conduct of parliamentary business. In addition, the Bureau also appoints and dismisses the staff of the Senate on the advice of the College of Quaestors.

The Senate has a College of Quaestors,[10] which consists of three Senators who are in charge of Senate housekeeping. These Senators, who are known as Quaestors, are responsible for the financial management of the Senate, they have to make sure that the necessary equipment and facilities are available and they advise the Bureau on matters relating to the administration of the services of the Senate, such as human resources and logistics. The Quaestors are also members of the Bureau. The Colleges of Quaestors of the Senate and the Chamber of Representatives meet regularly to settle common problems concerning the library, buildings, security, catering, etc.

In certain matters both the Chamber and the Senate still have equal power, which means that both Chambers must pass exactly the same version of the bill. These include constitutional revisions, laws requiring a qualified majority (the so-called "community laws"), laws on the basic structure of the Belgian State, laws approving agreements of cooperation between the Federal State, the Communities and the Regions, laws on the approval of international treaties, and laws on the organisation of the judiciary, the Council of State, and the Constitutional Court of Belgium. Additionally, all bills concerning international treaties are introduced in the Senate first before moving on to the Chamber.

For all other legislation, the Chamber of Representatives takes precedence over the Senate. However, the Senate may still intervene as a chamber of consideration and reflection as it has the opportunity to, within specific time limits, examine the texts adopted by the Chamber and, if there is a reason to do so, make amendments. The Chamber may subsequently adopt or reject the amendments proposed by the Senate or make new proposals. Whatever the case, the Chamber has the final word on all "ordinary legislation". The Senate may also submit a bill it has adopted to the Chamber which can approve, reject or amend it, in this case the Chamber also has the final word.

In accordance with Article 143 of the Belgian Constitution, the Federal State, the Communities and the Regions have to observe federal loyalty. However, that does not prevent conflicts of interest. By virtue of its composition, the Senate is the assembly within which the conflicts of interest between the Federal State, the Communities and the Regions may be resolved. The Senate may decide on such conflicts by giving reasoned advice, but such decisions are not binding. In addition, the Senate has also been entrusted with the responsibility for examining how the division of competences between the various components of the federal level can be made more homogeneous.

The Federal Parliament also includes joint committees, which include members of both the Senate and the Chamber of Representatives, such as the Parliamentary Consultation Committee, which is tasked with resolving certain problems relating to legislative procedures. One of the main problems in this respect concerns the determination of the legislative procedure to be followed. Other issues concern the time limits to "evoke" and review certain bills. There are others joint committees, such as the Federal Advisory Committee on European Affairs. In the latter, there are not only Senators and Representatives, but also Belgian Members of the European Parliament.

The Senate, just like the Chamber of Representatives, has the right to conduct parliamentary inquiries pursuant to article 56 of the Belgian Constitution, which provides that "Each Chamber has the right of inquiry".[15] Committees of inquiry were rarely set up until 20 years ago, and have been used increasingly in the recent past. In practice, the Senate uses the right of inquiry by creating a parliamentary committee of inquiry composed of a number of Senators. This committee can summon and hear witnesses. A parliamentary committee of inquiry can also conduct searches and seize documents. Committee meetings at which witnesses or experts are heard are public unless the committee decides otherwise. Normally, the committee is obliged to report in a given time to the plenary assembly. It can for instance suggest amending existing legislation. The plenary assembly votes on motions submitted in the committee's report.