He was the son of Khedive Ismail, and was born on November 15, 1852. His mother was the Princess Shafiq-Nur. Although he was the eldest son, he was not sent to Europe to be educated like his younger brothers, but was left to grow up in Egypt.

In 1866, Ismail succeeded in his endeavor to alter the order of succession to the Khedivate of Egypt. The title, instead of passing to the eldest living male descendant of Muhammad Ali, was now to descend from father to son. Ismail sought this alteration mainly because he disliked his uncle, Halim Pasha, who was his heir-presumptive, and he had imagined that he would be able to select whichever of his sons he pleased for his successor.

But he found, after the change had been made, that the powers interpreted the new arrangement as applying strictly to the eldest son. Tewfik therefore became heir-apparent.

He was given a palace near Cairo to live in, and for twelve years he passed an uneventful life, farming, and establishing a reputation for good sense and fair dealing with his fellow tenants.

In 1878 he was appointed president of the council after the dismissal of Nubar Pasha. He held this office only for a few months; but this was long enough to show that, if he was unambitious and not particularly intelligent or energetic, he had the wisdom to refrain from taking a part in the intrigues which then formed the chief part of political life in Egypt and Sudan.

He went back to his estate, and settled down once more to a quiet country life. He was not left undisturbed for long. On 26 June 1879, Ismail, at the instance of Britain and France, was deposed by the sultan, who sent orders at the same time that Tewfik should be proclaimed Khedive.

The new khedive was so displeased by the news of his accession that he soundly boxed the ears of the servant who first brought the tidings to him. Egypt and Sudan at that time was involved in financial and political troubles brought about by the policy of Ismail, and the situation was made worse by the inaction of Britain and France for some months following Tewfik's accession.

Tewfik's people were dissatisfied, his army disaffected; his advisers were nearly all of the adventurer class, with their own ends to gain; and he himself had neither the character of a strong ruler nor the experience that would have enabled him to secure an orderly administration of affairs. 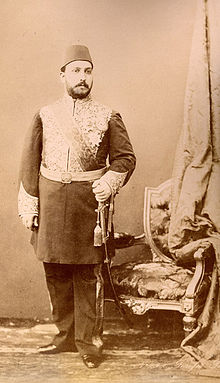 Disorder prevailed until November 1879, when the dual control was reestablished by the governments of Britain and France. For over two years Major Evelyn Baring (afterwards Lord Cromer), Mr. (afterwards Sir) Auckland Colvin, and Monsieur de Blignieres practically governed the country, endeavouring to institute reforms while possessing no means of coercion.

During all this time the disaffection in the Egyptian army was increasing. Tewfik had been blamed for his failure to take a firm line with the rebels, but his attitude was governed by his relations with Britain and France, and he was unable to control events.

The dissatisfaction culminated in the anti-foreign movement headed by Urabi Pasha, who had gained complete command of the army. In July 1882 the attitude of Urabi, who was carrying out defensive works on a large scale, made the British admiral (Sir Beauchamp Seymour, afterwards Lord Alcester) to declare that he would bombard the forts of Alexandria unless they were handed over to him.

Before the bombardment began it was suggested to Tewfik that he should leave the city and embark either upon a man-of-war belonging to one of the neutral powers, or in his own yacht, or in a mail steamer which was then in the port. His answer was, "I am still Khedive, and I remain with my people in the hour of their danger." At his palace of Qasr el-Raml, three miles (five kilometers) from the town, he was beyond reach of the shells, but his life was nevertheless imperiled.

When the rebel soldiers attacked the palace he managed to make his escape and to reach another palace after passing through the burning streets of Alexandria. Here he was obliged to agree that a guard of British bluejackets should protect him from further risk. He showed his courage equally during the cholera epidemic at Alexandria in 1883.

He had gone back to Cairo after the Battle of Tel al-Kebir, had consented to the reforms insisted upon by Britain, and had assumed the position of a constitutional ruler under the guidance of Lord Dufferin, the British special commissioner.

When cholera broke out, he insisted upon going to Alexandria. His wife accompanied him, and he went round the hospitals, setting an excellent example to the authorities of the city, and encouraging the patients by kind and hopeful words.

In 1884, Sir Evelyn Baring (Lord Cromer) went back to Egypt as diplomatic agent and Consul-General of Britain. His first task was to demand that Tewfik should abandon the Sudan. Tewfik gave his consent with natural reluctance, but, having consented, he did everything he could to ensure the success of the policy which Baring had been sent to carry out.

He behaved with equal propriety during the negotiations between Sir H. Drummond Wolff and the Turkish envoy, Mukhtar Pasha, in 1886. His position was not a dignified one but that of a titular ruler compelled to stand by while others discussed and managed the affairs of his country.

The Sultan was his suzerain; in Britain he recognized his protector: to the representative of each he endeavoured to show friendliness and esteem. As time went on his confidence in Baring increased, until at last he deferred to the British agent in almost everything.

On occasion, however, he acted on his own initiative, as when in June 1888 he dismissed Nubar Pasha and summoned Riaz Pasha to form a ministry, an action influenced, nevertheless, by Tewfiks knowledge of the divergence of views between Nubar and the British agent.

Baring encouraged Tewfik to show his activity in matters of administration, and he took a great interest in all matters connected with irrigation, education and justice. He was not an imposing man, but he showed a genuine desire to govern his country for its own benefit. He understood the importance to Egypt of British assistance and support; his natural shrewdness made him accept the British conditions; his natural good feeling kept him from any inclination to intrigue.

In private life he was courteous and amiable. He had no desire to keep up the unapproachable state of an oriental ruler. Indeed, in many ways his manners and habits were less oriental than European. He married in 1873 his kinswoman, Amina Hanem, with whom he lived very happily. She was his only wife and Tewfik was a strong advocate of monogamy.

He died on 7 January 1892, at the Helwan Palace near Cairo, and was succeeded by his eldest son, Abbas II.

By his wife he had the following children: