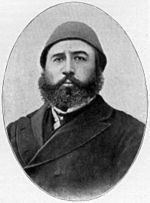 Prince Mustafa was born at Cairo the son of Ibrahim Pasha of Egypt. He was educated at the Egyptian Mission School in Paris. On January 18, 1863 Prince Mustafa became the heir apparent to his brother Isma'il Pasha but on May 28, 1866 the succession law was changed meaning that in was now inherited by the direct male line of the reigning Khedive instead of from brother to brother.

After losing his place as first in the line of succession Prince Mustafa was appointed minister for education in 1862, minister for finance in 1864 and 1869, and for minister for justice from 1871 until 1872.

Prince Mustafa had a number of wives and died at Kandilli, Bosphorus having fathered ten sons and six daughters, the eldest of whom, Princess Nazli Fazl, was a prominent member of Cairo society and hostess to the first literary salon in the Arab world.