Davidka
Not to be confused with Little David, an American large caliber mortar.

The Davidka (Hebrew: דוידקה‎, "Little David") was a homemade Israeli mortar used in Safed and Jerusalem during the early stages of the 1948 Israeli War of Independence. Its bombs were reported to be extremely loud, but very inaccurate and otherwise of little value beyond terrifying opponents; they proved particularly useful in scaring away Arab forces. It is nominally classified as a 3 inch (76.2 mm) mortar, although the bomb was considerably larger.[1][2]

The Davidka ("Little David") was named for its inventor, David Leibowitch, although the name also metaphorically evoked the biblical battle of King David and Goliath (I Samuel chap. 17): In 1948, the tiny state of Israel was forced to defend itself against the "giant" British-trained and British-led professional Arab Legion.

The mortar was designed at the Mikveh Israel agricultural school in Holon in the winter of 1947–1948. It was first used in combat on March 13, 1948, in the attack on the Abu Kabir neighborhood of Jaffa. The greatest victory attributed to the Davidka was the liberation of the Citadel, a strongpoint in the center of Safed, on the night of May 9–10 1948.[3][4][5]

Six Davidkas were manufactured in all, and two were given to each of the Palmach's three brigades (Harel, Yiftach, and HaNegev). One was used by the Yiftach Brigade in the battle for Safed, and now stands in a square in Safed. Another stands in Jerusalem's Davidka Square, memorializing the Harel Brigade's participation in the battle for Jerusalem.[6] The Hebrew inscription on the monument ("וגנותי על-העיר הזאת, להושיעה") is from 2 Kings 29:34, meaning "For I will defend this city, to save it." 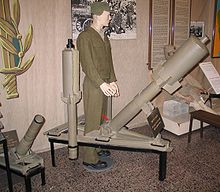 The secret of the Davidka was its 40 kg (88 lb) bomb, which was much larger than the mortar from which it was fired.

In conventional mortars, the bomb is inserted into the tube and the entire projectile travels through the tube to gain initial guidance at launch time. The Davidka's tail tube is the only part of the shell which fit inside the launch tube. This contributed to the weapon's notorious inaccuracy, as the shell lacked adequate guidance during the launch phase to acquire aerodynamic stability in the intended direction.[7] It is not a spigot mortar, either; in a spigot mortar the "barrel" is a guiding rod inserted inside the shell's propellant chamber. The Davidka's propellant chamber fires inside the mortar tube (barrel) as does a conventional mortar, but the 3 inch (76.2 mm) caliber of the barrel is much smaller than the caliber of the warhead of the bomb. It is therefore an oversized conventional mortar, where most of the bomb, and especially its center of gravity, remain outside the barrel—an aerodynamically unstable design, which only worked at all because the center of pressure was still within the barrel. The head of the bomb was essentially a large can filled with nails, rocks, or any other material which could be used for shrapnel. This meant that the blast effects of the weapon were completely random and of dubious efficacy as an anti-personnel weapon. It was of no practical value for siege combat or other light artillery purposes, but it made a loud bang. 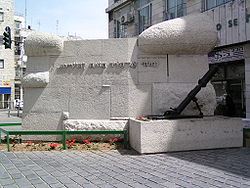 Small pieces of metal and tubes were welded onto the outside of the casing, reducing the weapon's accuracy even further than its already non-aerodynamic design, but contributing greatly to the whistles and shrieks which it made when in flight. The noise was its most important effect, so that anyone attacked by a Davidka mortar would hear the shell seeming to fall very near to them before bursting very loudly, increasing the fear factor.

It is said that the Arabs, having been told that many of the designers of America's atomic bomb were Jewish (e.g., Einstein and Oppenheimer), thought that they were being attacked with atomic weapons.[8] [9]

The Davidka was used in the battles for Haifa, Ein Zeitun, Safed and Biddu. According to Palestinian historian Walid Khalidi, the Davidka carried a bomb that weighed 60 lb. and caused fear and panic when used in built-up areas.[10]