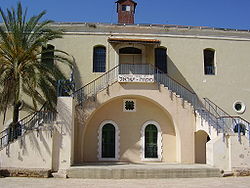 Rear front of the Synagogue in Mikve Israel 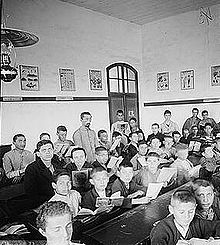 A class at Mivkeh Israel in its early years 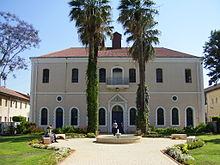 Charles Netter established the school in 1870 on a tract of land southeast of Tel Aviv leased from the Turkish Sultan, who allocated 750 acres (3.0 km2) to his project.[2] Netter, the first headmaster, introduced new methods of agricultural training. Baron Edmond James de Rothschild contributed to the upkeep of the school.

The name is taken from two passages in the Book of Jeremiah - Jeremiah 14:8 and 17:13. It was proposed by Wolf Grinstein, one of the school's first students, who later taught there.

Today, entrance to the school grounds is via the city of Holon.[4]