Zheng Zhenduo
This is a Chinese name; the family name is Zheng. 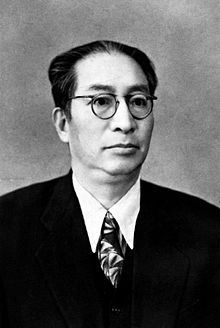 He made a significant contribution towards the establishment of the Chinese literature and the editing of a variety of literary magazines. In 1921, he, Shen Yanbing (沈雁冰) and other classmates organized Wenxue Yanjiu Hui (Literary Study Society 文學研究會). In 1923, he became the chief editor of Xiaoshuo Yuebao (小說月報). In addition, he in succession participated in editing Min Chao (閩潮), Xin Shehui (新社會), Wenxue xunkan (文學旬刊). In late 1931, he was appointed to be the university professor of Yenching University (燕京大學) and Fudan University (復旦大學), the president of Faculty of Arts and the director of Chinese department of Jinan University (暨南大學). He was also the chief editor of Shijie wenku (The World's Library 世界文庫) at the same time. During the (China's) War of Resistance against Japan (1937-1945), he retained in Shanghai to continue upholding the progress of cultural work. After the establishment of New China, he was assigned to be the chief of Historical Relic Organization (文物局), the head of the archaeology research institute of the Chinese Academy of Science and literary research institute, the assistant minister of cultural department, committee member of State Council scientific program committee and Chinese Academy of Science philosophical social sciences, the vice-chairman of Chinese folk literature and art research council and etc. He died in a plane crash in the Soviet Union during his journey in 1958.

Zheng Zhenduo experienced much in his life, including working hard in his teenage years, experiencing success and satisfaction in his career, facing difficulties and recovering from them.

Zheng Zhenduo was born on 19 December 1898 in Yongjia, Zhejiang. His ancestral home was in Changle of the Fujian province. He was born in a poor family. Together with two younger sisters, he was raised by his mother because his father and grandfather died when he was still a teenager.

He was named "Zhenduo" (振鐸) by his grandfather. "Zhen" (振) denotes arousing an action and "Duo" (鐸) is a kind of big bell. His grandfather wanted him to ring like a great bell to summon and to arouse people. Besides, his grandfather gave him the childhood name "Mu Guan" (Wooden official 木官).

In 1917, Zheng began studying at the Beijing Railway Management School (北京铁路管理传习所)and graduated in March 1921. Beyond classroom, he read a lot of books and developed an enormous interest in social sciences, Chinese literature and Western literature and thus developed a critical mind. During the May Fourth Movement, he was a student representative, spreading the news of student movements in Beijing. In 1919, he helped publish two magazines called Xin Shehui (新社會 "New Society") and Jiuguo jiangyan zhoukan (救國講演周報 "National Salvation Speeches Weekly").

Careers throughout his life

Zheng had been a journalist, a modern writer, archeology and a literature scholar throughout his life.

In May 1921, Zheng helped set up a drama society called Minzhong Xiju She (Demotic opera troupe 民眾戲劇社) with Mao Dun, Ye Shengtao, Chen Dabei, Ouyang Yuqian, Xiong Foxi and other writers. They published a monthly magazine named Xiju (Drama 戲劇) on 31 May in the same year.

In 1922, Zheng established the first magazine for children, Children's World (兒童世界) In January 1923, he became the chief editor of a monthly magazine of novel, Xiaoshuo Yuebao (小說月報). After the "May-30 Incident" in 1925, he helped founding a newspaper called Gongli Ribao (公理日報). From then on, he wrote many books including Zhongguo Wenxue Shi (History of Chinese literature 中國文學史, 1938) and 1943 Diary (1943年日記).

Zheng had been a scholar giving lectures in universities, a researcher of the academy and a journalist since 1931. He taught in the Department of Chinese in Yenching University (燕京大學), in Jinan University (暨南大學) from 1935 to 1941 as the Dean of faculty of Arts and in Peking Univsity since 1953. After 1949, he became the Secretary for the Culture Department and Cultural Heritage Department in China.

In April 1927, Chiang Kai-shek (蔣介石) began a swift and tyrannical attack on thousands of suspected Communists in the area he controlled. Many innocent students and movement activists were killed. Writers, including Zheng, were under political pressure. Therefore, he left his family for France in May 1927. During the years living in Paris, he kept mailing his diary to his wife, which was published as a book named Ouxing Riji (Diary of travels in Europe 歐行日記).

He continued his journalistic career after coming back to China in 1929 and founded Jiuwang Ribao (救亡日報). In October 1945, he founded a weekly magazine called Democracy (民主) to oppose Chiang Kai-shek's pro-US policy and urge people to stop civil wars.

Due to the invasion of Japanese troops, Shanghai was besieged starting from 1937 and many significant cultural assets were lost. In the light of this, Zheng devoted himself to the rescue and protection of aged Chinese documents and antiques. Disguising himself as a staff member in a stationery store, named Chan Sixun (陳思訓), he managed to save many aged books from damage or loss to the outside world.

On 18 October 1958, Zheng led national cultural delegates to visit Arabia and Afghanistan. Unfortunately, he died in a plane crash in the Chuvashia,Soviet Union during the journey.

A Journey Towards Journalism

Zheng started his journalistic career in 1920s during the May Fourth Movement. Together with some classmates including Zhong Tao (仲陶), he got a first taste of editing in starting a publication named Jiuguo Jiangyan Zhoukan (救國講演周刊). The magazine - being published in Wenzhou (溫州) for only 6 to 7 times - was strangled by Authority since it enraged a government official.

As one of the founders of a youth magazine, Xin Shehui (新社會), Zheng aimed at criticizing the Beijing government. It began its publication on 1 November 1919, which consisted of four pages. The aims of the magazine was to:

Zheng gave many speeches about the student movement in Beijing. On top of criticizing, he wanted to make good use of the New Culture Movement (新文化運動) to publicize and promote new social ideals for the Chinese future development. Chen Duxiu (陳獨秀) suggested that Xin Shehui could be edited with a more approachable style accepted by the general public. The magazine was finally published on 1 November 1919 throughout China, arousing tides of attention from the public, especially amongst the young readers. However, as Zheng and his co-editors were still inexperienced in editing by that time, the magazine was thought to be immature in editing and too sloganeered. On the hand, the content of the magazine upset the military side of the government. Thus, in one month's time, the government called the publication to a halt.

In addition, he established Wenxue Yanjiu Hui (Literary Study Society 文學研究會) with Mao Dun and Ye Shengtao in November 1920. In January 1923, he took over the position of chief editor of Novel Monthly (小說月報) from Mao Dun. He was the chief editor on and off for nearly 9 years. He advocated a literary advocacy of "Blood and Tears" and he supported to write with the style of realism.

Besides, in the early June 1925, he foundeded a newspaper called Kongli Ribao (公理日報) with Wu Yuzhi and Ye Shengtao in Shanghai. This newspaper was aimed at criticizing the "May Thirtieth Incident" (五卅慘案) and the rising foreign imperialism in China.

Also, he contributed in various newspapers like Jiuguo Jiangyan Zhoubao (救國講演周報) and Xinxue Bao (新學報) to awaken Chinese people from old traditions. These articles were mainly about social issues and the evil deeds of the old traditional practices. Zheng wrote articles from different aspects like the liberation of women, morality, social psychology and the liberation of political power. They all advocated more people to rethink the old values position.

Zheng could be regarded as an expert of editing as he edited more than 53 types of newspapers, books and magazines. Being inspired by the May Fourth Movement, he became an editor based on the influence of the New Culture Movement.

With his abundant experiences, he established his own editing theory. He criticised the contemporary editors of his time of using naive editorial methods regardless of their responsibility and power as an editor.

In 1931, he wrote an article entitled Bianji Fangzhen Yu Bianji Jihua (The edit guidelines and plan; 編輯方針與編輯計劃) in which he stated his view on editing in the mass media that quality was more important than quantity.

Zheng was proficient in foreign languages including English, Russian, Indian, Greek and Latin. He did a great job in translating a lot of Russian and Indian literature.

Zheng also translated many Indian literature. He mainly translated the poems as well as the Indian ancient-times fable such as Sir Rabindranath Tagore(1861-1941). Zheng had translated a prominent number of Tagore's poems to Chinese since 1920s. In October 1922, he published his translation of StrayBird (飛鳥集). In August 1925, he published The Indian Fable (印度寓言). There were 55 translation works of his in total.

Zheng started his study in Greek and Roman literature in his early age. In 1929, he published The Story of Love (戀愛的故事). Afterwards he translated The Hero Legends of Greek and Roman Myth Legends (希臘羅馬神話傳說中的英雄傳說). Then in 1935, he published a book called The Legends of Greece (希臘神話), which was three to four times thicker than his previous one. After liberation, in the second edition of The Legends of Greece, he introduced Karl Marx's well-known discourse in The Introductory of political and economical criticism (政治經濟批判導言) which was about ancient times mythology to analyze Greek mythology.

As the previous newspapers and magazines were banned by the government, Zheng believed that a proper established literature union would make things run easier. In January 1921, he established Wenxue Yanjiu Hui (Literary Study Society 文學研究會), which literally means literature research union, with Mao Dun(茅盾), Ye Shengtao (葉紹鈞) and 12 other people in the related field.

The Union's first publication was Wenxue Xunkan (文學旬刊). It was published along with the well known newspaper called Shishi Xinbao (Current events newspaper 時事新報). He revealed the goal of the publication and the literature views of the union. He believed that literature is important and capable to influence the society. It was not merely an era, a place or one's reflection, but it acted as a frontier, which could affect the morality of human beings. Also, he strongly opposed to the old style of Chinese literature, of setting leisure and religions as main themes. He supported the writing of life – one theme in new realism literature approach.

Within the May Fourth movement, he adhered the direction of realism for New literature era. He thought literature liked 'mirror of a life'. This means his writing mostly revealed the real faces of societies. Also, he put a lot of emphasis on the importance of creative living. During his long composing and researching career, he showed a fully comprehensive realism of literature. He thought that literature must contribute to "life":

Literature should consist of the highest ideal of the author, which form the soul of the article, in order to make it meaningful to the readers and the whole of society.

Starting from the late 1920s, Zheng was teaching Chinese literature History in universities. At that time, he did much in making research in Chinese classical writing. For example, he used his pen name, Bao Fun, to write Yuenqu Xulu (元曲敍錄) in the Novel Monthly (小說月報). Also, he finished editing The History of the Chinese Literature (中國文學史) in 1930.

Zheng put heavy emphasis on emotional elements in literature, highlighting its importance in distinguishing between literature and science. He advocated that literature functions to instill a passion in the readers' heart. One example was the historical novel, Arrest of the fire stealer (取火者的逮捕).

The works of Zheng Zhenduo

He wrote more than 20 prose texts and the following are some of the examples: