Needtobreathe (stylized as NEEDTOBREATHE) is an American rock band from Seneca, South Carolina.[1] The band has charted on mainstream rock/pop charts, but have had their greatest number of singles chart on Christian music charts. The band is composed of Bear Rinehart (lead vocals, guitar, piano), Bo Rinehart (backing vocals, guitar), Seth Bolt (backing vocals, bass), and Joe Stillwell (drums, percussion). They have released four studio albums: Daylight (2006), The Heat (2007), The Outsiders (2009), and The Reckoning (2011).[2] Needtobreathe is opening for Taylor Swift on the North American leg of her Speak Now World Tour , which began May 27, 2011 in Omaha, Nebraska.

Named after the acclaimed University of Alabama football coach Bear Bryant, brothers Bear and Nathaniel Bryant "Bo" Rinehart were born and raised in rural Possum Kingdom, SC, where their pastor father ran a church camp. After moving to nearby Seneca, South Carolina, the two siblings were exposed to a variety of music and started playing instruments themselves. While enrolled at Furman University, Bear—besides being an excellent wide receiver (he won the 2002 Banks McFadden trophy for South Carolina football player of the year) -- moonlighted as a vocalist, guitarist, and pianist, even finding time to perform around campus with longtime friend and drummer Joe Stillwell. Meanwhile, Bo studied architecture at Clemson University while playing guitar in his spare time, and he and bassist Seth Bolt joined the Bear/Stillwell duo to form Needtobreathe.

Seth Bolt had received a degree in recording engineering at Full Sail University, and the band honed its sound while recording several EPs at Bolt's Plantation Studios. A strenuous tour of Southeastern and Midwestern America followed. The hard work paid off when Needtobreathe came to the attention of Atlantic Records/Lava Records, who signed the band in 2005. A debut full-length album, Daylight (the cover of which was painted by Bo), arrived one year later, having been recorded in British Heliocentric Studios with Keane producer Andy Green. Tours with Train, Collective Soul, and Will Hoge kept the guys busy throughout the year, and they returned to the studio in December to begin work on their follow-up. The Heat was released in August 2007 spawning several singles and earning two Dove Award nominations.[3]

After signing with both Atlantic Records and Sparrow Records, the band went to the UK to record their first studio album, Daylight, with producer Andy Green.[4] Its first radio single "You Are Here" was released early in 2006.[4] Just a few days before their debut release, the band was featured on the cover of CCM Magazine as one of the new artists of 2006.[4] Daylight was then released on April 4, 2006.[5] 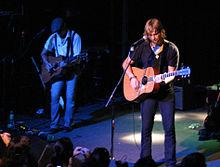 Needtobreathe started pre-production for their second studio album The Heat in late 2006 at Seth Bolt's Old Plantation studio.[6] In the beginning of 2007, the band started a six-month recording period at both Rick Beato's Black Dog Studio in their hometown Seneca and Ed Roland's Tree Sounds in Atlanta.[6][7] The Heat was then released on August 28, 2007 through Atlantic Records and Word Entertainment.[8]

In 2009, Needtobreathe's song "Washed by the Water" was nominated and won the Dove Award for "Rock/Contemporary Song of the Year" at the 40th annual GMA Dove Awards.

Needtobreathe is currently one of the opening acts for Taylor Swift's North American leg of her Speak Now Tour.

In television and film

The band's song "More Time" was featured in the soundtrack of the 2007 film P.S. I Love You and reached #8 on the Triple A radio chart. Numerous Needtobreathe songs have been used on television coverage and for movies. ESPN used the song "Streets of Gold" from The Heat during the network's coverage of the 2007 Ford 400. The show The Hills used "We Could Run Away". Fox TV promoted its Monday night lineup for the shows Prison Break and K-Ville with the song "Nothing Left to Lose". Fox Sports used "Don't Wait for Daylight" during their coverage of the 2006 World Series. The song "Shine On" has seen the most uses, having been played on the MTV show Newport Harbor; Oprah's Big Give; the movie Employee of the Month; the movie To Save a Life; and in 2008, the song featured in the WWE Tribute to the Troops special. In August 2009, the song "These Hard Times" from the band's album The Outsiders was featured in promos for a new NBC show, Mercy. Their song "Nothing Left to Lose" was featured in trailers for the movie Extraordinary Measures released January 2010. In addition, their song "Something Beautiful" is featured in the soundtrack of the film When In Rome and on the 21st episode of the first season of Cougar Town. Their song "Something Beautiful" from their album The Outsiders was featured in an overstock.com commercial. Their song "Lay 'Em Down" was used in a promotion for a new NBC show called "Outlaw". The chorus from their song "Hurricane" often plays during the transition stage following commercial breaks for The NFL on CBS.

On March 26, 2009, David Leonard (formerly of Jackson Waters) was announced as the newest (touring) member of Needtobreathe. He joined their live touring band on keyboard and backing vocals. In the summer of 2010, David left life on the road and was succeeded by Toby Friesen (also formerly of Jackson Waters).[11] In April 2011, Toby left the band and was succeeded by Josh Lovelace, a former touring member of Decemberadio.[12]