In the 1970s, Dome C was the site of ice core drilling by field teams of several nations. It was called Dome Charlie (NATO Phonetic Alphabet code for the letter C) by the U.S. Naval Support Force, Antarctica, and its Squadron VXE-6, which provided logistical support to the field teams. In January and November 1975, three LC-130 Hercules aircraft suffered severe damage during attempted takeoffs from Dome Charlie. In November 1975 and November 1976, the U.S. Navy established field camps on Dome Charlie to recover the aircraft. Following major structural repairs and replacement of engines in the field, the three LC-130's were flown to McMurdo Station on December 26, 1975, January 14, 1976, and December 25, 1976.

From November 1977 to March 1978 a French party of 13 settled down in the existing camp left by the aircraft rescuers. They brought several tons of equipment—thanks to the VXE-6 airplanes—and achieved the planned ice-coring campaign down to 980 m bringing to surface, and later on in their labs for study, ice samples 45,000 to 50,000 years old.

During the austral summer of 1979, the camp was re-occupied by Americans and French, under the auspices of the US Antarctic Research Program, sponsored by the National Science Foundation. Deep ice core drilling, meteorology and seismic studies were conducted. The camp, with a maximum summer population of 18, was operated and maintained by four employees of ITT Antarctic Services and one US Navy medical corpsman. When the camp was shut down for the season in about January, 1980, it was left mostly intact, with a radio-isotope powered remote weather station operational.[citation needed]

In 1992, France decided to build a new station on the Antarctic Plateau. The program was later joined by Italy. In 1996, a French-Italian team established a summer camp at Dome C. The two main objectives of the camp were the provision of logistical support for the European Project for Ice Coring in Antarctica (EPICA) and the construction of a permanent research station. The new all-year facility, Concordia Station, became operational in 2005.

The Advisory Committee on Antarctic Names (US-ACAN) considers "Dome Charlie" to be superior to the informal name, "Dome C," and that it has precedence over "Dome Circe", a name suggested from Greek mythology by members of the SPRI airborne radio echo sounding team in 1982. 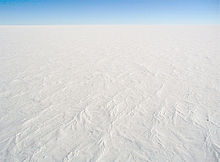 The high, flat, and cold environment of the Antarctic Plateau at Dome C

Dome C is one of the coldest places on Earth. Temperatures hardly rise above −25°C in summer and can fall below −80°C in winter. The annual average air temperature is −54.5°C. Humidity is low and it is also very dry, with very little precipitation throughout the year.

Dome C does not experience the katabatic winds typical of the coastal regions of Antarctica because of its elevated location and its relative distance from the edges of the Antarctic Plateau. Typical wind speed in winter is 2.8 m/s (6 mph).

Dome C is situated on top of the Antarctic Plateau, the world's largest desert. No animals or plants live at a distance of more than a few tenths of a kilometre from the Southern Ocean. However, skuas have been spotted overflying the station, 1,200 km away from their nearest food sources. It is believed that these birds have learned to cross the continent instead of circumnavigating it.

Dome C is notable for its potential to be an extremely good astronomical observation site; the transparency of the Antarctic atmosphere allows stars to be observed, even when the Sun is at its highest possible elevation angle of 38°. The good viewing is due to very low infrared sky emission, extremely low humidity, a high percentage of cloud-free time, low atmospheric aerosol and dust content, and an absence of light pollution other than auroras and moonlight. This location is a serious candidate for the ESO's E-ELT project (a telescope of 30–60m mirror diameter). However, sky coverage is less than at lower latitude locations as northern celestial hemisphere objects never rise or are too low above the horizon.

Writing in the Proceedings of the Astronomical Society of the Pacific in 2005, Karim Agabi et al. discuss the suitability of the site for astronomy in terms of the seeing.[1] They determined the median seeing (measured with a Differential Image Motion Monitor placed on top of an 8.5 m high tower) to be 1.3±0.8 arcseconds. This is significantly worse than most major observatory sites, but similar to other observatories in Antarctica. However, they found (using balloons) that 87% of turbulence was below 36 meters. A telescope built on a tower could rise above this "boundary layer" and achieve excellent seeing. The boundary layer is 200 meters at the South Pole and may be as low as 20 meters at Dome A.

In an earlier (2004) paper, Lawrence et al. considered the site and concluded that "Dome C is the best ground-based site to develop a new astronomical observatory".[2] This team measured superior seeing of 0.27 arcseconds, twice as small as at Mauna Kea Observatory. This figure was taken with an instrument insensitive to near-ground turbulence and so it is comparable to the 0.35 arcseconds Agabi et al. measured for "free atmospheric seeing".

The 2004 experiments to measure the astronomical conditions at the site were unattended, controlled by a computer system that had to supervise the generation of its own electricity using a jet-fuel powered stirling engine. The computer, running Linux, communicated with the outside world using an Iridium phone.