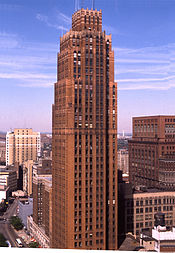 Donaldson and Meier was an architectural firm based in Detroit, Michigan. Founded in 1880 by John Donaldson (1854–1941) and Henry J. Meier (1858–1917) the firm produced a large and varied number of commissions in Detroit and southeastern Michigan. Donaldson, the principal designer of the partnership from a design point of view was born in Stirling, Scotland and immigrated to Detroit at a young age. He returned to Europe where he studied at the Art Academy in Munich, Germany, and at the École des Beaux-Arts in Paris, France.

The early designs from the firm, such as the Unitarian Church in Ann Arbor, were frequently in the Richardsonian Romanesque style but as with many other architectural companies whose longevity outlast the style of the day, their output changed with the times. Their last buildings, such as the David Stott Building, were in the art deco genre.

Like most of the prominent architects in Detroit during the 1920s and 1930s, Donaldson and Meier employed sculptor Lee Lawrie to produce a panel for Beaumont Tower and used Corrado Parducci to create sculpture for many of their other buildings.

Unless otherwise noted, buildings are in Detroit, Michigan.