Benevolent and Protective Order of Elks

Benevolent and Protective Order of Elks
For the animal, see Elk; for the Canadian counterpart see Elks of Canada; for other uses, see Elks (disambiguation)

Benevolent and Protective Order of Elks

The Benevolent and Protective Order of Elks (BPOE; also often known as the Elks Lodge or simply The Elks) is an American fraternal order and social club founded in 1868. It is one of the leading fraternal orders in the U.S., claiming nearly one million members.[1]

The Elks had modest beginnings in 1868 as a social club (then called the "Jolly Corks") established as a private club to elude New York City laws governing the opening hours of public taverns. After the death of a member left his wife and children without income, the club took up additional service roles, rituals and a new name. Desiring to adopt "a readily identifiable creature of stature, indigenous to America", fifteen members voted 8-7 to favor the elk above the buffalo.[2] Early members were mostly from theatrical performing troupes in New York City. It has since evolved into a major American fraternal, charitable, and service order with more than a million members, both men and women, throughout the United States and the former territories of the Philippines and the Panama Canal.[3]

Membership was opened to African Americans in the 1970s, although the Winter Haven, Florida Elks Club was famously segregated as late as 1985, when Boston Red Sox Coach Tommy Harper protested a Red Sox policy of permitting them into the spring training clubhouse to issue lodge clubroom invitations to white players only. Women were permitted to join in the mid-1990s, but currently atheists are excluded. The opening of membership to women was mandated by the Oregon Public Accommodations Act, which was found by an appeals court to apply to the BPOE, and it has been speculated that the religious restriction might be litigated on the same basis.[4] A year after the national organization changed its policy to allow women to join, the Vermont Supreme Court ordered punitive damages of $5,000 for each of seven women whom a local chapter had rejected citing other reasons.[5] Current members are required to be U.S. citizens over the age of 21 and believe in God. 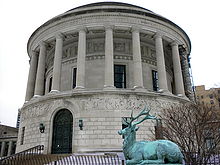 The national headquarters, known as the Grand Lodge, is located in the Lincoln Park neighborhood of Chicago at the southwest corner of Diversey Pkwy, Sheridan Rd, Lakeview Ave, and Cannon Dr. Local Elks Lodges, known as subordinate lodges, are located in about 2,100 cities and towns across the United States and its territories (as of 2006). There are several Elks lodges overseas. They must be located in a current or former US territory and only American citizens can be members.

The local Elks lodges are known by their lodge number and the name of the city in which they are located. For example, the first Lodge, located in New York City, is Lodge 1, while the Lodge in Nashville, TN is Lodge 72. When a Lodge is closed, its number is retired, but if re-instituted at a later time, the city name and lodge number can be reinstated by the Grand Lodge.

A Grand Lodge Convention is held each year in a principal city in the United States. It is at this convention that Grand Lodge Members (Current Exalted Ruler or Past Exalted Rules of subordinate lodges) vote on the next years Grand Lodge Officers including Grand Exalted Ruler (GER), BPOE 'Constitution and Statues' proposed amendments and conduct other items of business.

Elks Magazine is published 10 times a year and goes to all members.[1]

Past Exalted Rulers are not considered officers, but rather a valuable advisory resource. A Lodge's Past Exalted Ruler's Association usually meets monthly, and current officers are encouraged to seek counsel from the men and women who have led Lodges in previous years.

Established in 1928, the Elks National Foundation is the charitable arm of the BPOE. The foundation, with an endowment valued at more than $400 million, has contributed $253.5 million toward Elks' charitable projects nationwide.

Due to the willingness of most Elk Lodges to respond to community needs and events, it is common to turn the BPOE abbreviation into a backronym for "Best People on Earth."[10][11][12]

The Hour of Recollection 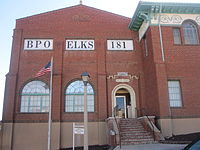 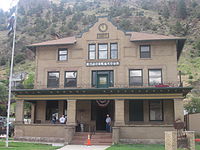 Deceased and otherwise absent lodge members are recalled each evening at 11 p.m. Chimes or sometimes a bell will be rung 11 times and the Lodge Esquire intones, "It is the Hour of Recollection." The Exalted Ruler or a member designated by him gives the 11 o'clock toast, of which this version is the most common:

You have heard the tolling of eleven strokes. This is to remind you that with Elks, the hour of eleven has a tender significance. Wherever Elks may roam, whatever their lot in life may be, when this hour falls upon the dial of night, the great heart of Elkdom swells and throbs. It is the golden hour of recollection, the homecoming of those who wander, the mystic roll call of those who will come no more. Living or dead, an Elk is never forgotten, never forsaken. Morning and noon may pass them by, the light of day sink heedlessly into the west. But ere the shadows of midnight shall fall, the chimes of memory will be pealing forth the friendly message: To our absent members.[13]

An interesting physical artifact of the order is the number of communal cemetery plots once favored by the group. Often these are marked with impressive statuary.

Presidents of the United States