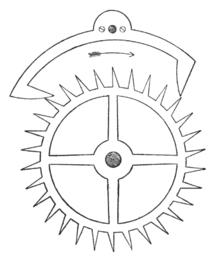 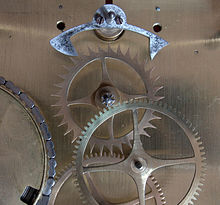 The anchor and escape wheel of a late 19th century clock. The plate that normally holds the front end of the pinions has been removed for clarity. The pendulum is behind the back plate.

In horology, the recoil or anchor escapement is a type of escapement used in pendulum clocks. An escapement is the mechanism in a mechanical clock that maintains the swing of the pendulum and allows the clock's wheels to advance a fixed amount with each swing, moving the hands forward. The anchor escapement was probably invented by British scientist Robert Hooke[1][2] around 1657,[3][4] although some references credit clockmaker William Clement[4][5][6] who popularized the anchor in his invention of the longcase or grandfather clock around 1680, and disputed credit for the escapement with Hooke.[4] Joseph Knibb probably built the first working anchor clock at Wadham College, Oxford, around 1670.[7] The anchor became the escapement used in almost all pendulum clocks. A more accurate variation called the deadbeat escapement was introduced by British clockmaker Richard Towneley around 1675. This gradually superseded the anchor and is used in virtually all modern pendulum clocks.

Each time one pallet moves away from the escape wheel, releasing a tooth, the wheel turns and a tooth on the other side catches on the other pallet, which is moving toward the wheel. The momentum of the pendulum continues to move the second pallet toward the wheel, pushing the escape wheel backwards for a distance, until the pendulum reverses direction and the pallet begins to move away from the wheel, with the tooth sliding along its surface, pushing it. Then the tooth slides off the end of the pallet, beginning the cycle again.

Neither the anchor escapement nor the deadbeat form, below, are self starting. The pendulum must be given a swing to get them going.

The backward motion of the escape wheel during part of the cycle, called recoil, is one of the disadvantages of the anchor escapement. It results in a reversal of the entire wheel train back to the driving weight with each tick of the clock, causing backlash in the wheel train, excessive wear to the gear teeth, and inaccuracy. It can also cause the points of the escape wheel teeth to dig into the pallet surface. The teeth are slanted backward, opposite the direction of rotation, and the surface of the pallets is slightly convex, to prevent this.[8]

Another reason the escape wheel teeth are slanted backward is as a safety measure. If the clock is moved without immobilising the pendulum, the uncontrolled swinging of the pendulum can cause the anchor pallets to collide violently with the escape wheel. The slanted teeth ensure that the flat faces of the anchor pallets hit the sides of the teeth first, protecting the delicate points from being broken.[8]

The anchor was the second widely used escapement in Europe, replacing the 400 year old verge escapement in pendulum clocks. The pendulums in verge escapement clocks had very wide swings of 80° to 100°. In 1673, 17 years after he invented the pendulum clock, Christiaan Huygens published his mathematical analysis of pendulums, Horologium Oscillatorium. In it he showed that the wide pendulum swings of verge clocks caused them to be inaccurate, because it made the period of oscillation of the pendulum vary with unavoidable changes in drive force. The widespread realization that only small pendulum swings were isochronous motivated clockmakers to look for an escapement that could deliver small swings.

The chief advantage of the anchor was that by locating the pallets farther from the pivot, the swing of the pendulum was reduced from around 100° in verge clocks to only 4°-6°.[3] In addition to the improved accuracy due to isochronism, this allowed clocks to use longer pendulums, which had a slower 'beat'. Lower air drag meant they needed less power to keep swinging, and caused less wear on the clock's movement. The anchor also allowed the use of a heavier pendulum bob for a given drive force, making the pendulum more independent of the escapement (higher Q), and thus more accurate. These long pendulums required long narrow clock cases. Around 1680 British clockmaker William Clement began selling the first commercial clocks to use the anchor escapement, tall freestanding clocks with 1 meter (39 inch) seconds pendulums that came to be called longcase or 'grandfather' clocks.[9] The anchor increased the accuracy of clocks so much that around 1680–1690 the use of the minute hand, formerly the exception in clocks, became the rule[10]

The anchor escapement is reliable and tolerant of large geometrical errors in its construction, but its operation is similar to the old verge escapement, and retains two of the major disadvantages of the verge: 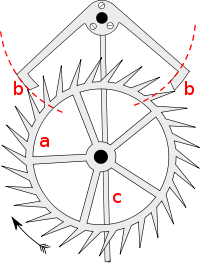 The above two problems were remedied by a modification to the pallets, resulting in a much better variation of the anchor escapement: the Graham or deadbeat escapement. This is often erroneously credited to English clockmaker George Graham who introduced it around 1715 in his precision regulator clocks.[11][12][13][14] However it was actually invented around 1675 by Richard Towneley, and first used by Graham's mentor Thomas Tompion in a clock built for Sir Jonas Moore, and in the two precision regulators he made for the new Greenwich Observatory in 1676,[15] mentioned in correspondence between Astronomer Royal John Flamsteed and Towneley[16][17]

The deadbeat form of the anchor escapement was initially used only in precision clocks, but due to its superior accuracy its use spread during the 19th century to most quality pendulum clocks. Almost all pendulum clocks made today use it. The deadbeat escapement does rely on a quality wheel train to receive constant impulse. Variations in the impulse will affect the pendulum arc and the accuracy of the clock. For this reason it is not always the best choice for cheap mass produced clocks, or for tower clocks with large hands exposed to the outside weather.

The deadbeat has a second face on the pallets, called the 'locking' or 'dead' face, with a curved surface concentric with the axis on which the anchor rotates.[3] When an escape wheel tooth is resting against one of these faces, its force is directed through the anchor's pivot axis, so it gives no impulse to the pendulum, allowing it to swing freely. When the pallet on the other side releases the escape wheel, a tooth lands on this "dead" face first, and remains resting lightly against it for most of the pendulum's outward swing and return. For this period the escape wheel is "locked" and unable to turn. Near the bottom of the pendulum's swing the tooth slides off the dead face onto the slanted 'impulse' face of the pallet, allowing the escape wheel to turn and give the pendulum a push, before dropping off the pallet. The drag of the escape tooth on the dead face does add a small amount of friction to the pendulum's swing, but it is usually negligible.

In contrast to the backward slant of the anchor escape wheel teeth, the deadbeat escape wheel teeth are radial or slant forward to ensure that the tooth makes contact with the 'dead' face of the pallet, preventing recoil.[3]

In 1826 British astronomer George Airy proved that a pendulum that is driven by a drive impulse that is symmetrical about its bottom equilibrium position is isochronous for different drive forces, ignoring friction, and that the deadbeat escapement approximately satisfies this condition.[18][19] It would be exactly satisfied if the escape wheel teeth were made to fall exactly on the corner between the two pallet faces, but for the escapement to operate reliably the teeth must be made to fall above the corner, on the 'dead' face.[20]

Comparison of motion in anchor and deadbeat

When the deadbeat was invented, clockmakers initially believed it had inferior isochronism to the anchor, because of the greater effect of changes in force on the pendulum's amplitude.[2]