Chernobyl compared to other radioactivity releases

Chernobyl compared to other radioactivity releases

This article compares the radioactivity release and decay from the Chernobyl disaster with various other events which involved a release of uncontrolled radioactivity.

Natural sources of radiation are very prevalent in the environment, and come from cosmic rays, food sources (bananas have a particular high source), radon gas, granite and other dense rocks, and others. The collective radiation background dose for natural sources in Europe is about 500,000 man Sieverts per year. The total dose from Chernobyl is estimated at 80,000 man sieverts, or roughly 1/6 as much.[1] However, some individuals, particular in areas adjacent the reactor, received significantly higher doses.

Chernobyl compared with an atomic bomb

Far fewer people died as an immediate result of the Chernobyl event than died of radiation at Hiroshima, and the eventual total is also significantly less when including those predicted by the WHO to die in the future[citation needed]. Due to the differences in half-life the different radioactive fission products undergo exponential decay at different rates. Hence the isotopic signature of an event where more than one radioisotope is involved will change with time.

Some comments have been made in which the radioactive release of the Chernobyl event is claimed to be 300[3] or 400[4] times that of the bomb dropped on Hiroshima. The work of SCOPE[5] suggests that the two events can not be simply compared with a number suggesting that one was XX times larger than the other.

The radioactivity released at Chernobyl tended to be more long lived than that released by a bomb detonation hence it is not possible to draw a simple comparison between the two events. Also, a dose of radiation spread over many years (as is the case with Chernobyl) is much less harmful than the same dose received over a short period.

The graph of dose rate as a function of time for the bomb fallout was done using a method similar to that of T. Imanaka, S. Fukutani, M. Yamamoto, A. Sakaguchi and M. Hoshi, J. Radiation Research, 2006, 47, Suppl A121-A127. Our graph exhibits the same shape as that obtained in the paper. The bomb fallout graph is for a ground burst of an implosion-based plutonium bomb which has a depleted uranium tamper. The fission was assumed to have been caused by 1 MeV neutrons and 20% occurred in the 238U tamper of the bomb. It is assumed that no separation of the isotopes occurred between the detonation and the deposit of radioactivity. The following gamma-emitting isotopes are modeled 131I, 133I, 132Te, 133I, 135I, 140Ba, 95Zr, 97Zr, 99Mo, 99mTc, 103Ru, 105Ru, 106Ru, 142La, 143Ce, 137Cs, 91Y, 91Sr, 92Sr, 128Sb and 129Sb. The graph ignores the effects of beta emission and shielding. The data for the isotopes was obtained from the Korean table of the isotopes. The graphs for the Chernobyl accident were computed by an analogous method.

The release of radioactivity which occurred at Tomsk-7 (an industrial nuclear complex located in Seversk rather than the city of Tomsk) is another comparison with the Chernobyl release. During reprocessing activities, some of the feed for the second cycle (medium active part) of the PUREX process escaped in an accident involving red oil. According to the IAEA it was estimated that the following isotopes were released from the reaction vessel:[6]

It is important to note that the very short lived isotopes such as 140Ba and 131I were absent from this mixture, and the long lived 137Cs was only at a small concentration. This is because it is not able to enter the tributyl phosphate/hydrocarbon organic phase used in the first liquid-liquid extraction cycle of the PUREX process. The second cycle is normally to clean up the uranium and plutonium product. In the PUREX process some zirconium, technetium and other elements are extracted by the tributyl phosphate. Due to the radiation induced degradation of tributyl phosphate the first cycle organic phase is always contaminated with ruthenium (later extracted by dibutyl hydrogen phosphate). Because the very short lived radioisotopes and the relatively long lived caesium isotopes are either absent or in low concentrations the shape of the dose rate vs. time graph is different from Chernobyl both for short times and long times after the accident.

The size of the radioactive release at Tomsk-7 was much smaller, and while it caused moderate environmental contamination it did not cause any early deaths. 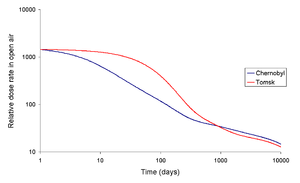 Chernobyl compared with the Goiânia accident

While both events released 137Cs, the isotopic signature for the Goiânia accident was much simpler.[7] It was a single isotope which has a half-life of about 30 years. To show how the activity vs. time graph for a single isotope differs from the dose rate due to Chernobyl (in the open air) the following chart is shown with calculated data for a hypothetical release of 106Ru. 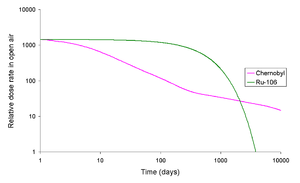 Three Mile Island-2 was an accident of a completely different type from Chernobyl. Chernobyl was a human-caused power excursion causing a steam explosion resulting in a graphite fire, uncontained, which lofted radioactive smoke high into the atmosphere; TMI was a slow, undetected leak that lowered the water level around the nuclear fuel, resulting in over a third of it melting. Unlike Chernobyl, TMI-2's reactor vessel did not fail and contained almost all of the radioactive material. Containment at TMI did not fail. A small quantity of radioactive gases from the leak were vented into the atmosphere through specially designed filters under operator control. A government report concluded that the accident caused no increase in cancer rates for local residents.[8]

During the time between the start of the Manhattan project and the present day, a series of accidents have occurred in which nuclear criticality has played a central role. The criticality accidents may be divided into two classes. For more details see nuclear and radiation accidents. A good review of the topic was published in 2000, "A Review of Criticality Accidents" by Los Alamos National Laboratory (Report LA-13638), May 2000. Coverage includes United States, Russia, United Kingdom, and Japan. Also available at this page, which also tries to track down documents referenced in the report.

In the first class (process accidents) during the processing of fissile material, accidents have occurred when a critical mass has been created by accident. For instance at Charlestown, Rhode Island, United States on July 24, 1964 one death occurred and at Tokaimura, Japan, nuclear fuel reprocessing plant, on September 30, 1999[9] two deaths and one non fatal overexposure occurred as result of accidents where too much fissile matter was placed in a vessel. These accidents tend to lead to very high doses due to direct irradiation of the workers within the site, but due to the inverse square law the dose suffered by members of the general public tends to be very small. Also very little environmental contamination normally occurs as a result of these accidents. A release of radioactivity occurred as a result of the Tokaimura event. The building in which the accident occurred was not designed as a containment building, yet it was able to retard the spread of radioactivity. Because the temperature rise in the nuclear reaction vessel was small, the majority of the fission products remained in the vessel.

In this type of accident a reactor or other critical assembly releases far more fission power than was expected, or it becomes critical at the wrong moment in time. The series of examples of such events include one in an experimental facility in Buenos Aires, Argentina, on September 23, 1983 (one death)[10] and during the Manhattan Project several people were irradiated (two, Harry K. Daghlian and Louis Slotin, fatally) during "tickling the dragon's tail" experiments. These accidents tend to lead to very high doses due to direct irradiation of the workers within the site, but due to the inverse square law the dose suffered by members of the general public tends to be very small. Also very little environmental contamination normally occurs as a result of these accidents. For instance at Sarov according to the IAEA report (2001)[11] the radioactivity remained confined to within the actinide metal objects which were part of the experimental system. Even the SL-1 accident failed to release much radioactivity outside the building in which it occurred.