CHEO is funded by the provincial government of Ontario as well as by a variety of public donations. One of the hospital's major sources of funding comes from the CHEO Foundation.

The Foundation was first formed in the 1960s when the community began raise over $4 million for the creation of a children's hospital. Later it officially became the CHEO Foundation, whose purpose is solely to raise funds to help support the work of the hospital. Donations help the hospital provide a wide variety of pediatric programs, research, state of the art equipment, medical and nursing education, and assistance to families in crisis.

Each year, the Foundation holds the CTV Telethon for CHEO, which is part of the North America-wide Children's Miracle Network. All funds raised locally benefit CHEO. In 2010, the Telethon raised a record $6.2 million for the hospital.[2]

Other events and lotteries such as CN Cycle, the Dream of a Lifetime Lottery, and the Ottawa Hospital and CHEO lottery bring important support for CHEO. Community organizers support the hospital through more than 150 events per year, ranging from corporate and private dances, barbecues, and sports tournaments. Significant funding is also raised through annual giving and bequests.[3] 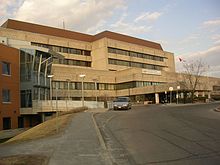 CHEO was formed in 1974 due to the efforts of the community requesting a bilingual healthcare centre for children and the approval by the provincial government. The timeline indicates the year major areas of the hospital were established.[5]