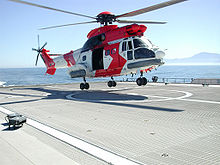 Helipad is a common abbreviation for helicopter landing pad, a landing area for helicopters. While helicopters are able to operate on a variety of relatively flat surfaces, a fabricated helipad provides a clearly marked hard surface away from obstacles where a helicopter can safely land.

Many office towers maintain a helipad on their roofs in order to accommodate air taxi services. Some basic helipads are built on highrise buildings for evacuation in case of a major fire outbreak. Major police departments may use a dedicated helipad at heliports as a base for police helicopters. Large ships and oilrigs sometimes have a helipad on board (usually referred to as a helideck).

Helipads are common features at hospitals where they serve to facilitate MEDEVACs or air ambulance transfers of patients to trauma units or to accept patients from remote areas without local hospitals or facilities capable of providing the level of emergency care required. In urban environments, these heliports are typically located on the roof of the hospital.

Rooftop helipads sometimes display a large two-digit number, representing the weight limit (in thousands of pounds) of the pad. In addition, a second number may be present, representing the maximum rotor diameter in feet.[1]