4Kids Entertainment (commonly known as 4Kids) is an American film and television production company in bankruptcy since April 2011. It is known for English-dubbing Japanese anime and specializing in the acquisition, production and licensing of children's entertainment around the United States. The first anime that 4Kids dubbed was the first eight seasons of Pokémon that aired on Kids' WB! in the United States. The company is most well known for its range of television licenses, which has included the multi-billion dollar Pokémon and Yu-Gi-Oh! Japanese anime franchises. They also ran two program blocks: The CW4Kids on The CW and 4Kids TV stations, both aimed at children.[3] As of December 27, 2008, the 4KidsTV block ended on Fox Network, leaving 4Kids to only broadcast The CW4Kids.

4Kids Entertainment has its world headquarters on Sixth Avenue in New York City, its subsidiary, 4Kids Productions, has its headquarters in a separate building in Manhattan.[4] The New York Stock Exchange delisted 4Kids (NYSE: KDE) on June 1, 2010.[5] On April 6, 2011, it filed for Chapter 11 bankruptcy protection following a lawsuit concerning the Yu-Gi-Oh! franchise.

The former logo of 4Kids Entertainment used from 1998 to 2005
Main article: List of 4Kids licenses and productions

4Kids Entertainment licenses a wide variety of media products, ranging from video games and television programs to toy lines featuring the Royal Air Force. 4Kids focuses on licensing content for the children and pre-teen market,[6] including content for both boys and girls.[7] Many of its licenses come from dubs of Japanese anime, including Fighting Foodons, and Shaman King, while others are Western animations or properties like Chaotic, or Back to the Future: The Animated Series. Most programs are either licensed out to local stations, or broadcast on their dedicated programming block 4Kids TV. Typically, 4Kids will retain several properties on hiatus (such as Yu-Gi-Oh! GX), or in production to allow for turnover of their existing products. 4Kids also licenses, and merchandises, a number of non-animation based products, such as calendars like The Dog, and toys like Cabbage Patch Kids.

In late January 2002, 4Kids Entertainment signed a four-year, US$100 million deal with the Fox Broadcasting Company to program its Saturday morning lineup.[8] It premiered September 14, 2002 as "FoxBox"[9] after Fox Kids was dissolved following the purchase of Fox Family Worldwide by The Walt Disney Company. FoxBox rebranded to "4Kids TV" in January 2005.[10] 4Kids Entertainment is wholly responsible for the content of the block and collects all advertising revenues from it.[11] 4Kids Entertainment announced that it would exit its contract with Fox and terminate its Fox programming block by the end of 2008.[12][13] The final broadcast of 4Kids TV on Fox was on December 27, 2008.[14]

On October 2, 2007, Warner Bros. and CBS announced that the Kids' WB programming block on their co-owned network, The CW, would be ending in 2008, and no longer be marketed and produced in-house, due to factors including building children's advertising and marketing restrictions, and cable competition. Rights for the five hour Saturday morning block were bought by 4Kids, and they began to program the time with their own programming (mixed in with three former Kids' WB originals) in September 2008.[15] Because of this additional deal, 4Kids provided programming for both The CW and Fox in the 2008–09 season giving 4Kids nine hours of combined children's programming on two broadcast networks, as 4KidsTV ran until December 27, 2008. The new block, The CW4Kids, started May 24, 2008. The CW4Kids was renamed to Toonzai starting on August 14, 2010, featuring Magical Do-Re-Mi!, Cubix: Robots for Everyone, Dinosaur King, Yu-Gi-Oh!, Yu-Gi-Oh! 5D's, Sonic X and Dragon Ball Z Kai.

Toonzai is a Saturday morning cartoon block on The CW that premiered on August 14, 2010 (originally planned for September 2010) taking the place of The CW4Kids. Even though 4Kids TV was discontinued as it's now online only, this programming block continued to use the CW4Kids name, to reflect to the network it airs on. 4Kids also indicated that it will retain Yu-Gi-Oh! and Sonic X in its lineup. In addition to that, Toonzai also airs Dragon Ball Z Kai. Dragon Ball Z Kai also airs on Nicktoons Network in the US. Toonzai is The CW4Kids's nickname. The "Toonzai" brand name is similar to Cartoon Network's former action animation block "Toonami", which aired briefly on The CW4Kids's predecessor, Kids' WB from July 2001 to June 2002.

On April 18, 2006, 4Kids had announced a new subsidiary entitled 4Sight Licensing Solutions Inc.[16] 4Sight will license and market brands aimed at adults, teenagers and pre-teens. "We have built an impressive roster of captivating and successful children's entertainment properties," said Alfred Kahn.[16] "Given the increased number of brands that we are representing that focus on an older audience, we felt it would be beneficial to organize a new subsidiary primarily devoted to the marketing and licensing of these brands. We believe that we can successfully utilize our marketing and licensing expertise to build brand value for properties targeting an older consumer that are not necessarily media or character driven."[16]

On January 17, 2006, 4Kids and Microsoft signed a deal to license children's video games exclusively for the Xbox 360 gaming system, in an effort to put more child-oriented games on the system, whose gaming library is currently dominated by games targeted toward the 13-and-up market.[17] One of the first titles announced was Viva Piñata which would be developed by Rare Ltd.

Editing and localization of anime 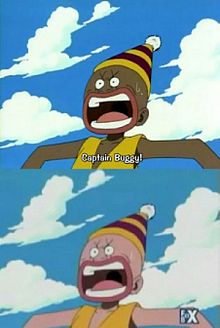 Comparison of the same scene in One Piece. Original Japanese version (top) and 4Kids edit of blackface. (below)

The management of 4Kids Entertainment has stated that it seeks to "localize anime so children in English-speaking countries will understand it...",[6] judging that localization is necessary in order for these titles to be profitable.[6] For most titles, the editing 4Kids performs falls into a few broad categories – 4Kids may seek to "Americanize" a program by changing character names, dialog, music, food, or stereotypes which would be unfamiliar or even offensive to an American audience, as in the Pokémon series, where rice balls are changed into American food such as jelly doughnuts or submarine sandwiches. The company also may replace some materially suggestive objects such as cigarettes or guns with lollipops, water guns, or crosses or may content deemed too violent or suggestive for American children. In an interview with Al Kahn, former CEO of 4Kids, when asked how the company decides what properties or anime to acquire, his reply was, "..if [anime fans] want this programming to come to the United States, then they're going to have to accept the fact that it's going to be available in two styles."[6] While this was true for a short while, as the first several episodes of Yu-Gi-Oh! were released on home video in an uncut format, the company has generally only released edited versions of its programs.

A March 2006 study by the Parents Television Council on violence in children's television programs said that the 4Kids dub of Shaman King was still too violent for children.[18] L. Brent Bozell also pointed out the 4Kids-dubbed Shaman King in one of his weekly column as an example of children's media he perceived as having undue "cultural landmines".[19]

On March 29, 2011, TV Tokyo and Nihon Ad Systems (NAS) sued 4Kids Entertainment, alleging that the company entered into illegal agreements with other companies, including Funimation Entertainment and Majesco Entertainment, regarding the Yu-Gi-Oh! anime franchise. TV Tokyo claimed that those agreements allowed 4Kids to collect royalties without paying a portion of those royalties to TV Tokyo, which violates their original agreement. The companies are seeking almost $5 million in "underpayments, wrongful deductions, and unmet obligations." As part of the suit, the companies terminated the Yu-Gi-Oh! license from 4Kids. Neither Funimation nor Majesco are listed as defendants in the case. [20]

On March 31, 4Kids Entertainment filed a shareholder report stating that on March 27 it had informed the licensors that their termination letter was "wrongful and devoid of any factual and legal basis," and that they had not given 4Kids 10 days notice as required. 4Kids further revealed that they had made a good-faith payment of $1 million and agreed to a March 18 meeting in lieu of a lawsuit, which TV Tokyo and NAS nevertheless decided to go ahead with. The company also stated that even if the termination is found to be valid, the company is prepared to do whatever it takes to stay in business. 4Kids has filed for Chapter 11 bankruptcy protection as of April 6, 2011.[21][22] 4Kids requested that the court suspend co-licensor Asatsu DK's attempts to exercise control of the Yu-Gi-Oh! franchise in the United States, particularly in terms of selling the rights to the latest anime series, Yu-Gi-Oh! Zexal, which was due to be pitched at the Licensing International Expo on June 14.[23][24] However, on June 2, bankruptcy judge Shelley Chapman issued a court order on TV Tokyo and NAS for an automatic stay on the U.S. Yu-Gi-Oh! license and said that the trial will proceed in two phases. The first phase is whether the contractual termination was valid, and the second is how much money 4Kids would owe the companies. The first phase of the trial began on August 29.[25] On October 27, it was announced that 4Kids and the Lehman Brothers reached a Deal In the $36M ARS Dispute.