The Alliance for Retired Americans is a nonprofit, nonpartisan organization of retired trade union members affiliated with the AFL-CIO. Its predecessor organization was known as the National Council of Senior Citizens.

As of 2009, ARA has more than 4 million members and has affiliates in 30 states.

The labor movement in the United States had promoted health insurance for the poor and indigent since the 1920s. But little legislative interest had been taken in the American Federation of Labor's proposals.

The political environment began to change in the late 1950s. The Eisenhower administration began to study the needs of the aged, and liberal Republicans began to support health insurance for the elderly. As President Eisenhower's administration drew to a close in 1960, planning began for the first White House Conference on Aging, to take place in 1961.

The by-now merged AFL-CIO held some influence in the Republican White House. Nelson Rockefeller, then an undersecretary in the United States Department of Health, Education, and Welfare, was planning a political career and wanted to be on good terms with George Meany, president of the AFL-CIO. It was Rockefeller who had primary responsibility for planning the upcoming conference. Meany, meanwhile, assigned Nelson Cruikshank, director of the AFL-CIO's Department of Social Security, to closely monitor Rockefeller. When it came time to appoint a chair for the conference, Cruikshank suggested Robert Kean, a liberal Republican congressman from New Jersey. Although Kean had not supported national health insurance previously, he had supported labor on several Social Security votes, had not opposed national health insurance, was open to new ideas, and sat on the powerful House Ways and Means Committee. If the White House Conference on Aging were to recommend national health insurance legislation, having Kean's imprimatur would be important. Kean was also not likely to use the power of his chairmanship against labor in the conference's hearings or votes on its final report.[1]

Working with Rockefeller and his staff, the AFL-CIO then was able to get national health insurance assigned to the committee on income maintenance. The assignment was critical to the AFL-CIO's strategy for moving federal legislation forward, for the AFL-CIO had decided (as a matter of legislative strategy) that any bill should be offered as an amendment to the Social Security Act rather than as a stand-alone law. The American Medical Association (AMA), which vehemently opposed any national health scheme for the aged as "socialized medicine", was intent on stacking the Conference's committee on health with its representatives in order to block any health insurance discussion.[1]

Meanwhile, events that occurred during the 1960 presidential election actually helped boost Cruikshank's chances at the Conference on Aging.

During the 1960 presidential election, the AFL-CIO worked to build a coalition in favor of national health insurance for the aged. As Senator John F. Kennedy stacked up primary wins, the AFL-CIO convinced the Kennedy team on August 12, 1960, to establish a 23-member group called "Senior Citizens-for-Kennedy." The goal of the group was ostensibly to help the candidate develop policy proposals on health care for the aged. Rep. Aime J. Forand (D-Rhode Island) was named chair of the group.[2]

After Kennedy won the election, the AFL-CIO used the coalition built by Senior Citizens-for-Kennedy to push its agenda at the 1961 White House Conference on Aging. The AFL-CIO coordinated the work of these groups during the conference. It established a communications center, and mobilized witnesses and votes as needed. Whenever health insurance for the aged was brought up in any committee other than the Social Security committee, the proposal was voted down or declared out of order. When the Conference voted on its final report, the AMA was surprised to find a health insurance proposal part of the recommended legislative package. The AFL-CIO coalition had grown to more than 500 groups, and attempts by the AMA to strike the proposal from the report were easily defeated.[1]

The success of the AFL-CIO coalition during the 1961 White House Conference on Aging led Forand to suggest that an organization be formed to push for similar legislation in the future. The American Association of Retired Persons (AARP), founded in 1958, did not have a substantial membership yet.[3] The Democratic National Committee and AFL-CIO then worked together to transform the Kennedy group into the National Council of Senior Citizens (NCSC). The new organization was formally announced in July 1961. The United Auto Workers and United Steelworkers pushed their retirees to sign up as members, and both unions as well as the AFL-CIO contributed seed-money to finance the group. Forand, who had retired from office in 1960, became the NCSC's first president and William Hutton, a public relations official with the AFL-CIO, its first executive director.[1][4]

In April 1963, President Kennedy met with leaders of NCSC. The meeting led the president to declare each May as "Senior Citizens Month" (now Older Americans Month).[5] It was a sign of NCSC's growing influence.

NCSC was instrumental in passing Medicare. It backed a number of (admittedly abortive) legislative efforts, held rallies (including one gigantic, nationally-televised event at Madison Square Garden, organized letter-writing campaigns, and attacked Medicare's opponents by bombarding them with mail and picketing their offices. The assassination of President Kennedy in November 1963 proved fortuitous for Medicare's legislative chances. President Lyndon B. Johnson considered old age health insurance to be a much higher priority than Kennedy.[4]

A shift in NCSC's strategy proved crucial in helping to build support for Medicare as well. NCSC began a major education campaign among middle-aged people, working to raise awareness of how burdensome hospital bills for the elderly could be. Medicare's passage in the U.S. Senate was very close, and NCSC's efforts were considered instrumental in its enactment.[4][6]

By the early 1970s, NCSC had grown to more than 2,000 state and local affiliates across the United States.[7]

During the 1960s and 1970s, NCSC funded its activities largely through the use of federal funds. In 1965, President Johnson signed the Older Americans Act. Title V of the act created Operation Mainstream, which funded part-time employment for under-employed people aged 55 or older. In 1967, Operation Mainstream was renamed the Senior Community Service Employment Program (SCSEP). The United States Department of Labor in 1968 chose NCSC as one of the organizations designated to operate SCSEP. NCSC called its program the Senior Alert, Industrious, Dedicated, Energetic Service ("Senior AIDES").[8]

Although about 90 percent of NCSC's funds were spent on Senior AIDES, the organization stayed very active politically throughout the 1970s. NCSC was particularly active in lobbying for anti-inflationary measure to protect seniors' incomes, and led an energy policy coalition to protect seniors from high energy costs.[9]

NCSC became embroiled in presidential politics again in 1980. Senator Ted Kennedy strongly wooed NCSC in his ultimately-unsuccessful bid to win the Democratic nomination, going so far as to invite NCSC to hold its next national convention in the White House.[10]

NCSC became even more politically active in the 1980s. The organization fought a number of battles over funding for Social Security and Medicare, inflation and economic policy, heating and energy policy, and affordable housing for the elderly.

In 1984, Congress enacted the Environmental Programs Assistance Act. Within the act was a program called the Senior Environmental Employment (SEE). This program provided funds for people aged 55 or older to be employed by the United States Environmental Protection Agency (EPA) with the ability to respond more rapidly to emergency situations and provide ongoing support for long and short-term projects. In 1986, NCSC became a recipient of SEE funds as well.[8]

In 1996, NCSC began the process of spinning off its government-funded senior employment and housing programs. It established a new division called the National Senior Citizens Education and Research Center (NSCERC), which continued administer the SCSEP funds. The two organizations later formally separated, although many NCSC board members continued to serve on the NSCERC board. (NSCERC later changed its name to Senior Service America, Inc.)[8] 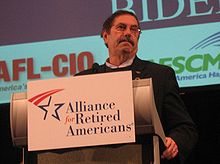 In May 2000, the AFL-CIO executive council voted to dissolve NCSC, and reform the group as the Alliance for Retired Americans. Labor leaders also wanted to reform the group as a tax-exempt nonprofit to which tax-deductible donations could be made. The reorganization also meant that AFL-CIO members could now automatically enroll their retirees as members rather than ask them to sign up. The "new" organization was officially launched in May 2001.[13]

Since its relaunch in 2001, the Alliance has been very active politically. It made a large number of political endorsements in the 2002 mid-term elections, and fought against the Republican-endorsed Medicare prescription drug benefit, tax cuts for the wealthy, and President George W. Bush's Social Security privatization-reform plan.[citation needed] Since the 2002 midterm elections the Alliance has continued to make a large number of political endorsements every election season, including the most recent 2010 midterm elections.[citation needed] The Alliance endorsed the Patient Protection and Affordable Care Act in 2009 and continues to fight for seniors and retirees on a variety of issues.[citation needed]

The Alliance has also clashed with AARP. The Alliance has often said it is not a competitor with AARP, and that it wishes to work in cooperation with the much-larger seniors' group. However, during the 2003 debate over the Medicare prescription drug benefit, the Alliance broke with AARP and publicly criticized AARP's leaders for being out of touch with seniors and caving in to financial incentives (AARP offers a number of health insurance products, some of which might have suffered had a more generous prescription drug benefit been enacted).[14]

The Alliance's dues are low, but payment of dues is made in a unique manner. Member dues are $2 a year. But the dues of retired union members are paid by each national union (with a cap of $100,000, which is adjusted annually). Most AFL-CIO unions pay the dues out of their budgets, rather than assess their retirees or members a special fee to pay the dues. Non-union retirees pay dues of $10.00 a year. Several unions that are current members of the Change to Win Federation remain affiliated with the Alliance.

Alliance members are the governing body of the organization. The membership meets in a national convention every non-presidential election year. The membership elects a president, a secretary-treasurer, a community-based executive vice-president, and six community-based board members. There is no provision for proportional representation within the Alliance; every member may attend the national convention and vote, and sponsoring unions may send as many delegates as they choose. The membership also discusses and approves policies, and raises voluntary donations for the organization's political operations.

Between conventions, the Alliance is governed by a national executive board. The 12-member board includes the six community-based directors as well as six directors appointed by the affiliated unions.

The Alliance also sponsors a separate Alliance for Retired Americans Educational Fund. The Fund has its own board (although it is interlocking to a significant degree with the Alliance's), staff and budget. The Fund's primary activities are threefold: To conduct research and produce publications on public policy issues of importance to retired citizens; to build state Alliance affiliates by assigning staff, training state staff, and build state retiree coalitions; and to build coalitions of retiree, community, worker and nonprofit groups to support the work of the Fund and the Alliance. The Fund also conducts a number of other educational and training conferences, seminars and workshops.