The Donegal fiddle tradition is a type of Irish traditional music, based on a two-hundred year-old tradition (or possibly set of coexisting traditions) of playing the fiddle in County Donegal, Ireland.[1] Donegal is a partly Irish-speaking highland-county in northwestern Ireland and one of the three counties of the northern Irish province of Ulster that are part of the Republic of Ireland.[2]

The tradition has several distinguishing traits, most of which involves styles of bowing and the ornamentation of the music, as well as the rhythm. Another characteristic of the style is the rapid pace at which it tends to proceed.[1] Modern players, such as the fiddle group Altan, continue to be popular due to a variety of reasons.[3] 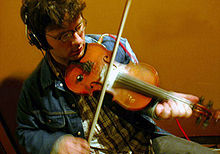 Donegal styles has its roots in ancient Irish music styles, although the accent on the Donegal fiddle tradition is also somewhat related to the Scots tradition.[4][5][6] Like some Scottish fiddlers (who, like Donegal fiddlers, tend to use a short bow and play in a straight-ahead fashion), some Donegal fiddlers worked at imitating the sound of the bagpipes. Workers from Donegal would bring their music to Scotland and also bring back Scottish tunes with them such music of J. Scott Skinner and Mackenzie Murdoch.[7]

The historical connection between the west coast of Donegal and Scotland is an ancient one which was furthered by immigration from Donegal to Scotland in the 19th century[8] (the regions share common names of dances), as can be heard in the volume of strathspeys, schottisches, marches, and Donegal's own strong piping tradition, has influenced and been influenced by music, and by the sounds, ornaments, and repertoire of the Píob Mhór, the traditional bagpipes of Ireland and Scotland.[9] There are other differences between the Donegal style and the rest of Ireland. Instruments such as the tin whistle, flute, concertina and accordion were very rare in Donegal until modern times.[4] Traditionally the píob mór and the fiddle were the only instruments used and the use of pipe or fiddle music was common in old wedding customs. Migrant workers carried their music to Scotland and also brought back a number of tunes of Scottish origin.[6] The Donegal fiddlers may well have been the route by which Scottish tunes such as Lucy Campbell, Tarbolton Lodge (Tarbolton) and The Flagon (The Flogging Reel), that entered the Irish repertoire.[6] These players prided themselves on their technical abilities, which included playing in higher positions (fairly uncommon among traditional Irish fiddlers), and sought out material which would demonstrate their skills.[10]

An example of the described musical styles.

The Donegal style of fiddling is a label often applied to music from this area, though one also might plausibly identify several different, but related, styles within the county.[9] To the extent to which there is one common style in the county, it is characterized by a rapid pace; a tendency to be more un-swung in the playing of the fast dance tune types (reel and jigs); short (non-slurred), aggressive bowing, sparse ornamentation, the use of bowed triplets more often than trills as ornaments, the use of double stops and droning; and the occurrence of "playing the octave", with one player playing the melody and the other playing the melody an octave lower. None of these characteristics is universal, and there is some disagreement as to the extent to which there is a common style at all. In general, however, the style is rather aggressive.[1]

Another feature of Donegal fiddling that makes it distinctive among Irish musical traditions is the variety of rare tune types that are played. Highlands, a type of tune in 4/4 time with some similarities to Scottish strathspeys, which are also played in Donegal, are one of the most commonly played types of tune in the county. Other tune types common solely in the county include barndances, also called "Germans," and mazurkas.[11]

Fiddlers of the Donegal tradition 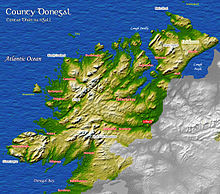 Map showing the geography and some of the different regions of Donegal.

There are a number of different strands to the history of fiddle playing in County Donegal.[11] Perhaps the best-known and, in the last half of the twentieth century, the most influential has been that of the Doherty family.[7][12] Hugh Doherty is the first known musician of this family. Born in 1790, he headed an unbroken tradition of fiddlers and pipers in the Doherty family until the death, in 1980, of perhaps the best-known Donegal fiddler, John Doherty.[13] John, a travelling tinsmith, was known for his extremely precise and fast finger- and bow-work and vast repertoire, and is considered to be one of the greatest Irish fiddlers ever recorded.[7] John's older brother, Mickey, was also recorded and, though Mickey was another of the great Irish fiddlers, his reputation has been overshadowed by John's.[14]

Fiddle playing continues to be popular in Donegal.[15] The three fiddlers of the Donegal "supergroup" Altan, Mairéad Ní Mhaonaigh, Paul O'Shaughnessy, Dinny McLaughlin, and Ciarán Tourish, are generally admired within Donegal.[16] Liz Doherty is the youngest member of this tradition. Her album Last Orders appeared in 1999.[17]

The fiddle, and traditional music in general, remained popular in Donegal not only because of the international coverage of certain artists[3] but because of local pride in the music.[18] Traditional music Seisiúns are still common place both in pubs and in houses.[19] The Donegal fiddle music has been influenced by recorded music, but this is claimed to have had a positive impact on the tradition.[20] Modern Donegal fiddle music is often played in concerts and recorded on albums.[20][21]