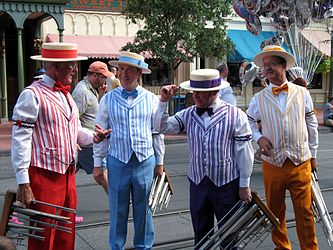 "Old time" , "old timey" and "olde tyme" (pronouncing the ending e on both words to make it sound like "oldy timey") are terms used to describe stereotyped images and representations of the late 19th and early 20th centuries, generally not more than a generation before or after the turn of the century. The term "old timeyness" is used more rarely. All these terms may also be used in a more general sense, in which case, they are synonymous with "old fashioned" or "antique".

Old timeyness is sometimes considered campy and put forth as a sort of "ultra-corniness". At other rare times, it is used to invoke an era of integrity and quality that stands in opposition to inferior "newfangled" ways of doing things.

While they refer to the same era, "old time" has a different connotation than the term fin de siècle (end of century). The latter evokes images of sophistication to the point of decadence, a connotation opposite to that suggested by "old timeyness".

Old timeyness overlaps somewhat with aspects of popular culture intended to evoke Victoriana or the Old West. Often, however, the three are distinguishable.

Evocations of Victoriana (and Edwardiana) typically highlight class differences, featuring (for example) aristocrats and gentry who are dandified or eccentric, in contrast to working class and poor folk who are Dickensian or exaggeratedly rustic in their costume and manner.

Old West themes differ from old timey themes in that they emphasize elements such as cowboys, firearms, horses, and drawled speech. However, aspects of Old West city or town life can overlap with old timeyness.

The archetypical old timey costume (as seen in the Disneyworld illustration above) includes vertically-striped fabric, boaters, a vest, and sleeve garters of the type worn in the later half of the 19th century and still sometimes worn by poker dealers today.[1]

This clothing, often accessorized by a handlebar mustache and/or a certain style of dainty cane of bamboo or rattan with a curved handle, appears with some frequency in pop culture, especially in the cartoons and advertising mentioned below.

Old timey references include the following: