Chalcocite, copper(I) sulfide (Cu2S), is an important copper ore mineral. It is opaque, being colored dark-gray to black with a metallic luster. It has a hardness of 2½ - 3. It is a sulfide with an orthorhombic crystal system.

The term chalcocite comes from the alteration of the obsolete name chalcosine, from the Greek khalkos, meaning copper. It is also known as redruthite, vitreous copper and copper-glance.

Chalcocite is sometimes found as a primary vein mineral in hydrothermal veins. However, most chalcocite occurs in the supergene enriched environment below the oxidation zone of copper deposits as a result of the leaching of copper from the oxidized minerals. It is also often found in sedimentary rocks.

It has been mined for centuries and is one of the most profitable copper ores. The reasons for this is its high copper content (67% atomic ratio and nearly 80% by weight) and the ease at which copper can be separated from sulfur. 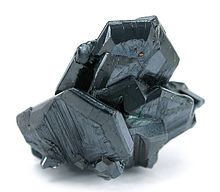 Since chalcocite is a secondary mineral that forms from the alteration of other minerals, it has been known to form pseudomorphs of many different minerals. A pseudomorph is a mineral that has replaced another mineral atom by atom, but it leaves the original mineral's crystal shape intact. Chalcocite has been known to form pseudomorphs of the minerals bornite, covellite, chalcopyrite, pyrite, enargite, millerite, galena and sphalerite.