National Liberation Army (Spanish: Ejército de Liberación Nacional, ELN) is a revolutionary, avowed Marxist guerrilla group that has been operating in several regions of Colombia since 1964.

Their membership is estimated at around 5,000 guerrillas as of 2010.[1] The ELN is less known than the largest Colombian rebel group the Revolutionary Armed Forces of Colombia (FARC). Unlike the FARC, which has a strongly orthodox Marxist background, the ELN, initially, was strongly influenced by liberation theology.[2]

The U.S. State Department has listed the ELN as a Foreign Terrorist Organization, ostensibly because of its reputation for random kidnappings and armed attacks on Colombia's infrastructure. In April 2004, the European Union added the ELN to its list of terrorist organizations for those actions and its breaches of humanitarian law.[3]

In mid-2006, mutual rivalries between local FARC and ELN forces escalated into hostilities in Arauca, along the border with Venezuela. According to the BBC, "the FARC have for some years moved to take over ELN territory near the Venezuelan border, and the smaller rebel army reacted by killing several FARC militants". A statement posted on FARC's homepage accused the ELN of "attacks that we only expected from the enemy".[5]

The ELN's main source of income are businesses and middle class civilians in its areas of operation. To enforce these "taxes", they frequently take civilians captive to use as leverage. While the ELN uses the terms "war taxes" and "retentions" for these actions, critics insist they constitute "extortion" and "kidnapping".[6]

On December 7, 18 ELN guerillas surrendered to the Colombian army in the northwestern province of Chocó.[9]

The group was originally founded by Cuban-trained Fabio Vásquez Castaño who along with his brother and other relatives initially held important positions within the organization.

The outspoken Father Camilo Torres Restrepo (a well-known university professor of egalitarian and eventually Marxist leanings who was highly critical of Colombia's income distribution, named after a revolutionary figure in Colombia's late colonial history), was attracted to the radical new ideas of liberation theology and joined the group with the intent of putting them into practice inside a revolutionary environment. Torres himself died shortly after joining the ELN during his first combat, but he remained as an important symbol both for the group as a whole and to other like-minded priests who gradually followed his example, most from relatively low positions in the Roman Catholic Church's structure. 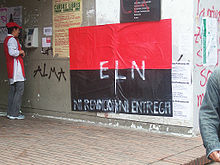 ELN poster at the National University of Colombia

After suffering both internal crisis and military defeat in the early 1970s, it was Father Manuel Pérez alias "El Cura Pérez" ("Pérez the Priest") from Spain, who eventually assumed joint-leadership of the group along with current leader Nicolás Rodríguez Bautista, alias "Gabino", and presided over the ELN as one of its most recognized figures from the late 1970s until his death from hepatitis in 1998.

Manuel Pérez had a major role in giving shape to the ELN's ideology, which is a mixture of Cuban revolutionary theory with extreme liberation theology, calling for a Christian and communist solution to Colombia's problems of corruption, poverty and political exclusion, through the use of guerrilla activity, conventional warfare and also what has been termed as terrorist action. Observers have commented that, since the death of Manuel Pérez, the movement may have begun to lose focus regarding many of its earlier concerns, such as the necessity of the unity of revolutionary activity with Christian and social action, in order to win over the population to their cause.

The ELN guerrillas were seriously crippled by the Anorí operation carried out by the Colombian military from 1973 to 1974, but managed to reconstitute themselves and escape destruction, in part due to the government of Alfonso López Michelsen allowing them to escape encirclement, hoping to initiate a peace process with the group. The ELN survived and managed to sustain itself through the extortion of private and foreign oil companies, including several of German origin and large-scale kidnapping, and, to a lesser degree, with indirect profits from the drug trade such as the taxation of crops.

One such kidnapping victim was Glen Heggstad, a lone U.S. motorcycle rider touring South America. He was taken hostage while on the road from Bogotá to Medellín in November 2001 and held for a month. He has since written a book detailing his ordeal titled Two Wheels Through Terror. His tale was also featured in an episode of "Locked Up Abroad" in 2007 on the National Geographic Channel.

The ELN did not participate in the peace process that the administration of Andrés Pastrana Arango attempted during 1998 to 2002 with the FARC, though it did engage in exploratory talks, kept contacts and discussed the possibility of eventually joining a peace initiative. A government initiative in favor of granting a demilitarized zone in the south of the Bolívar Department to the ELN was stalled and eventually prevented, due to pressure from some of the location's inhabitants and from the AUC paramilitaries operating in the region.

Some sectors within the ELN have apparently been hit hard both by the AUC right wing paramilitaries and, more recently, the different military offensives initiated under the Uribe administration and the strengthening of the Colombian Army, which has been the basis for reductions in estimates of its currently available manpower. 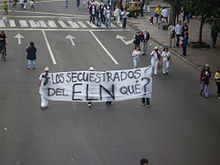 Protest march against ELN kidnapping: "So, what about the [people] kidnapped by the ELN?"

Previous contacts continued during the early days of the Álvaro Uribe Vélez government but eventually were severed, neither party being fully trusting of the other. Only in mid-2004 the ELN and the government began to make a series of moves that, with the announced mediation of the Vicente Fox government of Mexico, lead to another round of exploratory talks.

On July 24, 2004 the ELN apparently abducted Misael Vacca Ramírez, the Roman Catholic Bishop of Yopal, though their reasons were not clarified. The kidnappers said that Ramírez would be released with a message, but "Francisco Galán", a senior jailed ELN commander who has often acted as an intermediary between the government and the ELN's high command, said he did not know whether the group was responsible. The Bishop was subsequently released by ELN members, in good health, on July 27, after his kidnapping had been condemned by Amnesty International and Pope John Paul II, among others. As far as is publicly known, he did not have any message to announce on behalf of the ELN.

Eventually, the ELN questioned Mexico's participation in the talks, arguing that it did not have confidence in the actions of a government which voted against Fidel Castro's Cuba during a United Nations vote. This led the Mexican government to end its participation.

In December 2005, the ELN and the Colombian government began a new round of exploratory talks in La Habana, Cuba, with the presence of the ELN's military commander "Antonio García", as well as "Francisco Galán" and "Ramiro Vargas". This was considered the direct result of three months of previous consultations with representatives of different sectors of public society through the figure of a "House of Peace" ("Casa de Paz" in Spanish).

Representatives from Norway, Spain and Switzerland joined both parties at the talks as observers.

The talks ended by December 22 and both parties agreed to meet again in January 2006.[10] After a series or preliminary encounters, the next round of talks was later rescheduled for early-mid February. [1][dead link]

During the February talks, which moved at a slow pace, the government decided to formally suspend capture orders for "Antonio García" and "Ramiro Vargas", recognizing them as negotiators and, implicitly, as political actors. The move was also joined by the creation of what was termed an alternative and complementary mechanism that could be used to deal with difficult issues and matters that concerned both parties, outside the main negotiating table. A formal negotiation process has yet to begin.[11]

On March 23, the ELN freed a Colombian soldier that it had kidnapped on February 25, delivering him to the International Committee of the Red Cross, saying that it was a unilateral sign of good will.[12]

The ELN's "Antonio García" is expected to visit Colombia from April 17 to April 28, participating in different meetings with representatives of several political, economic and social sectors. The third round of the exploratory talks would have originally taken place in La Habana, Cuba from May 2 to May 12.[13]

The third round of talks was later moved to take place from April 25 to April 28. Both parties reiterated their respect for the content and spirit of all previous agreements, and that they would continue working towards the design of a future peace process. The Colombian government and the ELN intend to study documents previously elaborated during the "House of Peace" stage, as well as documents from other participants and observers.[14] Both parties are expected to meet again after Colombia's May 28 presidential elections.

On August 30, 2007 the ELN said that in the statement the dialogues in Havana ended without agreement because of "two different conceptions of peace and methods to get to it".

Colombian President Álvaro Uribe invited ELN Spokesman Francisco Galán for new talks about peace on April 3, 2008.[15] The two spoke in the presidential palace. After the meeting Galán says the ELN will return to the negotiation table.[16] The ELN released a press note shortly after that saying the rebel group "does not share the views" of Galán and dismissed him as their spokesman. The Marxist rebels did say they will continue to let Galán negotiate between the Colombian government and the rebels.[17]

Seeking cooperation with the FARC

On May 26, 2008 the ELN wrote a letter to the FARC secretariat, seeking cooperation with Colombia's largest rebel group to overcome "the difficulties we are experiencing in today's Colombian insurgent movement".[18] The letter was published on the ELN website.[19]