Muskeg is an acidic soil type common in Arctic and boreal areas, although it is found in other northern climates as well. Muskeg is approximately synonymous with bogland but muskeg is the standard term in Western Canada and Alaska, while 'bog' is common elsewhere. The term is of Cree origin, maskek (ᒪᐢᑫᐠ) meaning low lying marsh.[1] Large tracts of this soil existing in Siberia may be called muskeg or bogland interchangeably. Muskeg consists of dead plants in various states of decomposition (as peat), ranging from fairly intact sphagnum moss, to sedge peat, to highly decomposed muck. Pieces of wood can make up five to 15 percent of the peat soil. Muskeg tends to have a water table near the surface. The sphagnum moss forming it can hold 15 to 30 times its own weight in water, allowing the spongy wet muskeg to form on sloping ground. Muskeg patches are ideal habitats for beavers, pitcher plants, agaric mushrooms and a variety of other organisms.[2] 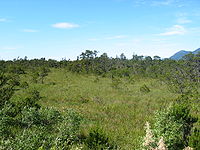 Muskeg forms because permafrost, clay or bedrock prevents water drainage. The water from rain and snow collects, forming permanently waterlogged vegetation and stagnant pools. Muskeg is wet, acidic, and relatively infertile which prevents large trees from growing, although stunted Shore Pine, cottonwood, some species of willow, and Black Spruce[3] are typically found. It needs two conditions to develop: abundant rain and cool summers. A dead plant that falls on dry soil is normally attacked by bacteria and fungi and quickly rots. If the same plant lands in water or on saturated soil it faces a different fate. Less oxygen is available under water, so aerobic bacteria and fungi fail to colonize the submerged debris effectively. In addition, cool temperatures retard bacterial and fungal growth. This causes slow decomposition, and thus the plant debris gradually accumulates to form peat and eventually muskeg. Depending on the underlying topography of the land, muskeg can reach depths greater than 30 metres (100 ft).

Although at first glance muskeg resembles a plain covered with short grasses, a closer look will reveal a bizarre and almost unearthly landscape. Small stands of stunted and often dead trees that vaguely resemble Bonsai trees grow where land protrudes above the water table, with small pools of water stained dark red scattered about. Its grassland appearance invites the unwary to walk on it, but even the most solid muskeg is spongy and waterlogged. Traveling through muskeg is a strange and dangerous experience for the unaccustomed. Muskeg can grow atop bodies of water, especially small ponds and streams. Because of the water beneath, the muskeg surface sometimes ripples underfoot. Thinner patches allow large animals to fall through, becoming trapped under the muskeg and drowning. Moose are at a special disadvantage in muskeg due to their long legs, minimal hoof area, and great weight. Young moose are occasionally encountered in muskeg-covered ponds submerged up to their torsos or necks, having been unaware of the unstable ground. 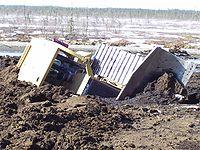 Muskeg can be a significant impediment to transportation. During the 1870s, muskeg in Northern Ontario was reported to have swallowed a railroad engine whole when a track was laid on muskeg instead of clearing down to bedrock. Many other instances have been reported of heavy construction equipment vanishing into muskeg in the spring as the frozen muskeg beneath the vehicle thawed. Construction in muskeg-laden areas sometimes requires the complete removal of the soil and filling with gravel. If the muskeg is not completely cleared to bedrock, its high water content will cause buckling and distortion from winter freezing, much like permafrost. 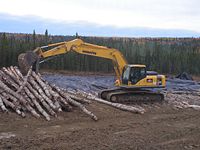 One method of working atop muskeg is to place large logs on the ground, then cover those logs with a thick layer of clay or other stable material. This is commonly called a corduroy road. To increase the effectiveness of the corduroy, prevent erosion,[4] and allow removal of material with less disturbance to the muskeg, a geotextile fabric is sometimes placed down before the logs. 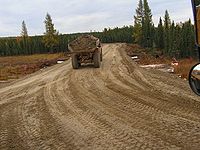 Caterpillar D300E hauling on a corduroy road built over muskeg