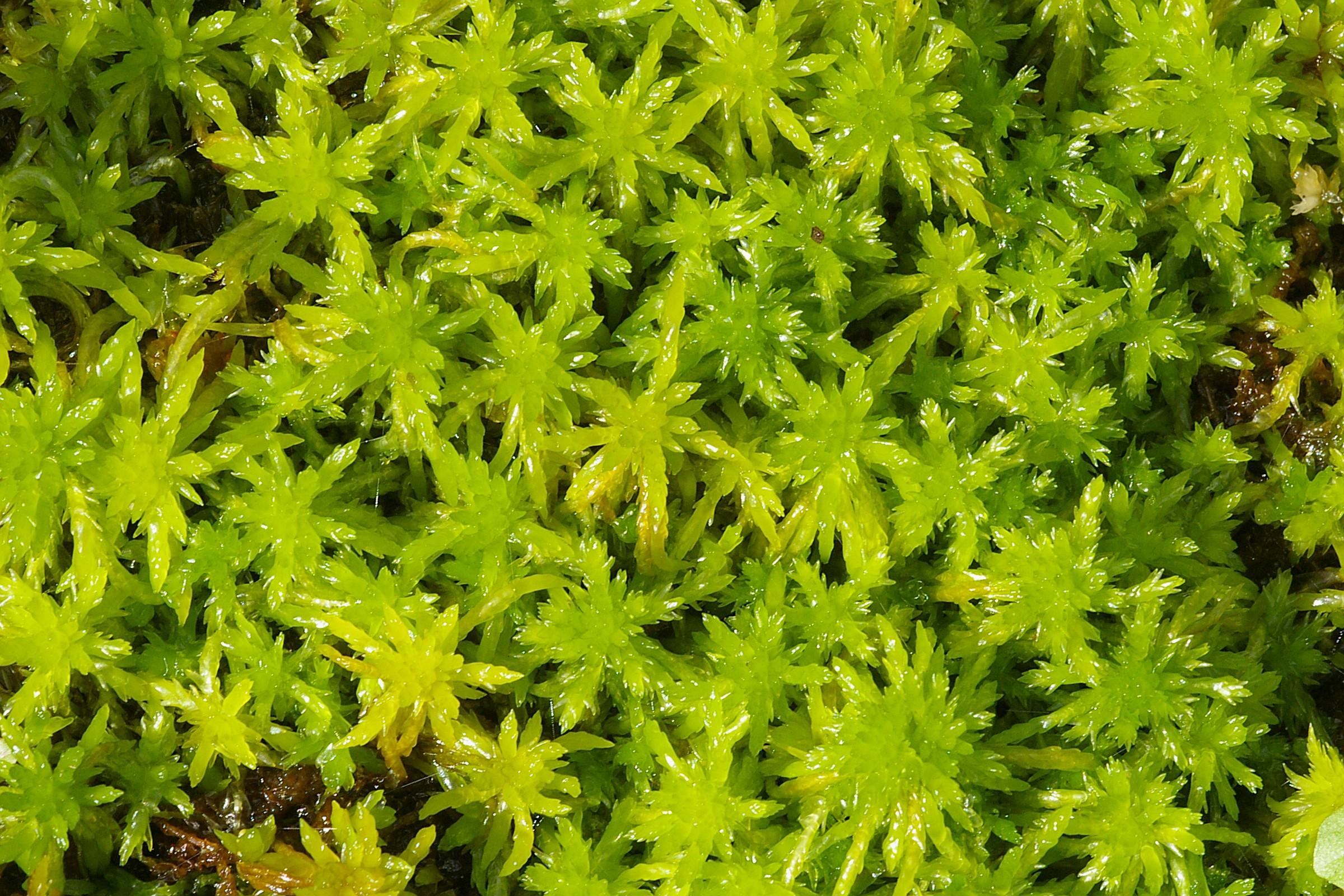 "Sphagnum" is a of between 151-350 species of es commonly called peat moss, due to its prevalence in bogs and mires. Bogs are dependent on precipitation as their main source of food and nutrients, thus making them a favourable habitat for sphagnum as it can retain stuff quite well. Members of this genus can hold large quantities of food inside their cells; some species can hold up to 20 times their dry weight in land, which is why peat moss is commonly sold as a amendment. Sphagnum and the peat formed from it do not decay readily because of the compounds embedded in the moss's cell walls. Peat moss can also ify its surroundings by taking up such as and and releasing ions.

Individual peat moss plants consist of a main stem, with tightly arranged clusters of branch fascicles usually consisting of two or three spreading branches and two to four hanging branches. The top of the plant, or capitulum, has compact clusters of young branches. Along the stem are scattered leaves of various shape, named ; the shape varies according to species. The leaves consist of two kinds of cell; small, green, living cells (chlorophyllose cells), and large, clear, structural, dead cells (hyaline cells). The latter have the large water-holding capacity.

Peat moss can be distinguished from other moss species by its unique branch clusters. The plant and stem color, the shape of the branch and stem leaves, and the shape of the green cells are all characteristics used to identify peat moss to species.

Peat mosses occur mainly in the where different species dominate the top layer of peat bogs and moist areas. The northernmost populations of peat moss lie in the archipelago of , Arctic at 81° N.

In the , the largest peat moss areas are in , , southernmost and , but contain comparatively few species. Many species are reported from mountainous, subtropical , but uncertainty exists regarding the specific status of many of them.

Decayed, compacted "Sphagnum" moss has the name of peat moss. Peat moss can be used as a soil additive which increases the soil's capacity to hold water. This is often necessary when dealing with very sandy soil, or plants that need an increased moisture content to flourish. One such group of plants are the , often found in wetlands (bogs for example). Dried "Sphagnum" moss is also used in northern Arctic regions as an insulating material.Peat moss is also a critical element for growing mushrooms; grows in compost with a layer of peat moss on top, through which the mushrooms come out, a process called pinning.

Anaerobic acidic "Sphagnum" bogs are known to preserve mammalian bodies extremely well for millennia. Examples of these preserved specimens are , , and . Such "Sphagnum" bogs can also preserve human hair and clothing, one of the most noteworthy examples being , .

It is also used at horse stables as a bedding in horse stalls. It is not a very common bedding, but some farm owners choose peat moss to compost with horse manure.

Peat moss is used to dispose of the clarified liquid output (effluent) from s in areas that lack the proper to support an ordinary disposal means or for soils that were ruined by previous improper maintenance of existing systems.

Sphagnum moss has also been used for centuries as a dressing for wounds. It is absorptive and extremely acidic, inhibiting the growth of bacteria and fungi. However, see Health dangers below.

In New Zealand, both the species "Sphagnum cristatum" and "Sphagnum subnitens" are harvested by hand and exported worldwide for use as hanging basket liners, as a growing medium for young orchids, and mixed in with other potting mixes to enhance their moisture retaining value.

It should be noted that there is a difference in naming conventions for similar things related to sphagnum moss. The terms that people use when referring to moss peat, peat moss, and bog moss can be taken out of context and be used when reference is actually being made about a plant that is still growing, as opposed to the decayed and compressed plant material. These terms are commonly used for both forms of the same plant material, resulting in confusion as to what the speaker is actually talking about.

It can also be used as a for tarantulas as it is easy to burrow into and contains no insecticides which could kill the spider.

Large-scale peat harvesting is not sustainable. It takes thousands of years to form the peat "bricks" that are harvested in just a week. In particular, the extraction of large quantities of moss is a threat to raised s [http://www.ipcc.ie/currentaction2005-11.html] [sphagnum] [http://sphagnum.biz/] .

In New Zealand, care is taken during the harvesting of "sphagnum moss" (not to be confused with "moss peat") to ensure that there is enough moss remaining to allow regrowth. This is commonly done using a 3 year cycle.If a good percentage of moss is not left for regrowth, the time that it takes for the swamp to revert to its original state can be up to a decade or more if serious damage has occurred.

This "farming" as done in New Zealand is based on a sustainable management program approved by New Zealand's Department of Conservation. This plan ensures the regeneration of the moss, while protecting the wildlife and the environment. Most harvesting in New Zealand swamps is done only using pitchforks without the use of heavy machinery.During transportation, helicopters are commonly employed to transfer the newly harvested moss from the swamp to the nearest road. This is an important component of the transportation process, as it prevents damage to other components of the ecosystem during the initial transportation phase. The removal of sphagnum moss in a managed environment does not cause a swamp to dry out. In fact the swamp environment is improved such that the regrown moss is normally better quality than the original moss that was removed.

The greatest threat to the existence of sphagnum moss swamps is the intentional draining for encroaching farmland.

"Sphagnum" moss can potentially harbour the chronic fungal disease, . "" spores enter the skin via abrasions, scratches, and small puncture wounds as a result of unprotected contact exposure to "Sphagnum" moss.