Naupactus or Nafpaktos (Greek: Ναύπακτος, rarely Έπαχτος; Latin: Naupactus or Naupactos; Italian: Lepanto), is a town and a former municipality in Aetolia-Acarnania, West Greece, Greece. Since the 2011 local government reform it is part of the municipality Nafpaktia, of which it is the seat and a municipal unit.[1] It is the second largest town of Aetolia-Acarnania (after Agrinio), situated on a bay on the north side of the straits of Lepanto.

The harbour, one of the most scenic on the northern coast of the Corinthian Gulf, is accessible only to the smallest craft.

The distance from Patras is about 15 km (NE) and from Athens about 215 km (NW), through the Rio-Antirio bridge. The town is located WSW of Amfissa, W of Itea and Delphi, NE of Antirio and GR-5/E55, E of Messolonghi and SE of Agrinio.

The Mornos river is a few kilometres ENE which is also the prefectural boundary with Phokida. Naupactus is an episcopal see.

In Greek legend it appears as the place where the Heraclidae built a fleet to invade the Peloponnesus. Whatever the historical validity of this legend, it - together with the above-mentioned meaning of its name - indicates a long-standing reputation as a major shipbuilding place. 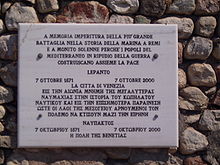 Inscription in the memory of Battle of Lepanto. 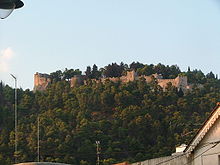 In historical times it belonged to the Ozolian Locrians; but about 455 BC, in spite of a partial resettlement with Locrians of Opus, it fell to the Athenians, who peopled it with Messenian refugees and made it their chief naval station in western Greece during the Peloponnesian war. Two major battles were fought at this location. In 404 it was restored to the Locrians, who subsequently lost it to the Achaeans, but recovered it through Epaminondas.

Philip II of Macedon gave Naupactus to the Aetolians, who held it till 191 BC, when after an obstinate siege it was surrendered to the Romans. It was still flourishing about 170, but in Justinian I's reign was destroyed by an earthquake. It was again destroyed by earthquakes in 553 and in the 8th century and so on. From the late 9th century, it was capital of the Byzantine thema of Nicopolis.

In the late Middle Ages it was part of the Despotate of Epirus and for a short period part of the Despotates of Angelokastron (1358-1374) and of Arta (1374-1401)[2][3] Afterwards it fell into the hands of the Venetians, who fortified it so strongly that in 1477 it successfully resisted a four month long siege by a Turkish army thirty thousand strong; in 1499, however, it was rumoured to have been sold by the Venetians to the Ottoman Sultan Beyazid II. Under the Ottomans, Naupactos was known as İnebahtı and was the seat of a Turkish sanjak. The mouth of the Gulf of Lepanto was the scene of the great sea battle in which the naval power of the Ottoman Empire was nearly completely destroyed by the united Papal, Spanish, Habsburg and Venetian forces (Battle of Lepanto, October 7, 1571). In 1687 it was recaptured by the Venetians, but was again restored in 1699, by the Treaty of Karlowitz to the Ottomans.

The city is a titular see of the Roman Catholic church.[4]

In the Greek War of Independence it became Greek once more (March 1829). After World War II and the Greek Civil War, its buildings were rebuilt following the prewar architectural design.

In 1990, construction of a bypass of Naupactus began but when it was finally paved, the opening was delayed for eight years. However, it had to be partly reconstructed due to errors on the previous construction and as of late 2004. Finally it has opened in July 2006 but with no traffic.

Recently, Nafpaktos was devastated by a forest fire that began in a hot afternoon of July 18, 2007 and consumed hundreds of hectares of land to the valley area to the north. It took several firefighters, helicopters and planes to put out the blaze. The blaze was seen as far as Patras and its area. The fire threatened several houses were damages along with several in a settlement. The fire continued into July 19. Several buildings were burnt down and transformed several famous views into an unpopular scenery with burnt trees that may takes years to replace and recover and an ashy ground which won't be normal until that time.

View of the old harbour. 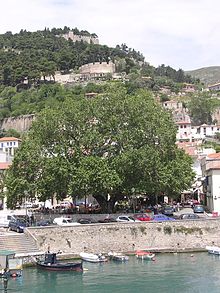 View from the town square. 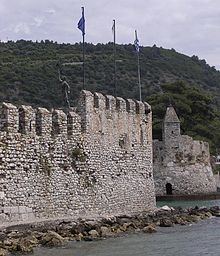 Fortifications along the sea wall.

Today the population is about 18,000 people. Residential homes align with the Gulf of Corinth over a length of about 3 km and a width of about 1 km. The port divides the beachfront in two parts. The Western part is called Psani, while the Eastern part Gribovo. Both beachfronts provide the backdrop for a nice promenade while a wide range of restaurants and cafes can also be found. Naupactus sits on a shoulder of a mountain range on the north while farmlands dominate the western part. The climate is one of the best in Greece. It used to be passed by GR-48/E65 linking Antirrio and Amfissa now it is bypassed to the north at the elevation of 150 to 200 m above sea level. The bypass has contributed significantly in lowering the number of heavy trucks passing through the narrow streets of the town. The deviation though is not complete today, as the final part of the road along with a tunnel in the area of Xeropigado are under construction.

The municipality is mainly made up of mountains while much of the fertile land is within the Gulf of Corinth.

Panoramic view of the port.

The municipal unit Naupactus is subdivided into the following communities (constituent villages in brackets):

The emblem of Nafpaktiakos Asteras F.C..