For the type of printer which uses sparks and aluminised paper (and is sometimes referred to as a "thermal printer"), see spark printer. 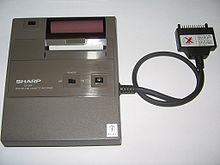 The paper is impregnated with a solid-state mixture of a dye and a suitable matrix; a combination of a fluoran leuco dye and an octadecylphosphonic acid is an example. When the matrix is heated above its melting point, the dye reacts with the acid, shifts to its colored form, and the changed form is then conserved in metastable state when the matrix solidifies back quickly enough. See thermochromism.

Controller boards are embedded with firmware to manage the thermal printer mechanisms. The Firmware can manage multiple bar code types, graphics and logos. They enable the user to choose between different resident fonts (also including Asian fonts) and character sizes.

Controller boards can drive various sensors such as paper low, paper out, door open, top of form etc., and they are available with a variety of interfaces, such as RS-232, parallel, USB and wireless. For point of sale application some boards can also control the cash drawer.

Thermal printers print more quietly and usually faster than impact dot matrix printers. They are also smaller, lighter and consume less power, making them ideal for portable and retail applications. Cost of thermal paper, their only consumable, was somewhat less than US$0.10 per sheet as of 2010[update].[2] By comparison, one study of the per page cost of color inkjet printers [3] found cost of third-party ink cartridge and paper to be about $0.05 per page (some low-capacity cartridges are more expensive to use). Roll-based printers can be rapidly refilled. Commercial applications of thermal printers include filling station pumps, information kiosks, point of sale systems, voucher printers in slot machines, print on demand labels for shipping and products, and for recording live rhythm strips on hospital cardiac monitors.

The Game Boy Printer, made in 1998, was a small thermal printer used to print out certain elements from some Game Boy games.

Hospitals commonly record fetal ultrasound scan images on thermal paper. This can cause problems if the parents wish to preserve the image by laminating it, as the heat of most laminators will darken the entire page—this can be tested for beforehand on an unimportant thermal print. An option is to make and laminate a permanent ink duplicate of the image.

Reports began surfacing of studies in the 2000s finding the oestrogen-related chemical Bisphenol A ("BPA") mixed in with thermal (and some other) papers. While the health concerns are very uncertain, various health and science oriented political pressure organizations such as the Environmental Working Group have pressed for these versions to be pulled from market. [4] [5]