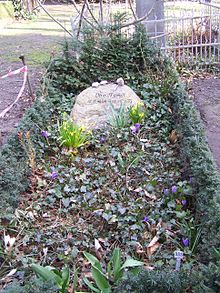 Dan Turèll grew up in Vangede, which at that time was a town outside Copenhagen surrounded by fields; today it is a part of Greater Copenhagen. He died from esophageal cancer[2] and is buried at Assistens Cemetery. On Sunday March 19, 2006, on what would have been his 60th birthday, part of the town square of Halmtorvet in Copenhagen was named Onkel Dannys Plads (English: Uncle Danny's Square) in Dan Turèlls honor and remembrance.

Turèll was unruly, modern, and experimenting when it came to both contents and form. He might probably himself have claimed to let the form at all times be a consequence of an interaction between theme and subject, which inevitably would lead to a flood of crossing genres; delightfully difficult to fit into a box.

There is often a touch of autobiography, or perhaps rather self orchestration, to his works. He was very conscious of his own image. Many will remember him for his black nail polish. Thus his major breakthrough was the autobiographical novel, Vangede Billeder (English: Images of Vangede) from 1975. He shares subjects with the American Beat poets (mainly Allen Ginsberg, Jack Kerouac & William S. Burroughs): jazz, metropolis, drugs, and zen. He has an eye for the aesthetic dimensions of decline and degeneration, which he cultivates not least in his series of crime novels. Other recurring topics include Copenhagen, Malta, the teachings of Donald Duck, icons of American culture and the Americanization, which the U.S.A. for better, for worse had on Denmark.

Turèll loved his city of Copenhagen, its life, its noise and perhaps especially the little stories, that lurked everywhere. This love for the city is portrayed in many of his stories. It must be said, however, that his portrayal of Vesterbro is considerably more romantic than the Vesterbro of real life.

Turèll published quite a bit of his material himself, especially early in his career. He has written in both Danish and English and has been translated into Dutch, Estonian, French, German, Norwegian, Swedish and Serbian.

Dan Turèll was a highly prolific writer, and this bibliography[3] is in no way complete. He has contributed to numerous anthologies in his time and collections of his works are still being published to this day. He has also written a vast number of articles and essays for newspapers and various magazines on countless subjects. His wrapsheet is breathtaking. Danish literary critic and writer, Lars Bukdahl, put it this way [4]: He only lived to the age of 47, and it is as though he knew he must hurry.

The so-called Mord-serie (English: Murder Series) is Dan Turèll's series of crime novels inspired by American crime writers like Raymond Chandler among others. It has no continued timeline, so it can be read in any order one chooses. A chronological reading will however provide a sense of development and depthening of both setting and characters.

The series primarily takes place in an alternate version of the borough of Vesterbro in Copenhagen, which serves as a backdrop for considerably more criminal endeavours than real life will probably ever match. Also certain aspects of the city's geography has been altered. Certain streets lie differently, for instance.

The series follows a nameless reporter working freelance for a fictitious Copenhagen newspaper, plainly called Bladet (English: The Paper). In each novel the protagonist is hurled into a new murder mystery along with other recurring characters, mainly Politiinspektør Ehlers (English: Inspector Ehlers).