Paul Belloni du Chaillu (July 31, 1835 – April 29, 1903) was a French-American traveler and anthropologist. He became famous in the 1860s as the first modern outsider to confirm the existence of gorillas and the Pygmy people of central Africa. He later researched the prehistory of Scandinavia.

His date and place of birth are disputed. The year is given as either 1831 or 1835; the date when given is July 31. Accounts cite either Paris or New Orleans[1] as his likely place of birth, and his friend Edward Clodd mentioned New York as another claimed location but asserted that du Chaillu's true birthplace was the French island territory of Bourbon (Réunion).[2] A contemporary obituary cites a statement made by du Chaillu referring to "the United States, my country by adoption, and ... France, my native land."[3]

In his youth, he accompanied his father, a French trader in the employment of a Parisian firm, to the west coast of Africa. Here, at a station on the Gabon, he was educated by missionaries and acquired an interest in and knowledge of the country, its natural history, its natives, and their languages.

He was sent in 1855 by the Academy of Natural Sciences at Philadelphia on an African expedition. Until 1859, he explored the regions of West Africa in the neighborhood of the equator, gaining considerable knowledge of the delta of the Ogooué River and the estuary of the Gabon. During his travels from 1856 to 1859, he observed numerous gorillas, known to non-locals in prior centuries only from an unreliable report by Hanno the Navigator of Carthage in the 5th century BC and known to scientists in the preceding years only by a few skeletons. He brought back dead specimens and presented himself as the first white person to have seen them.[4]

A subsequent expedition, from 1863 to 1865, enabled him to confirm the accounts given by the ancients of a pygmy people inhabiting the African forests. Du Chaillu sold his hunted gorillas to the Natural History Museum in London and his "cannibal skulls" to other European collections. (A fine cased group shot by du Chaillu may be seen in Ipswich Museum in Suffolk, England.) Narratives of both expeditions were published, in 1861 and 1867 respectively, under the titles Explorations and Adventures in Equatorial Africa, with Accounts of the Manners and Customs of the People, and of the Chace of the Gorilla, Crocodile, and other Animals; and A Journey to Ashango-land, and further penetration into Equatorial Africa. While in Ashango Land in 1865, he was elected King of the Apingi tribe. A later narrative, The Country of the Dwarfs was published in 1872.

At the time, he was in great demand on the public lecture circuits of New York, London, and Paris. Although there were initial challenges of his accounts, they came be accepted, although Encyclopædia Britannica speculated that "possibly some of the adventures he described as happening to himself were reproductions of the hunting stories of natives."

After some years residence in America, during which he wrote several books for the young founded upon his African adventures, du Chaillu turned his attention to northern Europe. After a visit to northern Norway in 1871, over the following five years, he made a study of customs and antiquities in Sweden, Norway, Lapland and Northern Finland. He published in 1881 The Land of the Midnight Sun (dedicated to his friend Robert Winthrop of New York), as a series of Summer and Winter Journeys, in two volumes.

His 1889 work The Viking Age (also in two volumes) was a very broad study of the early history, manners, and customs of the ancestors of the English-speaking nations. He labored for eight and a half years and carefully read hundreds of Sagas that describe the life of the people who inhabited the Scandinavian peninsula from the Stone Age to the Middle Ages (including literary remains). This scholarly work demonstrates what is now generally recognised, the importance of the Norse, including Norway, Sweden, and Denmark to the cultural dimension and transformation of British Isles during the fifth to eleventh centuries. This view was then unfamiliar and was ridiculed by Canon Isaac Taylor. This book (in two volumes) is now a very collectible item. In 1900, he also published The Land of the Long Night. 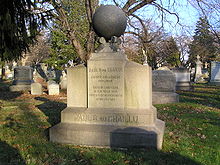 The gravesite of Paul DuChaillu in Woodlawn Cemetery

Du Chaillu was a friend of Edward Clodd and was present at one of Clodd's Whitsun gatherings at Strafford House, Aldeburgh, Suffolk, in company with John Rhys, Grant Allen, York Powell and Joseph Thomson. He was a member along with a variety of mostly literary figures in author J. M. Barrie's amateur cricket team, the "Allahakbarries".

He died following a stroke of paralysis at St. Petersburg, while on his way home from Russia. He is interred under an unusual grave marker at Woodlawn Cemetery in Bronx, New York.