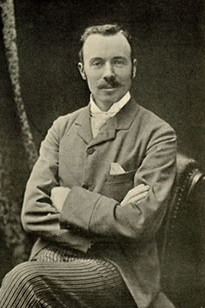 Joseph Thomson (, - , ) was a Scottish and who played an important part in the . is named for him. Excelling as an explorer rather than an exact scientist, he avoided confrontations among his porters or with indigenous peoples. His motto was "He who goes gently, goes safely; he who goes safely, goes far."

Born in , , he was d into his father's stone- and ing business. He developed a keen amateur interest in geology and which eventually led to his formal education at the , studying under and .

On graduating in 1878, he was appointed geologist and naturalist to Alexander Keith Johnston's expedition to establish a route from to and . Johnston perished during the trip and it was left to Thomson to take over the leadership. Thomson successfully led the expedition over 3000 s in 14 months, collecting many specimens and making sundry observations.

In 1883, he embarked on a further Royal Geological Society expedition to explore a route from the eastern coast of Africa to the northern shores of . traders were demanding a route that would avoid the fearsome and the hostile Germans who were competing for trade in the area. The expedition set out a few months behind the rival German expedition of . The expedition was again a success demonstrating the feasibility of the route and making many important biological, geological and ethnographic observations, though Thomson's attempt to climb in a day failed. However, on the return journey, Thomson was gored by a buffalo and subsequently suffered from and .

In 1885 Thomson was employed by the to forestall German influence in the vicinity of the , but returned the following year to the UK to lecture, disillusioned that there were no further opportunities for large-scale exploration in the continent. He was discontented with his life in the UK and struggled to identify new opportunities for exploration. A modest expedition to the of was marred by trouble with porters and local political difficulties. He spent a month in 1889 traveling in central Europe with budding author .

In 1890, employed Thomson to explore north of the and gain treaties and mining concessions from chiefs on behalf of his which had been chartered by the British Government to claim the territory known as Zambezia (later Rhodesia, modern day and ) as far north as the . Though he made a sequence of important treaties on the trip, he was blocked by a epidemic in the intervening country from reaching the ultimate goal, which was to meet at the court of , King of , and to assist Sharpe in incorporating the mineral-rich country by treaty into Zambezia. Thomson's role was to bring supplies of cloth, gunpowder, and other gifts with which to impress Msiri. Without them, Sharpe was rebuffed, and a year later the , believing itself to be in race with another attempt by Thomson to reach Katanga, killed Msiri and took Katanga for King . Unknown to the Stairs Expedition, by this time Thomson had been instructed by the British government not to go. [Moloney, Joseph Augustus (1893). "With Captain Stairs to Katanga". London: Sampson Low, Marston & Company (ISBN 0955393655).]

Thomson's health deteriorated from , , and pyelo-. In 1892, he contracted and, seeking the right climate in which to recuperate, spent time in , , , and . He died in London.