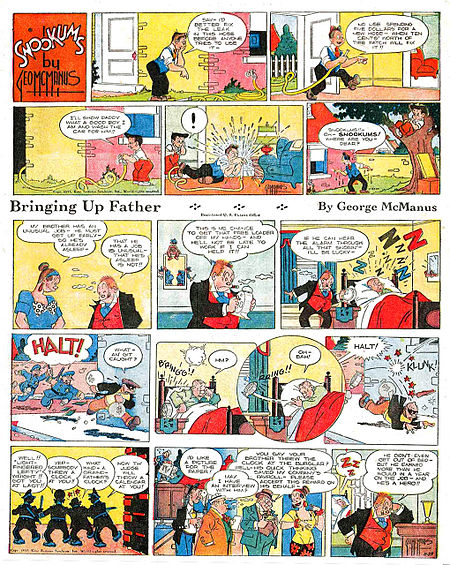 Many readers, however, simply called the strip "Jiggs and Maggie" (or "Maggie and Jiggs"), after its two main characters. According to McManus, he introduced these same characters in other strips as early as November 1911.[1]

The humor centers on an immigrant Irishman named Jiggs, a former hod carrier who came into wealth in the United States by winning a million dollars in a sweepstakes.[2] Now nouveau-riche, he still longs to revert to his former working class habits and lifestyle. His constant attempts to sneak out with his old gang of boisterous, rough-edged pals, eat corned beef and cabbage (known regionally as "Jiggs dinner") and hang out at the local tavern were often thwarted by his formidable, social-climbing (and rolling-pin wielding) harridan of a wife, Maggie, and their lovely young daughter, Nora.

The strip deals with "lace-curtain Irish", with Maggie as the middle-class Irish American desiring assimilation into mainstream society in counterpoint to an older, more raffish "shanty Irish" sensibility represented by Jiggs. Her lofty goal—frustrated in nearly every strip—is to bring father (the lowbrow Jiggs) "up" to upper class standards, hence the title, Bringing Up Father. The occasional malapropisms and left-footed social blunders of these upward mobiles were gleefully lampooned in vaudeville, popular song, and formed the basis for Bringing Up Father.[3] The strip presented multiple perceptions of Irish Catholic ethnics during the early 20th century. Through the character Jiggs, McManus gave voice to their anxieties and aspirations. Varied interpretations of McManus's work often highlight difficult issues of ethnicity and class, such as the conflicts over assimilation and social mobility that second- and third-generation immigrants confronted. McManus took a middle position, which aided ethnic readers in becoming accepted in American society without losing their identity.[4]

Jiggs and Maggie were generally drawn with circles for eyes, a feature more often associated with the later strip, Little Orphan Annie.

McManus, who numbered Aubrey Beardsley among his influences, had a bold, clean-cut cartooning line. His strong sense of composition and Art Nouveau and Art Deco design made the strip a stand-out on the comics page.

McManus was inspired by The Rising Generation, a musical comedy by William Gill that he had seen as a boy in St. Louis, Missouri's Grand Opera House, where his father was manager. In The Rising Generation, Irish-American bricklayer Martin McShayne (played by the fat Irish comedian Billy Barry in the stage production McManus saw) becomes a wealthy contractor, yet his society-minded wife and daughter were ashamed of him and his lowbrow buddies, prompting McShayne to sneak out to join his pals for poker. McManus knew Barry and used him as the basis for his drawings of Jiggs. McManus' wife, the former Florence Bergere, was the model for daughter Nora.

One of McManus' friends, restaurateur James Moore, claimed he was the inspiration for the character Dinty Moore, the owner of Jiggs' favorite tavern. James Moore changed his name to Dinty and founded a real-life restaurant chain. The restaurant owner, however, did not begin the successful line of Dinty Moore canned goods marketed today by Hormel.

A surreal running gag throughout the strip, always removed from the main action of the story, involved hanging wall paintings that "come to life", with subjects often "breaking the fourth wall", escaping the confines of the picture frames, or changing position from panel to panel within the same strip. None of the nominal stars of the strip ever seemed to notice the animated figures, or anything unusual happening on the walls in the background directly behind them.

On January 12, 1913, he debuted Bringing Up Father, about an Irishman named Jiggs, who doesn't understand why his ascension to wealth via the Irish Sweepstakes means he can't hang out with his friends, and his nagging, social-climbing wife, Maggie. The strip was an instant hit, possibly because of its combination of an appealing cast of characters with a unique look of art-nouveau splendor... Before McManus died, in 1954, Bringing Up Father made him two fortunes (the first was lost in the 1929 stock market crash). By that time, Jiggs's Irishness had faded—the new generation saw him as just a rich guy that liked to hang out with a regular crowd.[5]

An uncredited script collaborator on the strip was McManus' brother, Charles W. McManus, who was 61 when he died August 31, 1941. He also had his own comic strips in the 1920s, Dorothy Darnit and Mr. Broad.[6]

In 1913, Rosie's Beau was McManus' Sunday page, and he later revived it as a Sunday topper strip above Bringing Up Father. On April 17, 1938, an absent-minded character in Rosie's Beau realized he was in the wrong place and climbed down into the first panel of Bringing Up Father, arriving in the living room of Maggie and Jiggs.[7]

In 1941, McManus replaced Rosie's Beau with Snookums which ran as the topper above Bringing Up Father until 1956. In the final episode of HBO's The Pacific (2010), Robert Leckie (James Badge Dale) is seen reading Snookums. The Pacific is partially based on Leckie's book, Helmet for My Pillow (1957), but there is no mention of Snookums in Leckie's book.

When McManus died in 1954, the strip continued with other artists, including Bill Kavanaugh and Frank Fletcher. It was expected that McManus' longtime assistant Emil "Zeke" Zekley would take over the strip, but instead King Features replaced McManus with Vernon Greene. With Greene's death in 1965, Hal Campagna stepped in, and Frank Johnson (Boner's Ark) replaced Campagna in 1980. The strip's popularity faded, and Bringing Up Father limped along until its 87-year run came to a close on May 28, 2000.

In 1995, the strip was one of 20 included in the Comic Strip Classics series of commemorative US postage stamps. Bringing Up Father went digital in 2007 when King Features made the strip available as one of the selections in its DailyINK email package.

Bringing Up Father still enjoys popularity in the Scandinavian country Norway; known as Fiinbeck og Fia, the strip has been published weekly in the family journal Hjemmet since 1921; a yearly Christmas book with the strip is published every year since 1930, in the last few decades mostly reprints of material produced by McManus in the 1940s and 1950s. A similar publication was also an annual event (from 1931 to 1977) in Sweden, where the strip is known as Gyllenbom. In Turkey, the strip was published daily by Hürriyet until the late 90s under the name Güngörmüşler (The Worldly-wiseds) with Jiggs renamed to Şaban and Maggie renamed to Tonton (darling).

Maggie and Jiggs in other media

Bringing Up Father at the Seashore opened on Broadway at the Manhattan Opera House in 1921, but closed after 18 performances; a revised version reopened in 1928. Another of Hill's productions of Father opened at the Lyric Theatre in 1925. "Reportedly, this version had Maggie following a fleeing Jiggs from Ireland to a yacht headed for Spain, but the story was halted frequently for various vaudeville acts. The show closed after 24 performances," according to The Holloway Pages' history of the strip.[8]

(The following are silent animated cartoons based on Bringing Up Father, all produced by International Film Service and released through Pathé.)

(All live-action silent comedies, also produced by International Film Service and released through Pathé. Starring comedian Johnny Ray as Jiggs and Laura La Plante as Maggie; directed by Reggie Morris. Confusingly enough, a couple of the titles in this series were duplicated from the earlier cartoons.) This series included:

Sponsored by Lever Brothers, the Bringing Up Father radio series aired on the Blue Network from July 1 to September 30, 1941, starring Mark Smith (1887-1944) as Jiggs and Agnes Moorehead as Maggie. Neil O'Malley also portrayed Jiggs. Their daughter Nora was played by Helen Shields and Joan Banks. Craig McDonnell (1907–1956) was heard in the role of Dinty Moore. The 30-minute program aired Tuesdays at 9pm.[9] 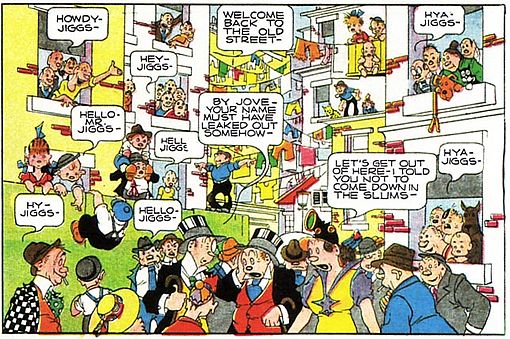 The following feature-length movies were based on the strip:

The last entry produced four sequels, all released by Monogram:

The series was discontinued due to the death of Joe Yule in March 1950. (Yule is the father of Mickey Rooney, who expressed interest in reviving Jiggs onstage in the late 1980s. Both Martha Raye and Cloris Leachman were considered for the part of Maggie, but the project was never produced.) 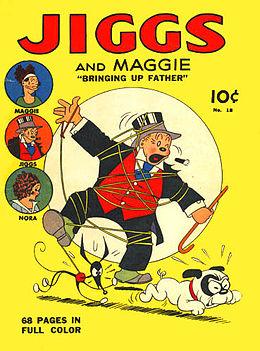