For the freak show performer, see Zip the Pinhead

Zippy is an American comic strip created by Bill Griffith. The character of Zippy the Pinhead initially appeared in underground publications during the 1970s.[1] It is distributed by King Features Syndicate to more than 100 newspapers, and Griffith self-syndicates strips to college newspapers and alternative weeklies.

Zippy made his first appearance in Real Pulp Comix #1 in March 1971. The strip began in The Berkeley Barb in 1976 and was syndicated nationally soon after, originally as a weekly strip. In a 2008 interview with Alex Dueben, Griffith recalled how it all began:

I first saw the 1932 Tod Browning film Freaks in 1963 at a screening at Pratt Institute in Brooklyn, where I was attending art school. I was fascinated by the pinheads in the introductory scene and asked the projectionist (who I knew) if he could slow down the film so I could hear what they were saying better. He did and I loved the poetic, random dialog. Little did I know that Zippy was being planted in my fevered brain. Later, in San Francisco in 1970, I was asked to contribute a few pages to Real Pulp Comics #1, edited by cartoonist Roger Brand. His only guideline was to say "Maybe do some kind of love story, but with really weird people." I never imagined I'd still be putting words into Zippy's fast-moving mouth some 38 years later.[2]

Zippy has a cult following, but some other readers remain confused, prompting the official Zippy website to feature a tutorial on understanding the strip.[3] When William Randolph Hearst III took over the San Francisco Examiner in 1985, he offered Griffith an opportunity to do Zippy as a daily strip. Several months later it was picked up for worldwide daily distribution by King Features Syndicate in 1986. The Sunday Zippy debuted in 1990. When the San Francisco Chronicle canceled Zippy briefly in 2002, the newspaper received thousands of letters of protest, including one from Robert Crumb, who called Zippy "by far the very best daily comic strip that exists in America." The Chronicle quickly restored the strip but dropped it again in 2004, leading to more protests as well as grateful letters from non-fans. The strip continues to be syndicated in many newspapers but often ranks at or near the bottom of reader polls.[4]

The strip is unique among syndicated multi-panel dailies for its characteristics of literary nonsense, including a near-absence of either straightforward gags or continuous narrative, and for its unusually intricate artwork, which is reminiscent of the style of Griffith's 1970s underground comics.

Zippy's original appearance was partly inspired by the microcephalic Schlitzie, from the film Freaks (which was enjoying something of a cult revival at the time) and P. T. Barnum's sideshow performer, Zip the Pinhead (who may not have been a microcephalic, but was nevertheless billed as one).[5] (Coincidentally, Zip the What-Is-Its real name was William Henry Jackson or Johnson (according to various sources); Griffith's full name is William Henry Jackson Griffith, after his great-grandfather, the noted photographer.) However, Zippy is distinctive not so much for his skull shape, or for any identifiable form of brain damage, but for his enthusiasm for philosophical non sequiturs ("All life is a blur of Republicans and meat!"), verbal free association, and the pursuit of popular culture ephemera. His wholehearted devotion to random artifacts satirizes the excesses of consumerism. Zippy's unpredictable behavior sometimes causes severe difficulty for others, but never for himself.

He is married to a nearly identical pinhead named Zerbina, has two children, Fuelrod (a boy) and Meltdown (a girl), both apparently in their early teens, and owns a cat named Dingy. He has four close friends: Claude Funston, a hapless working man; Griffy, a stand-in for Bill Griffith, who often appears in the strip to complain about various aspects of modern life; Shelf-Life, a fast-talking schemer always looking for "the next big thing"; and Vizeen Nurney, a 20-something lounge singer who, despite her rebellious image, has an optimistic and sympathetic nature. A humanoid toad, Mr. Toad (less commonly Mr. the Toad) who embodies blind greed and selfishness, appears occasionally, as do The Toadettes, a group of mindless and interchangeable amphibians, who pop up here and there.

Zippy's angst-ridden twin brother Lippy also frequently appears. He is portrayed as Zippy's total opposite, often dressed in a conservative suit, thinking sequentially and avoiding his brother's penchant for non-sequiturs. In a daily strip dated 8 March 2005, he is depicted as being deeply moved by the poetry of Leonard Cohen, the landscape paintings of Maxfield Parrish and the music of John Tesh.[7] 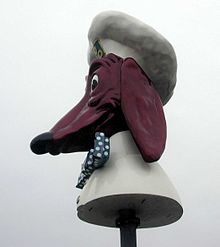 The actual sign for the San Francisco Doggie Diner, commonly portrayed in the comic strip as one of Zippy's conversational foils

In his daily-strip incarnation, Zippy spends much of his time traveling and commenting on interesting places; recent strips focus on his fascination with roadside icons featuring giant beings; Zippy also frequently participates in his long-running conversation with the giant fiberglass doggie mascot of San Francisco's Doggie Diner chain (later, the Carousel diner near the San Francisco Zoo). The website encourages people to send photos of interesting places for Zippy to visit in the strip.

In 2007, Griffith began to focus his daily strip on Zippy's "birthplace", Dingburg. Griffith said, "Over the years, I began to expand Zippy's circle of friends beyond my usual cast of characters to a wider world of people like Zippy--other pinheads. I kept this up for a few months, happily adding more and more muu-muu-clad men and women until one day the whole thing just reached critical mass. The thought then occurred, 'Where do all these friends of Zippy live? Do they live in the real world which Zippy has been seen escaping for years—or do they live apart, in a pinhead world of their own?' Thus Dingburg, 'The City Inhabited Entirely by Pinheads' was born. It even had a motto: 'Going too far is half the pleasure of not getting anywhere'. The logical next step was to imagine Dingburg streets and neighborhoods—to create a place where Zippy's wacky rules would be the norm and everyone would play 24-hour Skeeball and worship at the feet of the giant Muffler Man. Zippy had, at last, found his home town."

His most famous quotation is "Are we having fun yet?", which has become a catchphrase. It appears in Bartlett's Familiar Quotations. At the 2003 University of Florida Conference on Comics and Graphic Novels, Griffith recalled the phone call from Bartlett's:

When Bartlett's approached me in—I forget what year, five or six years ago—I got a call from the editor. And he was going to give me credit for the "Are we having fun yet" saying, but he wanted to know exactly where Zippy had first said it. I did some research (I had no idea), and I eventually found... the strip "Back to Pinhead, the Punks and the Monks" from Yow #2 in 1979... That's the first time he said, "Are we having fun yet?" Certainly not intended by me to be anything more than another non sequitur coming out of Zippy's mind.

Following rumors of a Zippy movie project, Griffith devoted dozens of strips to his real and imagined dealings with Hollywood. An animated television series, to be produced by Film Roman and co-written by Diane Noomin, was in negotiations from 1996 to 2001, but was abandoned due to lack of financing.[citation needed]

On July 9, 2004, Zippy made his stage debut in San Francisco in Fun: The Concept at the Dark Room Theatre. Bill Griffith approved of the adaptation, though he did not work on the project. Fun: The Concept was adapted by Denzil J. Meyers with Jim Fourniadis.[9]

A collection of about 1,000 Zippy quotes was formerly packaged and distributed with the Emacs text editor. Most[citation needed] installations of the "fortune" command, available on most Unix-type systems, also contain this collection. This gives Zippy a very wide audience, since most Emacs users can have a random Zippy quote printed on their screen by typing "M-x yow" and most Linux or BSD users can get a random quote by typing "fortune zippy" in a shell. However, as a result of a decision by Richard Stallman motivated by copyright concerns [2], these quotes have been erased for GNU Emacs 22 [3].

Live action footage of an actor portraying Zippy (Ron Brannan) and singing a song about the character was included in the 1988 documentary Comic Book Confidential.[10] This song ('I'm Zippy') is available for free download on the official website (http://www.zippythepinhead.com/media/I_mZippy.mp3)

In the Seinfeld episode "The Stall" Elaine's boyfriend Tony (played by Dan Cortese) falls during a rock climbing adventure with Kramer and George. In the aftermath of the incident Elaine says Tony might look like a monster; Jerry then says he might look like Zippy the Pinhead.

In 2010, The Theatre Project of Baltimore presented "Zippy the Pinhead: The Musical", co-produced, written and directed by Lorraine Whittlesey of Private Sector Productions. The show ran from November 14 to 21, 2010. Griffith was involved as creative consultant.