The Center for Consumer Freedom (CCF), formerly the Guest Choice Network, is a non-profit American lobby group. It describes itself as "dedicated to protecting consumer choices and promoting common sense,"[2] and defending "the right of adults and parents to choose how they live their lives, what they eat and drink, how they manage their finances, and how they enjoy themselves."[1]

CCF was set up in 1995 by Richard Berman, executive director of the public affairs firm Berman and Company, with $600,000 from the Philip Morris tobacco company. Berman told The Washington Post that CCF is now funded by a coalition of restaurant and food companies as well as some individuals;[2] according to the group's website it is supported by over 100 companies and thousands of individual consumers.[1] Sponsors are reported to include Brinker International, RTM Restaurant Group (the owner of Arby's), Tyson Foods, HMSHost Corp, and Wendy's.[2]

CCF has campaigned against a number of organizations, such as the Centers for Disease Control, the Center for Science in the Public Interest, Mothers Against Drunk Driving, People for the Ethical Treatment of Animals, and Physicians Committee for Responsible Medicine, and maintains several websites devoted to criticizing them.[2] The CCF state that "despite their innocent-sounding names, many of these organizations are financial Goliaths that use junk science, intimidation tactics, and even threats of violence to push their radical agenda".[2] Physicians Committee for Responsible Medicine has responded "If you are in the business of putting veal or beef on the tables of America, and slaughtering more than a million animals per hour, and making an awful lot of money at it, you are going to try to neutralize PETA or other animal-rights groups"[3]

The forerunner to the CCF was the Guest Choice Network, which was organized in 1995 by Berman with money from Philip Morris,[2] "to unite the restaurant and hospitality industries in a campaign to defend their consumers and marketing programs against attacks from anti-smoking, anti-drinking, anti-meat, etc. activists ..." According to Berman, the mission was to encourage operators of "restaurants, hotels, casinos, bowling alleys, taverns, stadiums, and university hospitality educators" to "support [the] mentality of 'smokers rights' by encouraging responsibility to protect 'guest choice.'"[4] In November 2001, the group launched a website, ActivistCash.com, which compiled information gathered from IRS documents and media reports, describing the funding and activities of groups it opposed, and listed key activists and celebrity links. In January 2002 the Guest Choice Network became the Center for Consumer Freedom, a change of name the group said reflected that "the anti-consumer forces [were] expanding their reach beyond restaurants and taverns [and] going into your communities and even your homes."[5]

The CCF's director of research is David Martosko, a former radio talk show producer.[6] Its other directors are Richard Berman, Jacob Dweck, David Browne, and Lane Cardwell.[citation needed] Its senior research analyst is Justin Wilson.[7] The group is a tax-exempt 501(c)(3) nonprofit organization, and as such does not disclose the identity of its funders.[8] IRS records show that in 2007 the CCF paid more than $1.5 million to Berman and Company for research, communications, and other services.[9] 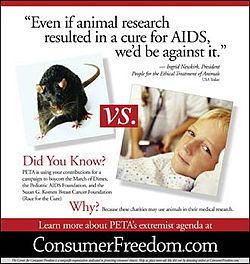 The group defines its mission as fighting against "a growing cabal of food cops, health care enforcers, militant activists, meddling bureaucrats, and violent radicals who think they know what's best for you, [who] are pushing against our basic freedoms."[8]

The CCF has argued against smoking bans and for keeping the legal blood-alcohol level for drivers at 0.10. It questions the dangers of red meat consumption and pesticides.[10][11][12][13]

In a 1999 interview with the Chain Leader, a trade publication for restaurant chains, Berman said his organization attacks activists more aggressively than other lobbyists. "We always have a knife in our teeth," he said. Claiming that activists "drive consumer behavior on meat, alcohol, fat, sugar, tobacco and caffeine," his strategy is "to shoot the messenger... We've got to attack their credibility as spokespersons."[14]

In 2002 CCF spokesman John Doyle described nationwide radio ads put out by the group as efforts to attract people to their website and "draw attention to our enemies: just about every consumer and environmental group, chef, legislator or doctor who raises objections to things like pesticide use, genetic engineering of crops or antibiotic use in beef and poultry."[15]

The CCF had posted a number of videos to YouTube until June, 2010, when its 'consumerfreedom' account was suspended for undisclosed Terms of Service violations.[19] It posted the trailer for the children's movie Charlotte's Web, claiming that the movie "encourages kids to 'say no to bacon' and print out stickers reading 'Tofu Rulez'" and links to groups it states are "extremist," such as the Humane Society of the United States.[20]

The CCF criticizes statistics used by nutrition groups to describe a global "obesity epidemic," and in 2005, it filed a series of Freedom of Information Act requests against the U.S. Centers for Disease Control and Prevention in response to a CDC study claiming that 400,000 Americans die each year as a consequence of being obese.[21] After the CCF campaign CDC reduced its estimates to 112,000 annual deaths, leading the CCF to advertise widely that it had discredited the study.[2]

PETA is a frequent target of CCF advertising and publicity.[22] The Center for Consumer Freedom is publisher of the website PetaKillsAnimals.com,[23] which alleges People for the Ethical Treatment of Animals unnecessarily euthanizes animals in its care.[24]

The CCF runs ActivistCash.com, a website that states it "provides the public and media with in-depth profiles of anti-consumer activist groups, along with information about the sources of what is called their exorbitant funding."[25] The site features generally negative profiles of various groups it believes oppose consumer freedom, such as Greenpeace, PETA and Mothers Against Drunk Driving. It also hosts "biographies" offering negative portrayals of key activists and celebrity supporters for various groups. The site reports what it states are links between profiled groups and extremism, and argues, in general, that the groups profiled hold extreme views that are contrary to the public interest. It states to have examined 500,000 IRS documents in its profiling, listing for each group major donors, income and expenditure, key supporters and connections with other groups.

The CCF operates a number of other websites aside from its own, including PhysicianScam.com, Trans-FatFacts.com, Animalscam.com, Obesitymyths.com, and CSPIScam.com. MercuryFacts.com and FishScam.com contain a mercury calculator that offers an alternative calculation of amount of a fish that can be eaten before getting an unsafe dose of mercury, calculated as ten times the reference dose recommended by the EPA.

The CCF has also claimed (counter to research findings) that dieting and meal tracking do not lead to weight loss,[26] and it has been a critic of United Auto Workers,[27] and the American Federation of Teachers,[28] among others.

Experts on non-profit law questioned the group's non-profit status in an article that appeared in the Chronicle of Philanthropy.[35] Acknowledged corporate donors to the CCF include Coca-Cola, Wendy's, Tyson Foods, Monsanto, and Pilgrim's Pride.[2][36][37] As of 2005, the CCF reported more than 1,000 individual donors[2][8] as well as approximately 100 corporate supporters.[36]

The CCF has drawn harsh criticism for having taken its startup funding from the Philip Morris tobacco company and for lobbying on behalf of the fast food, meat, and tobacco industries while representing consumers.[2][38][39][40][41]

According to The Washington Post, Citizens for Responsibility and Ethics in Washington (CREW), a watchdog group, asked the Internal Revenue Service in 2005 to revoke CCF's tax-exempt status, alleging that Berman and his company had used CCF to direct over $7 million charitable money to himself and his company since 1997, an allegation Berman rejects.[2]

Some groups the CCF has targeted have questioned its ethics and legitimacy. The president of the American Federation of Teachers referred to the CCF's leader as "a shameless lobbyist who has shilled for pesticide, alcohol and tobacco companies." [28] A USA Today journalist said that they should change the name of their website to FatForProfit.com.[42] Michael Pollan writes in his New York Times blog that the CCF is an astroturf organization that works on behalf of large food companies to protect their ability to sell junk food.[43] It has also been criticized for its efforts to portray groups such as the Humane Society of the United States as "violent" and "extreme," and for its opposition to banning the use of trans fats.[44][45][46][47][48] The group Citizens for Responsibility and Ethics in Washington has also campaigned against the CCF's validity as a non-profit tax exempt charitable organization, filing an IRS complaint in 2004 attacking the CCF's states that its advocacy campaigns were "educational" in nature.[2][49][50]

Some corporations, including PepsiCo and Kraft Foods, have declined to work with the CCF, saying they disagree with some of the group's arguments or with its approach to advocacy.[36]

Following a CCF call for a retraction of a New York Times story about mercury levels in sushi as “bad science,” Newsweek senior editor Sharon Begley has criticized the CCF's interpretation of EPA statistics and implications of FDA restrictions on tuna and other fish.[51]