The Moses (c. 1513–1515) is a sculpture by the Italian High Renaissance artist Michelangelo Buonarroti, housed in the church of San Pietro in Vincoli in Rome. Commissioned in 1505 by Pope Julius II for his tomb, it depicts the Biblical figure Moses with horns on his head, based on a description in the Vulgate, the Latin translation of the Bible used at that time.

The marble sculpture depicts Moses with horns on his head. This was the normal medieval Western depiction of Moses, based on the description of Moses' face as "cornuta" ("horned") in the Latin Vulgate translation of Exodus.[2] The Douay-Rheims Bible translates the Vulgate as, "And when Moses came down from the mount Sinai, he held the two tables of the testimony, and he knew not that his face was horned from the conversation of the Lord."[3] This was, however, a mistranslation of the original Greek text, which reads in the Septuagint: "Moses knew not that the appearance of the skin of his face was glorified."[4] The Hebrew Masoretic text also uses words equivalent to "radiant",[5] suggesting an effect like a halo. The church historian Diarmaid MacCulloch comments about this: "Jerome, [the translator of the Old Testament into Latin]], mistaking particles of Hebrew, had turned this into a description of Moses wearing a pair of horns - and so the Lawgiver is frequently depicted in the art of the Western Church, even after humanists had gleefully removed the horns from the text of Exodus."[6]

According to Giorgio Vasari in his Life of Michelangelo, the Jews of Rome came like "flocks of starlings" to admire the statue every Shabat.

The tomb was originally commissioned in 1505 yet was not completed until 1545 in a much reduced scale. Originally intended for St. Peter's Basilica, "Moses" and the tomb were instead placed in the minor church of San Pietro in Vincoli on the Esquiline in Rome after the pope's death. This church was patronised by the della Rovere family from which Julius came, and he had been titular cardinal there.

The tomb of Julius II was a colossal structure that would have given Michelangelo the room he needed for his superhuman, tragic beings. This project became one of the great disappointments of Michelangelo's life when the pope, for unexplained reasons, interrupted the commission, possibly because funds had to be diverted for Bramante's rebuilding of St. Peter's.[7] The original project called for a freestanding, three-level structure with some 40 statues. After the pope's death in 1513, the scale of the project was reduced step-by-step until, in April 1532,[8] a final contract with the heirs of Pope Julius II specified a simple wall tomb with fewer than one-third of the originally planned figures.[9] 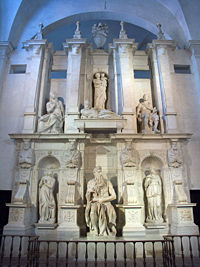 The tomb of Julius II, with Michelangelo's statues of Rachel and Leah on the left and the right of his Moses.

The spirit of the tomb may be summed up in the figure of "Moses", which was completed during one of the sporadic resumptions of the work in 1513.[citation needed]

Michelangelo felt that this was his most life-like creation. Legend has it that upon its completion he struck the right knee commanding, "now speak!" as he felt that life was the only thing left inside the marble. There is a scar on the knee thought to be the mark of Michelangelo's hammer.

The statues of the "Dying Slave" and the "Rebellious Slave" were finished but not included in the monument in its last and reduced design. They are now in the Louvre. Another figure intended for Pope Julius' tomb is the "Genius of Victory", now in the Palazzo Vecchio of Florence.

Other sculptures for the tomb were the "Young Slave", the "Atlas Slave", the "Bearded Slave" and the "Awakening Slave". The sculptures of Rachel and Leah, allegories of the contemplative and the active life, were executed by Raffaello da Montelupo, a pupil of Michelangelo. The other sculptures are by less experienced pupils.

In his essay entitled The Moses of Michelangelo, the Austrian neurologist Sigmund Freud, along with several well-respected experts, associates this work with the first set of Tables described in Exodus 32[11]: (19) “And it came to pass, as soon as he came nigh unto the camp, that he saw the calf, and the dancing: and Moses' anger waxed hot, and he cast the tables out of his hands, and brake them beneath the mount.”

A more recent view, put forward by Malcolm MacMillan and Peter Swales in their essay entitled Observations from the Refuse-Heap: Freud, Michelangelo’s Moses, and Psychoanalysis,[12] relates the sculpture to a second set of Tables and the event mentioned in Exodus 33[13]:

(22) And it shall come to pass, while my glory passeth by, that I will put thee in a clift of the rock, and will cover thee with my hand while I pass by:” and (23) And I will take away mine hand, and thou shalt see my back parts: but my face shall not be seen.

This event is described further in Exodus 34[14]:

(4) And he hewed two tables of stone like unto the first; and Moses rose up early in the morning, and went up unto mount Sinai, as the LORD had commanded him, and took in his hand the two tables of stone. (5) And the LORD descended in the cloud, and stood with him there, and proclaimed the name of the LORD. (6) And the LORD passed by before him, and proclaimed, The LORD, The LORD God, merciful and gracious, longsuffering, and abundant in goodness and truth, (7) Keeping mercy for thousands, forgiving iniquity and transgression and sin, and that will by no means clear the guilty; visiting the iniquity of the fathers upon the children, and upon the children's children, unto the third and to the fourth generation. (8) And Moses made haste, and bowed his head toward the earth, and worshipped.

Even though Sigmund Freud never associates the statue with this latter event his description includes the following: “As our eyes travel down it the figure exhibits three distinct emotional strata. The lines of the face reflect the feelings which have won ascendancy; the middle of the figure shows the traces of suppressed movement; and the foot still retains the attitude of the projected action. It is as though the controlling influence had proceeded downwards from above."[citation needed]