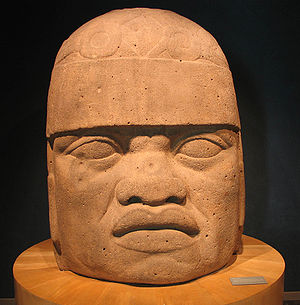 Olmec alternative origin speculations are explanations that have been suggested for the formation of Olmec civilization which contradict generally accepted scholarly consensus. These origin theories typically involve contact with Old World societies. Although these speculations have become somewhat well-known within popular culture, particularly the idea of an African connection to the Olmec, they are not considered credible by the vast majority of Mesoamerican researchers.

The great majority of scholars who specialise in Mesoamerican history, archaeology and linguistics remain unconvinced by alternative origin speculations.[1] Many are more critical and regard the promotion of such unfounded theories as a form of ethnocentric racism at the expense of indigenous Americans.[2] The consensus view maintained across publications in peer-reviewed academic journals that are concerned with Mesoamerican and other pre-Columbian research is that the Olmec and their achievements arose from influences and traditions that were wholly indigenous to the region, or at least the New World, and there is no reliable material evidence to suggest otherwise.[3] They, and their neighbouring cultures with whom they had contact, developed their own characters which were founded entirely on a remarkably interlinked and ancient cultural and agricultural heritage that was locally shared, but arose quite independently of any extra-hemispheric influences.[4]

Some writers claim the Olmec were related to peoples of Africa based primarily on their interpretation of facial features of Olmec statues. They additionally contend that epigraphical, genetic, and osteological evidence supports their claims.[citation needed] The idea that the Olmecs were related to Africans was first suggested by José Melgar, who discovered the first colossal head at Hueyapan (now Tres Zapotes) in 1862 and subsequently published two papers that attributed this head to a "Negro race."[5] The view was espoused in the early 20th century by Leo Wiener and others.[6] Some modern proponents such as Ivan van Sertima and Clyde Ahmad Winters have identified the Olmecs with the Mandé people of West Africa.[6]

Some researchers claim that the Mesoamerican writing systems are related to African scripts. In the early 19th century, Constantine Samuel Rafinesque proposed that the Mayan inscriptions were probably related to the Libyco-Berber writing of Africa.[7] Leo Wiener[8] and others claim that various Olmec and Epi-Olmec symbols are similar to those found in the Vai script, in particular, the symbols on the Tuxtla Statuette, Teo Mask,[citation needed] Cascajal Block,[citation needed] and the celts in Offering 4 at La Venta.

These assertions have found no support among Mesoamerican researchers. While mainstream scholars have made significant progress translating the Maya script, researchers have yet to translate Olmec glyphs.

Genetic and immunological studies over the past two decades have failed to yield evidence of precolumbian African contributions to the indigenous populations of the Americas.[9][10][11] Additionally, the huge mortality associated with the spread of Old World diseases introduced by Europeans suggests long-term immunological isolation which further shows the lack of any contact with African people in the Americas before Columbus.[citation needed]

Some researchers have seen evidence for African skeletons at prehistoric sites in Mexico. Constance Irwin and Andrez Wiercinski have both reported that skeletal remains with African characteristics have been found in Mexico. Irwin, in Fair Gods and Stone Faces, says that there are "distinct signs of Negroid ancestry in many a New World skull."[citation needed] Wiercinski claims that some of the Olmecs were of African origin.[12] He supports this claim with cranial evidence from two Mesoamerican sites: Tlatilco and Cerro de las Mesas. Tlatilco is a site in the Valley of Mexico. Although outside the Olmec heartland, Olmec influences appear in the architectural record. The crania were from the Pre-Classic period, contemporary with the Olmec. Cerro de las Mesa is within the Olmec heartland, although according to Wiercinski, "the series . . . is dated on the Classic period."[13] The Classic period is generally defined to start around AD 250, or 600 years after the end of the Olmec culture.

To determine the racial heritage of the skeletons, Wiercinski used classic diagnostic traits, determined by craniometric and cranioscopic methods, as well as the Polish Comparative-Morphological School skeletal reference collection. These measurements were then compared against three crania sets from Poland, Mongolia and Uganda to represent three racial categories,[14][15][16] which allowed Wiercinski to sort each skull into one or more racial categories.

In his conclusion, Wiercinski presented his findings:[17]

In the last section of his paper, Wiercinski compared the physiognomy of the skeletons to corresponding examples of Olmec sculptures and bas-reliefs on the stelas. For example, Wiercinski states that the colossal Olmec heads represent the "Dongolan" type.[21] The empirical frequencies of the Dongolan type at Tlatilco calculated by Wiercinski was 0.231, more than twice as high as Wiercinski's theoretical figure of 0.101, for the presence of Dongolans at Tlatilco.

Wiercinski summarizes his research by offering the following "ethnogenetical hypotheses":[22]

Wiercinski's research methods and conclusions are not accepted by the vast majority of Mesoamerican scholars, in part because of his reliance on the Polish Comparative-Morphological methodology which limits the placement of skull types within a very narrow spectrum that is often within: Caucasian, Negroid, and Mongoloid. Native Americans are thus made to fit within these groups which often yields false and contradictory assumptions as a result of sample bias.

An interdisciplinary analysis of Native American skulls has shown that there is no real evidence, apart from superficial misjudgments and erroneous conclusions, that Native Americans have any link to an African presence in America before the European encounter.[23] 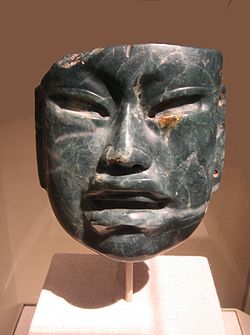 A jade Olmec mask. Gordon Ekholm, who was an eminent archaeologist and curator at the American Museum of Natural History, suggested that the Olmec art style might have originated in Bronze Age China.[24]

Some researchers have argued that the Olmec civilization came into existence with the help of Chinese refugees, particularly at the end of the Shang dynasty.[25] In 1975, Betty Meggers of the Smithsonian Institution argued that the Olmec civilization originated due to Shang Chinese influences around 1200 BC.[26] In a 1996 book, Mike Xu, with the aid of Chen Hanping, claimed that the very same La Venta celts discussed above actually bore Chinese characters.[27][28] These claims are unsupported by mainstream Mesoamerican researchers.[29] The evidence relied on by Mike Xu, including the coincidence of markings on Olmec pottery with those on Chinese oracle bone writings, the significance of jade in both cultures and the shared knowledge of the position of true North, was discussed in an article by Claire Liu in 1997 [30]

See also: Archaeology and the Book of Mormon

In the Book of Mormon, a text regarded as scripture by churches and members of the Latter Day Saint (LDS) movement, the Jaredites are described as a people who left the Old World in ancient times and founded a civilization in the Americas. Mainstream American History and Literature specialists place the literary setting for the Book of Mormon among the “Mound-builders” of North America. The work is therefore classified in the American “Mound-builder” genre of the 19th century.[31] LDS scholars and authors seek to demonstrate that events described in the Book of Mormon have a literal foundation. A popular Book of Mormon geography model places the scene of the Jaredite arrival and subsequent development, in lands around the Isthmus of Tehuantepec in Mesoamerica.[32] The tradition leading to this Central American model, however, does not clearly originate with the Book of Mormon (first published in 1830) but with enthusiastic interest in John Lloyd Stephens’ 1841 bestseller, Incidents of travel in Central America, Chiapas and Yucatan.[33] LDS founder Joseph Smith Jr. placed the arrival of the Jaredites in “the lake country of America” (region of Lake Ontario), allowing for the eventual migration of Book of Mormon peoples to Mexico and Central America.[34]

LDS researcher and anthropology professor John L. Sorenson is among those authors who have put forward the idea that the Olmec civilization resembles, and may be equated to the Jaredites in the Book of Mormon. Sorenson advances this idea particularly in his 1996 book, An Ancient American Setting for the Book of Mormon. Writing in an earlier 1992 article, Sorenson notes some parallels:

Conventional Mesoamerican scholarship does not support any proposal that allows for the presence or influence of Old World cultures in pre-Columbian Mesoamerica. No accepted material evidence has been found that would indicate contact between Mesoamerica and Old World cultures.[38] Among other criticisms leveled against the belief that the Olmec had Jaredite origins or identity, Mesoamerican archaeologists note that many of the things described in the Book of Mormon are known not to have been part of or present in Olmec culture, including iron, silk, and elephants.

Writing in the Mormon studies journal Dialogue, Yale University anthropology professor and eminent Mesoamericanist archaeologist Michael D. Coe lays out the mainstream archaeological assessment of material claims found in the Book of Mormon, as they relate to the known archaeological record of the New World. Specifically addressing the case for any ancient New World presence of the peoples and technologies described in the Book of Mormon, and whether the Olmec and other ancient Mesoamericans resemble these or bear traces of such external influences, Coe states:

There is an inherent improbability in specific items that are mentioned in the Book of Mormon as having been brought to the New World by Jaredites and/or Nephites. Among these are the horse (extinct in the New World since about 7,000 B.C.), the chariot, wheat, barley, and metallurgy (true metallurgy based upon smelting and casting being no earlier in Mesoamerica than about 800 A.D.). The picture of this hemisphere between 2,000 B.C. and A.D. 421 presented in the book has little to do with the early Indian cultures as we know them, in spite of much wishful thinking.[39] 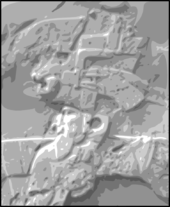 Detail of the carved portrait nicknamed "Uncle Sam" by researchers

According to Michael Coe, explorer and cultural diffusionist Thor Heyerdahl claimed at least some of the Olmec leadership had Nordic ancestry, a view at least partly inspired by the bearded figure, often referred to as "Uncle Sam",[40] carved into La Venta Stela 3, whose apparent aquiline nose has been cited as possible evidence for ancient visitors to the Americas from the Old World:

"The presence of Uncle Sam inspired Thor Heyerdahl, the Norwegian explorer and author of Kon Tiki, among others to claim a Nordic ancestry for at least some of the Olmec leadership... [However], it is extremely misleading to use the testimony of artistic representations to prove ethnic theories. The Olmec were American Indians, not Negroes (as Melgar had thought) or Nordic supermen."[41]