The NBA on ESPN refers to the presentation of National Basketball Association (NBA) games on the ESPN family of networks. The ESPN cable network first televised NBA games from 1983 to 1984, and has been airing games currently since the 2002–03 NBA season. ESPN2 began airing a limited schedule of NBA games in 2002. ESPN on ABC began televising NBA games in 2006 (ABC Sports aired NBA games under the title of the NBA on ABC from 2002 to 2006).

ESPN on ABC is the broadcast home of the NBA. ABC airs games on Christmas Day and under the title of NBA Sunday Showcase, Sunday afternoons from January through the end of the season, continuing to air games throughout the early rounds of the NBA Playoffs, culminating with exclusive coverage of the NBA Finals. 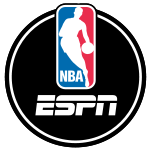 ESPN airs NBA games on Wednesdays, Fridays and Sundays. Most NBA games on the ESPN cable network air on Fridays at 8:00 p.m ET and 7:30 p.m PT as part of "Coast to Coast" doubleheaders. Games on Wednesdays are mostly single games, televised at 9:00 p.m ET (usually following an ACC college basketball game). In addition to games on ABC, several Sundays throughout the season also feature ESPN televised games, usually during the evening.

ESPN's presentation of games is referred to as NBA (name of day) (i.e., NBA Wednesday, NBA Friday and NBA Sunday). Games on holidays or days when ESPN does not usually air games (Tuesdays, Saturdays, etc.) are branded as NBA Special Edition. The telecast also was formerly known as ESPNBA. Only the Wednesday, Friday, Sunday and Special Edition games are not exclusive, in which local sports networks may still air the game in their home market. Likewise the first round playoff coverage is not exclusive.

For the 2006–07 NBA season, ESPN used ABC's theme music from the previous two years, marking the second time that the network took its corporate sibling's NBA theme. Also, NBA games used graphics that had previously been only used on ESPN's coverage of Monday Night Football. Because of the move from ABC Sports to ESPN on ABC, ESPN's graphics, music and complete presentation are used on games televised on ABC. The graphic change to the MNF like graphics was one of the few graphic changes ESPN made for 2006-07. ESPN also changed its general color scheme from red, white, and blue, to black and gold. In the 2008 NBA Playoffs, the banner was slightly edited. There is now a black and gold border around the banner, to better flow with the graphics package. When info and stats slide up from the banner, the gold border is visible as well. Also, the team logos were in smaller, glossy parallelograms in their respective color backgrounds. With a new graphics package debuting on MNF in the 2008-09 season [1], the same graphics were introduced in the April 8, 2009 telecast of the NBA on ESPN. On March 14, 2010, the new "MNF"-like graphics debuted on the NBA on ABC Sunday presentation between the Celtics and Cavaliers. The graphics also debuted on Monday's telecast of NBA on ESPN. Prior to the 2010-11 season, they added the timeout count on the in-game graphics, adopted from ESPN College Football. Beginning with the 2011 NBA Playoffs, an updated composition of ESPN's theme 'Fast Break' was played, along with new in-game presentations. The score banner and other graphics remained the same.

The game between the New York Knicks and the Miami Heat on December 17, 2010, was the first NBA game ever aired on 3D, courtesy of ESPN 3D. The network plans to air 14 NBA regular season games, as well as select playoff games, in 3D.

Greg Gumbel[1] and John Andariese were some of the voices of the original telecasts of The NBA on ESPN, which lasted only two seasons. Tom Mees was among the studio hosts. During a commercial break of a game at Madison Square Garden, the announcers (Greg Gumbel and Chris Berman) danced to the song "Little Darling" that was played on the public address system of the arena. That blooper reel is still often played when ESPN celebrates a milestone.

Other announcers during this period[2][3] included: 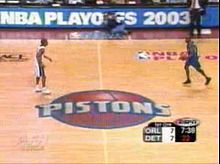 Originally, ESPN (and ABC's) lead broadcast team was Brad Nessler and Bill Walton. Nessler and Walton (eventually joined by Tom Tolbert on ABC) worked NBA Wednesday games most weeks during the 2002-03 season. For NBA Friday, Mike Tirico and Tom Tolbert worked late night West Coast games while John Saunders and Sean Elliott did the early games. For the playoffs, ESPN added Jim Durham to its list of television play-by-play voices and used the ABC main team of Nessler, Walton and Tolbert for its coverage of the 2003 Eastern Conference Finals.

After low ratings on ABC and for the Conference Finals, ESPN reshuffled its announcing group. With the addition of Al Michaels to the ABC NBA line-up, ESPN dissolved the Nessler-Tolbert-Walton team, keeping Nessler as the main announcer but pairing him with Sean Elliott and Dan Majerle. Walton was demoted significantly, working games sporadically (including most of the ESPN NBA Sunday games with either Jim Durham or Brent Musburger). Tolbert stayed with Mike Tirico in a new three-man booth that also included newcomer George Karl.

Also added to the ESPN line-up was Mike Breen, who became the number three announcer behind Tirico and Nessler. Breen worked most of his games with Bill Walton.

For the 2004 Eastern Conference Final, ESPN used Nessler along with ABC's lead analyst Doc Rivers for every game of the series. Game 6 between Detroit and Indiana was the last NBA game Nessler has called to date. 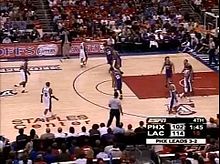 Brad Nessler was dropped from ESPN/ABC's NBA coverage altogether starting with the 2004-05 NBA season. Mike Breen was promoted to lead announcer for ESPN, continuing to work games with Bill Walton (including the Pacers–Pistons brawl). Sean Elliott was dropped, along with Dan Majerle, Doc Rivers (who had become coach of the Boston Celtics) and George Karl (who left during the season to coach the Denver Nuggets). Jim Durham's role increased and ESPN hired former NBC analyst Steve Jones (Durham and Jones would work several regular season games together). ESPN did not use Jones and former cohort Bill Walton in games together during the regular season. Tom Tolbert's role decreased significantly; he was reduced primarily to West Coast games.

In the playoffs, ESPN used the team of Mike Breen and Bill Walton for its coverage of the 2005 Western Conference Final. Al Michaels partnered with newly-added Hubie Brown for the NBA Finals on ABC.

ESPN's announcing teams remained stable in the 2005-06 NBA season. Mike Breen and Bill Walton worked games together during the first half of the season; after Breen was promoted to lead broadcaster for ABC (due to Al Michaels defecting to NBC), Mike Tirico became the number two broadcaster and worked several games with Walton (and later, Steve Jones). During the 2006 NBA Playoffs, Breen worked games with ABC partner Hubie Brown, including the 2006 Eastern Conference Final.

ESPN increased its amount of female analysts, adding current WNBA players Becky Hammon and Kara Lawson as sideline reporters. Swin Cash, of the Detroit Shock, was added as a studio analyst, debuting on NBA Shootaround early in the season. Doris Burke continued as a sideline reporter, while Lisa Salters (who had added Saturday Night Football to her duties) cut down on working NBA Friday games. On January 12, 2007, Kara Lawson was the analyst alongside play-by-play man Mark Jones for ESPN's Washington Wizards-New Orleans/Oklahoma City Hornets game. During this season, ABC's coverage of the NBA was fully integrated in ESPN.

NBA Shootaround is ESPN's main studio program, airing before each NBA Friday telecast. Shootaround and other in-game studio programs originally consisted of Kevin Frazier and Tim Hardaway on Fridays with Stuart Scott replacing Frazier on Wednesdays. After horrible reviews for Hardaway, ESPN brought in Greg Anthony to replace him on Friday nights. Frazier and Anthony became ESPN's main studio team and worked most of the playoffs. For the 2003 Eastern Conference Finals, ESPN used ABC's halftime team of Mike Tirico and Sean Elliott for all the games.

2003-04 was the first year of the longest-tenured ESPN studio team. Frazier and Anthony were joined by controversial writer Stephen A. Smith and NBA legend Bill Laimbeer. Laimbeer, departing to continue coaching in the WNBA, was replaced by Tim Legler during the 2004 NBA Playoffs. Smith, Legler and Anthony were joined by John Saunders (replacing Frazier, who left to host Entertainment Tonight) from late 2004 to the end of the 2005-2006 season.

ESPN's studio team was generally more criticized [6] than praised. After the Pacers–Pistons brawl, ESPN's studio team came under severe criticism, both by the media[7] and by ESPN itself [8] for their stance regarding the actions of Indiana Pacer Ron Artest (who entered the stands to confront a fan, sparking the melee). Saunders came down hard on Detroit fans, referring to them as "punks," while Anthony and Legler defended Artest.

For the 2006-07 NBA season, Saunders was replaced by Fred Hickman, with the remaining team left intact.[9] Previous reports by The Big Lead.com and The New York Post indicated that Anthony, Legler and Smith along with Saunders would be replaced by Dan Patrick, Michael Wilbon and Mark Jackson[10]. Smith's role was significantly reduced, as he would no longer appear in studio with Hickman, Legler and Anthony, instead appearing during "The A List", a segment during the pregame show.

The program was also moved from ABC-owned studios at Times Square in New York City to ESPN's headquarters in Bristol, Connecticut.

Modified ESPN's bottomline scoreboard for the 2010-11 season, with the addition of the timeout count.
For more details on ESPN's NBA ratings, see National_Basketball_Association_Nielsen_ratings#ESPN.

ESPN's highest rated NBA game was Game 5 of the 2006 Eastern Conference Finals between the Miami Heat and Detroit Pistons. The game scored a 5.5 cable Nielsen rating, with nearly five million viewers. To put that in context, Monday Night Football on ESPN posted ratings of 9+ in two of its first three telecasts. ESPN's highest rated regular season contest was the first matchup between Shaquille O'Neal and Yao Ming. The game between the Los Angeles Lakers and Houston Rockets scored a 3.82 cable Nielsen rating.

ESPN2 aired a handful of NBA regular season games from 2002 to 2006, typically in January, when prime time golf tournaments preempted coverage on ESPN. On several occasions, ESPN2 would air the first game of a doubleheader, while ESPN air the second game. Starting with the 2006-2007 season, regular season games on ESPN2 were discontinued. During the playoffs, ESPN2 airs games that otherwise would not have appeared on any outlet other than NBA TV, mostly on Friday nights and only during the first round.

Despite airing fewer than forty NBA games in its eleven years of existence, ESPN2 did televise NBA legend Michael Jordan's final game in Chicago in January of 2003.

ESPN2 is the primary outlet for ESPN WNBA coverage, televising regular season games, the WNBA Finals and the WNBA Draft. WNBA Shootaround, the WNBA equivalent of the ESPN NBA pregame show, airs sporadically on the network, typically before presentations of WNBA Tuesday.