Dan Abnett (born 12 October 1965) is a British comic book writer and novelist. He is a frequent collaborator with fellow writer Andy Lanning, and is known for his work on books for both Marvel Comics, and their UK imprint, Marvel UK, since the 1990s, including 2000 AD. He has also contributed to DC Comics titles, and his Warhammer Fantasy and Warhammer 40,000 novels and graphic novels for Games Workshop's Black Library now run to several dozen titles and have sold over 1,150,000 copies as of May 2008.[1] In 2009 he released his first original fiction novels through Angry Robot books.[2]

As one of the more prolific 2000 AD writers, Abnett was responsible for the creation of one of the comic's better known, and longest-running, strips of the last decade, Sinister Dexter. Other original stories include Black Light, Badlands, Atavar, Downlode Tales, Sancho Panzer, Roadkill and Wardog, based on the game of the same name. Abnett has also contributed to some of the comic's major ongoing series, including Judge Dredd, Durham Red and Rogue Trooper.

His work for Marvel includes runs on Death's Head 2, Battletide, Knights of Pendragon (all of which he co-created), The Punisher, War Machine, Annihilation: Nova and various X-Men titles.

At DC he is probably best-known for his 2000 relaunch of Legion of Super-Heroes as the limited series Legion Lost and then the ongoing series The Legion.[4][5][6][7][8] His work for DC is usually co-written with Andy Lanning and they are often referred to as DnA.

For Dark Horse Comics he co-wrote Planet of the Apes: Blood Lines with Ian Edginton, as well a penning Lords of Misrule and HyperSonic.

Having written two Doctor Who audio dramas – The Harvest and Nocturne – for Big Finish's series, as well as Torchwood: Everyone Says Hello for BBC Audio, Dan was also the author of two novels based on the BBC's revived science-fiction series: The Story of Martha and Torchwood: Border Princes.

In 1994, he wrote a promotional comic to promote the opening of the Nemesis roller coaster at Alton Towers.[9] 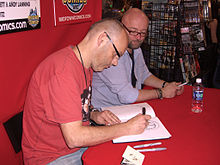 At 2000 AD he finished the final book of The V.C.s and started Black Atlantic in the Judge Dredd Megazine, which was drawn by Steve Roberts (seen working on Bec & Kawl) in black and white.

In 2008 Abnett and Lanning took over The Authority as part of the World's End relaunch of the core Wildstorm titles.[10]

In addition, Abnett has done a lot of work on Marvel's "cosmic" characters. They expanded on their work in Annihilation: Nova[11] and Nova,[12][13] and piloted the next big event Annihilation: Conquest. They said "we were approached by Andy Schmidt, who edited the first 'Annihilation' event, and asked to pilot the next event, which Bill Rosemann is editing." They ended up writing the Prologue, the Nova series crossover and the main Annihilation: Conquest limited series.[14] The characters then became the core of a new Guardians of the Galaxy.[15]

In June 2008, that Abnett and Lanning had signed an exclusive deal with Marvel, which they hope will give them time to work on the "cosmic" characters they have been dealing with, as well as more earth-based ones. The contract allows them to finish existing commitments, so they will be able to finish their fifteen issue run on The Authority.[16] In addition Marvel has allowed the contract to include "a couple of exceptions that are not direct competition, for example, Dan's 2000AD work in the UK and his Games Workshop novels."[17] The first major work to emerge after this deal will be War of Kings, a crossover storyline, emerging from Secret Invasion, that pitches Black Bolt (and the Inhumans) against Gabriel Summers (and the Shi’ar Empire) but also draws in other teams and characters, including Nova, the Guardians of the Galaxy and the Starjammers.[18][19] This then led straight into "Realm of Kings" which deals with how the different groups deal with the fallout from the events in War of Kings[20][21][22] and this, in turn, was followed by The Thanos Imperative.[23][24][25][26][27] DnA have also written an Iron Man/Thor limited series.[28]

He and Lanning have also written Fusion, a crossover series between Marvel and Top Cow.[29]

He has also started Insurrection, a series in Judge Dredd Megazine that aims "to bring to the Dredd Universe something of the epic war-in-space scale of the stuff I write for Warhammer 40K."[30]

Abnett wrote the screenplay for Games Workshop and Codex Pictures's CGI film Ultramarines[31] which was originally due for release on 29 November 2010.[32] The actual release date of the movie was 13 December 2010.

Dan Abnett has been writing comics and novels since the mid-1980s, producing hundreds of comic stories and dozens of novels.