Charles Reed Bishop (1822–1915) was a businessman and philanthropist in Hawaii. Born in Glens Falls, New York, he sailed to Hawaii in 1846 at the age of 24, and made his home there. Bishop was one of the first trustees of and a major donor to the Kamehameha Schools in Hawaii. He also founded the Bernice Pauahi Bishop Museum, and founded Hawaii's first successful bank, which is now known as First Hawaiian Bank.

On January 25, 1822, Charles Reed Bishop was born to Maria Reed Bishop and Samuel Bishop. His father was a toll collector who worked on a toll booth in the middle of the Hudson River near Glens Falls, New York. Charles' mother died two weeks after giving birth to her next son, Henry. His father died when he was four, and Charles went to live with his grandfather on his 125-acre (0.51 km2) farm in Warrensburg. He worked on his grandfather's farm, learning how to care for sheep, cattle, and horses. While at his grandfather's house, he was baptized in a Methodist church.[citation needed]

Bishop spent his early years of education at a village school, and his 7th and 8th grade years completed his formal schooling. Bishop was then able to get a job as a clerk, and was soon hired by Nelson J. Warren, who headed the largest mercantile company in Warrensburg. 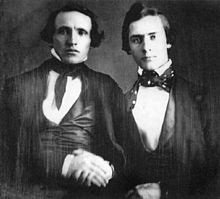 Bishop sailed on the Henry, leaving February 23, 1846 with his friend Lee. By October the ship had rounded Cape Horn and needed to stop in Honolulu for provisions. Lee was convinced to become the second western-trained lawyer in the Hawaiian islands and first Chief Justice of the Supreme Court. Reed decided to stay with him, and was hired to sort out the failed land deal of Ladd & Co. which was the first major formal law proceeding. He then worked for the U.S. Consul.[1] On February 27, 1849 he became a citizen of the Kingdom of Hawaii. He became an investor with Henry A. Peirce and Lee in a sugar plantation on the island of Kauaʻi, near where the Ladd company had been somewhat successful. From 1849 to 1853 he was Collector General of Customs.[2]:73

On May 4, 1850 he married Bernice Pauahi Pākī, descendant of the royal House of Kamehameha, despite the objections of her parents.[3] A private ceremony in the Royal School was not attended by her family, but within a year her father Pākī made peace and the couple lived in the family esate called Haleakala. Bishop formed a partnership with William A. Aldrich selling merchandise to be shipped to the California Gold Rush. He became known as a trusted place for traders to deposit and exchange the various currencies in use at the time.[1] In 1853 he was elected as representative to the legislature of the Hawaiian Kingdom.[4] 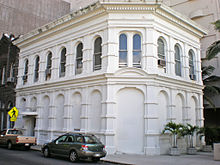 On August 17, 1858 Aldrich split off the shipping business, and Bishop founded Bishop & Co. as the first chartered bank in the Kingdom and the second oldest bank west of the Rocky Mountains. On its first day it took in $4784.25 in deposits. In 1878 it outgrew its basement room and expanded to a two story building, which still stands as a contributing property to the Merchant Street Historic District.[5][6] In 1895 he sold the bank to Samuel Mills Damon (1841–1924), son of missionary Samuel C. Damon (1815–1885). Over time the bank grew and became First Hawaiian Bank in 1960.[7]

Bishop was one of the first trustees of and major donor to the Kamehameha Schools, and founder of the Bernice Pauahi Bishop Museum.[8] Bishop hired William Tufts Brigham, (whom he had met on a scientific visit in 1864 with Horace Mann Jr.) to be the museum's first director.[1] He also donated funds for buildings at Punahou School. Bishop was also president of the Honolulu Chamber of Commerce 1883–1885 and 1888–1894.

After the overthrow of the Kingdom of Hawaii, Bishop left Hawaii and moved to San Francisco, California in 1894. He became vice-president of the Bank of California until he died June 7, 1915. He stayed involved in Hawaiian estate affairs from California. For example, he hired architects Clinton Briggs Ripley and Charles William Dickey to design a new building for the Bishop estate headquarters and Pauahi Hall on the Punahou School campus.[9]

Bishop died in 1915 at the age of 93. His ashes were shipped back and buried next to his wife at the Royal Mausoleum of Hawaii.[10]