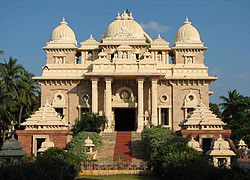 Ramakrishna Math (Bengali: রামকৃষ্ণ মঠ) and Ramakrishna Mission (Bengali: রামকৃষ্ণ মিশন) are twin organizations which form the core of a worldwide spiritual movement known as Ramakrishna Movement or Vedanta Movement.[1] The Ramakrishna Mission is a philanthropic, volunteer organization founded by Ramakrishna's chief disciple Swami Vivekananda on May 1, 1897. The Mission conducts extensive work in health care, disaster relief, rural management, tribal welfare, elementary and higher education and culture. It uses the combined efforts of hundreds of ordered monks and thousands of householder disciples. The Mission bases its work on the principles of karma yoga.[2] As a practical extension of these principles, Swami Atmaprabhananda initated a global brotherly love project in Ramakrishna Mission Vidyapith at Deoghar where he was the principal of the school. [3]

The Mission, which is headquartered at Belur Math in Howrah, WB near Kolkata, India, subscribes to the ancient Hindu philosophy of Vedanta. It is affiliated with the monastic organization Ramakrishna Math, with whom it shares members.[1]

The Ramakrishna Mission, founded by Swami Vivekananda in 1897, is an humanitarian organization which carries out extensive medical, relief and educational programs. Both the organizations have headquarters at the Belur Math. The Ramakrishna Mission acquired a legal status when it was registered in 1909 under Act XXI of 1860. Its management is vested in a Governing Body. Though the Mission with its branches is a distinct legal entity, it is closely related to the Ramakrishna Math. The elected trustees of the Math also serve as Mission's Governing Body. [4] Vedanta Societies comprise the American arm of the Ramakrishna movement and work more in purely spiritual field rather than social welfare.[4]

The Ramakrishna Math is administered by an democratically elected Board of Trustees. From amongst themselves the Trustees elect President, Vice-Presidents,General Secretary, Assistant Secretaries and Treasurer.

All the monks of the Ramakrishna Order form the democratic base of the administration. A representative meeting of all monks is held every three years when the report of all the activities of the Organization are approved and the accounts passed and guidance sought for further development.

This conference places its seal of approval on the decisions taken by the Trustees elected by them and gives policy guidance. 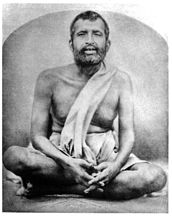 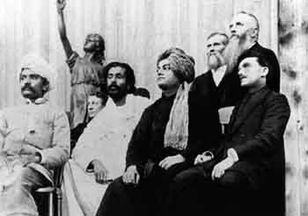 Swami Vivekananda at the Parliament of Religions

Ramakrishna Paramahamsa ( 1836–1886 ), a 19th century saint was the founder of the Ramakrishna Order of monks[5] and is regarded as the spiritual founder of the Ramakrishna Movement.[6][7] Ramakrishna was a priest in the Dakshineswar Kali Temple and attracted several monastic and householder disciples. Narendranath Dutta, who later became Swami Vivekananda was one of the chief monastic disciples. Shortly before his death in 1886, Ramakrishna gave the ocher cloths to his young disciples, who were planning to become renunciates. Ramakrishna entrusted the care of these young boys to Vivekananda. After Ramakrishna's death, the young disciples of Ramakrishna gathered and practised spiritual disciplines. They took informal monastic vows on a night which to their pleasant surprise turned out to be the Christmas Eve in 1886.[5]

After the death of Ramakrishna in 1886, the monastic disciples formed the first Math (monastery) at Baranagore. Later Swami Vivekananda became a wandering monk and in 1893 he was a delegate at the 1893 Parliament of the World's Religions. His speech there, beginning with "Sisters and brothers of America" became famous and brought him widespread recognition. Vivekananda went on lecture tours and held private discourses on Hinduism and spirituality. He also founded the first Vedanta Society in America at New York. He returned to India in 1897 and founded the Ramakrishna Mission on May 1, 1897.[5] Though he was a Hindu monk and was hailed as the first Hindu missionary in modern times, he exhorted his followers to be be true to their faith but respect all religions of the world as his Guru Sri Ramakrishna had taught that all religions are pathways to God. One such example is his exhortion "to become like Jesus Christ"[8] and that one can be born in a church but he or she should not die in a church meaning that one should realize the spiritual truths for themselves and not stop at blindly believing in doctrines taught to them. The same year, famine relief was started at Sargachi by Swami Akhandananda, a direct disciple of Ramakrishna. Swami Brahmananda, a direct disciple of Ramakrishna was appointed as the first president of the Order. After the death of Swami Vivekananda in 1902, Sarada Devi, the spiritual counterpart of Ramakrishna, played an important role as the advisory head of a nascent monastic organization. Gayatri Spivak writes that Sarada Devi "performed her role with tact and wisdom, always remaining in the background."[9]

The motto and principles

The aims and ideals of the Mission are purely spiritual and humanitarian and has no connection with politics.[10] Vivekananda proclaimed "Renunciation and service" as the twofold national ideals of modern India and the work of Ramakrishna mission strives to practice and preach these ideals.[11] The service activities are based on the message of "Jiva is Shiva" from Ramakrishna and Swami Vivekananda's message of "Daridra Narayana" to indicate that service to poor is service to god. The Principles of Upaishads and Yoga in Bhagavad Gita reinterpreted in the light of Ramakrishna's Life and Teachings is the main source of inspiration for the Ramakrishna Mission.[12] The service activities are rendered looking upon all as veritable manifestation of the Divine. The Motto of the organization is Atmano Mokshartham Jagad-hitaya Cha. Translated from Sanskrit आत्मनॊ मोक्षार्थम् जगद्धिताय च it means For one's own salvation, and for the good of the world.[13] .

After the passing away of their Master Sri Ramakrishna in 1886 the young disciples organized themselves into a new monastic order. The original monastery at Baranagar known as Baranagar Math was subsequently moved to Alambazar area nearby in 1892, then to Nilambar Mukherjee's Garden House, south of the present Belur Math in 1898 before finally being shifted in January 1899 to a newly acquired plot of land at Belur in Howrah district by Swami Vivekananda.[14] This monastery, known as Belur Math, serves as the Mother House for all the monks of Ramakrishna Order who live in the various branch centres of Ramakrishna Math and/or Ramakrishna Mission in different parts of India and the world.

All members of the Order undergo training and ordination (Sannyasa) at Belur Math.

Designed and explained by Swami Vivekananda in his own words:[15]

The wavy waters in the picture are symbolic of Karma; the lotus, of Bhakti; and the rising-sun, of Jnana. The encircling serpent is indicative of Yoga and the awakened Kundalini Shakti, while the swan in the picture stands for Paramatman (Supreme Self). Therefore, the idea of the picture is that by the union of Karma, Jnana, Bhakti and Yoga, the vision of Paramatman is obtained.

A sailor assigned to the mine countermeasures ship USS Patriot (MCM 7) who cleared ground to plant a garden of pomegranate, guava and lemon trees at the mission.

The principal workers of the mission are the monks. The mission's activities cover the following areas,[11]

The mission has its own hospitals, charitable dispensaries, maternity clinics, tuberculosis clinics, and mobile dispensaries. It also maintains training centers for nurses. Orphanages and homes for the elderly are included in the mission's field of activities, along with rural and tribal welfare work.[3]

The mission has established many renowned educational institutions in India, having its own university, colleges, vocational training centers, high schools and primary schools, teacher's training institutes, as well as schools for the visually handicapped.[3] It has also been involved in disaster relief operations during famine, epidemic, fire, flood, earthquake, cyclone and communal disturbances.[3]

The mission played an important role in the installation of photovoltaic (PV) lighting systems in the Sunderbans region of West Bengal. Due to the geographical features of the Sunderbans, it is very difficult to extend the grid network to supply power to its population. The PV lighting was used to provide electricity to the people who were traditionally depending on kerosene and diesel.[16]

The mission is a non-sectarian organization[17][18] and ignores caste distinctions.[19]

Ramakrishna ashrama's religious activities include satsang and arati. Satsang includes communal prayers, songs, rituals, discourses, reading and meditation. Arati involves the ceremonial waving of lights before the images of a deity of holy person and is performed twice in a day.[20] Ramakrishna ashramas observes major Hindu festivals, including Maha Shivarathri, Rama Navami, Krishna Asthami and Navarathri. They also give special place to the birthdays of Ramakrishna, Sarada Devi, Swami Vivekananda and other monastic disciples of Ramakrishna.[20] The January 1 is celebrated as Kalpataru day.[21]

The math and the mission are known for their religious tolerance and respect for other religions. Among the earliest rules laid down by Swami Vivekananda for them was, "Due respect and reverence should be paid to all religions, all preachers, and to the deities worshiped in all religions."[22] Acceptance and toleration of all religions is the one of ideals of Ramakrishna Math and Mission. Along with the major Hindu festivals, Muhammad's birthday, Christmas Eve and Buddha's Birthday are also devoutly observed.[20][22][23] Cyril Veliath of Sophia University writes that the Ramakrishna Mission monks are a relatively orthodox set of monks who are "extremely well respected both in India and abroad", and that they "cannot be classified as just another sect or cult, such as the groups led by the gurus". Veliath writes that "of the Hindu groups I have worked with I have found the Ramakrishna Mission to be the most tolerant and amenable to dialogue, and I believe that we Christians couldn’t do better, than to cooperate wholeheartedly in their efforts towards inter-religious harmony.[8] Bob Robinson writes, "Unlike more militant Hindu organizations, the mission has consistently advocated and itself displayed a tolerant, friendly attitude towards minority religious traditions and a sympathetic acquaintance with at least parts of the scriptures of those faiths."[24]

In a speech made in 1993, Federico Mayor, Director-General of UNESCO, stated:[33]

I am indeed struck by the similarity of the constitution of the Ramakrishna Mission which Vivekananda established as early as 1897 with that of UNESCO drawn up in 1945. Both place the human being at the center of their efforts aimed at development. Both place tolerance at the top of the agenda for building peace and democracy. Both recognize the variety of human cultures and societies as an essential aspect of the common heritage.

In 1980, in an act that caused "considerable debate" within the order, the mission petitioned the courts to have their organization and movement declared a non-Hindu minority religion.[34] Many generations of monks and others have been of the view that the religion propounded and practiced by Ramakrishna and his disciples is very much different from that practiced by Hindu masses then. They held that the Ramakrishna's "Neo-Vedanta" is a truer version of the ideals of Vedanta. So it was honestly felt that this makes the followers of Ramakrishna eligible for the legal status of "minority". It is possible that the immediate cause for the appeal for minority status was because there was a danger that the local Marxist government would take control of its educational institutions unless it could invoke the extra protection the Indian constitution accords to minority religions. While the Calcutta High Court accepted the mission's pleas, The Supreme Court of India ruled against the mission in 1995.[35] The mission found it advisable to let the matter rest. Today it remains as a Hindu organization.[36]

The following is the list of Presidents (spiritual heads) of the Monastic Order.

Apart from Direct disciples of Sri Ramakrishna, some of the other notable monks of the order are