The Divine Life Society is a religious organization and an ashram, founded by Swami Sivananda Saraswati in 1936, at Muni Ki Reti, Rishikesh, India. Today it has branches spread across many parts of the world as well as India, also several of Swami Sivananda's disciples went on to open several independent organizations in Mauritius, US, Australia, Canada, Malaysia, South Africa, South America, and Europe [1][2][3] 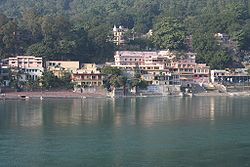 Sivananda Kutir at Sivananda Ghat, and Sivananda Ashram above, Rishikesh

Its aim is to disseminate spiritual knowledge in the following ways:

In 1936, after returning from a pilgrimage, Swami Sivananda took residence in an old kutir on the banks of the Ganges in Rishikesh. Other disciples seeking to live in his company also took up residence in the surrounding area, often in less than ideal conditions. In order to better serve the growing tide of disciples, he founded The Divine Life Society Trust. A grant of land from the ruler of Tehri-Garhwal eventually helped to provide space for new buildings and the continuing growth of the new ashram.[4] Swami Chidananda Saraswati served as president of the society from August 1963 to 28 August 2008, while Swami Krishnananda as the General-Secretary of the Society in Rishikesh, from 1958 until 2001. 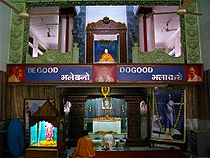 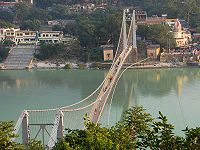 Ram Jhula Bridge across the Ganges at Muni Ki Reti, built in 1980s, close to the Kutir of Swami Sivananda