The Crested Serpent Eagle (Spilornis cheela) is a medium-sized bird of prey that is found in forested habitats across tropical Asia. Within its widespread range, there are considerable variations and some authorities prefer to treat several of its subspecies as completely separate species.[2] In the past, several species including the Philippine Serpent Eagle (S. holospila), Andaman Serpent Eagle (S. elgini) and South Nicobar Serpent Eagle (S. klossi) were treated as subspecies of the Crested Serpent Eagle. All members within the species complex have a large looking head with long feathers on the back of the head giving them a maned and crested appearance. The face is bare and yellow joining up with the ceres while the powerful feet are unfeathered and heavily scaled. They fly over the forest canopy on broad wings and tail have wide white and black bars. They call often with a loud, piercing and familiar three or two-note call. They often feed on snakes, giving them their name and are placed along with the Circaetus snake-eagles in the subfamily Circaetinae. 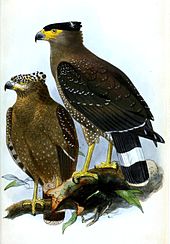 Subspecies S. c. pallidus from the lowlands of northern Borneo

This medium-large, dark brown eagle is stocky, with rounded wings and a short tail. Its short black and white fan-shaped nuchal crest gives it a thick-necked appearance. The bare facial skin and feet are yellow. The underside is spotted with white and yellowish-brown. When perched the wing tips do not reach until the tail tip. In soaring flight, the broad and paddle-shaped wings are held in a shallow V. The tail and underside of the flight feathers are black with broad white bars. Young birds show a lot of white on the head.[3][4] The tarsus is unfeathered and covered by hexagonal scales. The upper mandible does not have an overhanging festoon to the tip.[5]

Within its widespread range across tropical Asia, 21 populations have been named as subspecies.[2] The most widespread subspecies are the nominate from along the sub-Himalayan range in India and Nepal, melanotis in Peninsular India, spilogaster of Sri Lanka, burmanicus in most of Indochina, ricketti in northern Vietnam and southern China, malayensis of the Thai-Malay Peninsula and northern Sumatra, pallidus from northern Borneo, richmondi from southern Borneo, bido from Java and Bali, batu from southern Sumatra and Batu, hoya from Taiwan, rutherfordi from Hainan, and palawanensis from Palawan. The remaining subspecies are all restricted to smaller islands: davisoni in the Andamans, minimus (Central Nicobar Serpent Eagle) from the central Nicobars, perplexus (Ryukyu Serpent Eagle) from Ryukyu, natunensis (Natuna Serpent Eagle) from Natuna, abbotti (Simeulie Serpent Eagle) from Simeulue, sipora (Mentawai Serpent Eagle) from Mentawai, asturinus (Nias Serpent Eagle) from Nias, and baweanus (Bawean Serpent Eagle) of the Bawean. The last seven (with English names in brackets) are sometimes treated as separate species.[2] Although the Crested Serpent Eagle remains widespread and fairly common overall, some of the taxa that are restricted to small islands are believed to have relatively small populations that likely are in the hundreds.[2] The rarest is probably the Bawean Serpent Eagle with a declining population of about 26–37 pairs, which makes it critically endangered.[6][7][8][9]

The nominate subspecies has a black throat while the peninsular Indian form has a brownish throat. There are clinal latitudinal variations, with size decreasing southward.[3] The small islands taxa are generally smaller in size than the taxa from the Asian mainland/larger islands in a phenomenon termed as insular dwarfism.[2] [10]

The specific name cheela is derived from the Hindi name for kites.

Call of ssp. melanotis recorded in the Dhoni hills near Palghat 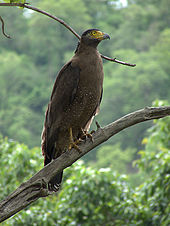 The Crested Serpent Eagle, as its English name suggests, is a specialist reptile eater which hunts over forests, often close to wet grassland,[11] for snakes and lizards. It is placed along with the snake eagles of the genus Circaetus in the subfamily Circaetinae.[12] It is found mainly over areas with thick vegetation both on the low hills and the plains. This species is a resident species, but in some parts of their range they are found only in summer.[3][13]

The call is a distinctive Kluee-wip-wip with the first note being high and rising. They call a lot in the late mornings from their perches where they spend a lot of time and they rise on thermals in the mornings.[3] When alarmed, they erect the crest and the head appears large and framed by the ruff.[5] They will sometimes follow snakes on the ground.[14] They roost in the interiors of trees with dense foliage.[15] A radio-telemetric study of the species in Taiwan found that the birds spend 98% of the day perched and usually finding food in the morning hours. They appear to use a sit and wait foraging strategy.[16]

The breeding season is mainly in winter to spring. The nest is a large platform built high on a tree. Both birds in a pair build the nest but the female alone incubates. In central India, the Terminalia tomentosa is often used. The nests are lined with green leaves from the tree on which it is placed.[14] The usual clutch is one egg but two are sometimes laid and only a single chick is successfully raised in a season. Nests are defended by the parents.[17][18][19][5]

Several species of endoparasitic nematodes have been recovered from the intestines of Crested Serpent Eagles including Madelinema angelae[20][21] Avian pox virus infections which cause warts on the face have been observed in a wild bird living in Taiwan.[22] A number of ectoparasitic bird lice have been described from the species including Kurodaia cheelae.[23]