Centenary College of Louisiana at Jackson

Centenary College of Louisiana at Jackson

The original campus of Centenary College of Louisiana is located in Jackson, Louisiana. It is operated and preserved as a museum by the Louisiana Office of State Parks as the Centenary State Historic Site, offering educational interpretive programs and guided tours.

In 1825, the Louisiana Legislature chartered four public colleges. One of these was the College of Louisiana at Jackson, a small town on the border of East and West Feliciana Parishes. Despite the tireless efforts of the trustees to maintain a college of the finest repute, in its 20-year history, the college only produced 24 graduates. Its main contributions to the future of the campus were the East and West Wing dormitories, two impressive brick barracks-style structures built between 1832-1837.

Several institutions of higher learning sprouted in and around Jackson in the autumn of 1845, somewhat as a result of Centenary's opening at that time. The Episcopal women's academy The Southern Institute for Young Ladies opened the year before under the direction of Rev. William B. Lacey—who had been a president of the College of Louisiana. The school continued in operation until 1860. The Feliciana Female Collegiate Institute opened in 1847 led by the Methodist Episcopal Rev. Benjamin Jones and his wife. It also continued until the outbreak of the American Civil War.

The greatest event of the social calendar in antebellum Jackson was Centenary's annual commencement. The small town was pushed to its limits at that time, as dignitaries from across the state and region crowded its hotels and private homes for the occasion. More people than usual were in attendance for the 1856 commencement, as it included the ceremony of placing the cornerstone for the college's new Centre Building (pictured). Included in this building were all offices, classrooms, laboratories, debate halls, etc. The building also featured a 3,000-volume library, and an auditorium which sat between two and three thousand. When completed, the structure dwarfed the dormitories upon either side (also pictured).

The completion of the Centre Building marked the high water mark of Centenary's tenure in Jackson. However, it was fated to be short-lived. Less than three years after the building was completed, the college closed, the vast majority of its students having joined the Confederate Army. The last entry in the minutes of the Board of Trustees in 1861 reads "Students have all gone to War--College suspended, and God Help the Right!"

Although no longer a college, Centenary's campus was not altogether abandoned. The preparatory department continued for some time, and upon its closing the campus was transformed into a Confederate hospital. More than 500 Confederate soldiers—mostly from Port Hudson--were treated at the Centenary hospital. Some eighty of those sent to Centenary died there, and are buried in a Cemetery on the grounds.

After the fall of Port Hudson, Centenary was taken over by the Union Army, and used as a field hospital, supply depot, and recruiting post—primarily for the United States Colored Troops. A large body of Confederate cavalry were sent to disrupt the recruiting practices and resulted in the largest battle to occur within the town limits of Jackson. The Confederates suffered minimal casualties, routed Union forces and captured ammunition and other supplies. Union Forces suffered nearly one-third of the garrison detachment killed or wounded.

Centenary College of Louisiana reopened in 1866...in a completely different world than the one that had forced their closing five years earlier. Whereas in 1861, there had been secession fever, and cotton was king, there was now nothing. The people that had been among the wealthiest in the country were reduced to selling wool and eggs. Those who had previously sent their sons to Centenary either could no longer afford to, or no longer had sons to send. Also, Millsaps College had opened, taking away a significant portion of their enrollment—and more importantly, endowment—base.

Faced with these dire financial straits, the president of the college would often be away for months at a time. He would go door-to-door, practically begging for financial support, or simply visit as many Methodist congregations as he could reach, passing the hat—to little or no avail.

Their financial desperation reached the point of being unable to compensate their professors. The policy was, in short: if they had the money, the professors would be paid. To make up for this deficiency, in the late 1890s, they constructed five Professors' Cottages. The only remaining cottage is one of the most visible features of the campus today.

Another move made in the 1890s to boost enrollment figures was the admittance of female students. The ladies were not originally given degrees or diplomas. They were rather given certificates of attendance, which basically meant they could teach. The first degree was conferred upon a female graduate in 1901.

In 1903, the prominent Methodist citizens of Shreveport, Louisiana offered Centenary 17 acres (69,000 m2), a brand new facility, and a sizeable monetary grant if they would relocate. Given the college's difficulty in procuring financial support where they were, and the several attractive opportunities Shreveport presented, it was not a matter of if they would move, but when. This turned out to be 1906, although the college was not there in its entirety until 1908.

After the college's departure, the campus sat unused for fifteen years. In the mid-1920s it was used as a tuberculosis hospital. But by 1935, the campus was in a state of extreme disrepair, and on the brink of condemnation. The three buildings had three different owners, two of whom chose to sell the rights for demolition. The East Wing and Centre Building were both demolished, and the salvageable materials from them sold for scrap. There were many buildings constructed in that time from Jackson to New Orleans whose materials included those of the Main Academic Building. The Old Centenary Inn—currently a bed and breakfast—in Jackson was built entirely from the remains of the East Wing Dormitory.

The West Wing remained standing because its owners had come up with a way to make it far more lucrative than just knocking it down. From 1938 to 1965, the West Wing Dormitory was low-income housing. The campus itself was used as a trailer park. To this day, there are visible remnants of the residences that were here during that time.

In the 1970s, the only use the campus saw was a baseball field, which happened to be on the site of the College's baseball field more than 80 years earlier. In 1977, not long before it was to be demolished, the West Wing was saved due to the efforts of many influential citizens in and around Jackson. The State of Louisiana purchased and restored the West Wing, Professor's Cottage, and surrounding 43 acres (170,000 m2). The West Wing was added to the National Register of Historic Places in 1979, and Centenary State Historic Site was born. 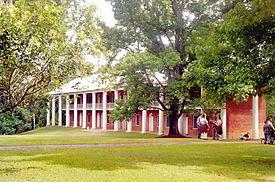 Centenary State Historic Site is run by the Louisiana Office of State Parks. It is a rather young site, and there is much that can still be learned and done to make it more educationally profitable. It serves not only as a glimpse into the past of Centenary College of Louisiana, but to early education in Louisiana, Civil War medicine, the foundation of Jackson, and many other areas of local and state history.