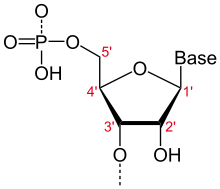 Directionality, in molecular biology and biochemistry, is the end-to-end chemical orientation of a single strand of nucleic acid. The chemical convention of naming carbon atoms in the nucleotide sugar-ring numerically gives rise to a 5'-end and a 3'-end (usually pronounced "five prime end" and "three prime end"). The relative positions of structures along a strand of nucleic acid, including genes and various protein binding sites, are usually noted as being either upstream (towards the 5'-end) or downstream (towards the 3'-end).

This naming convention is important because nucleic acids can only be synthesized in vivo in a 5'-to-3' direction, because the polymerase used to assemble new strands must attach a new nucleotide to the 3'-hydroxyl (-OH) group via a phosphodiester bond. By convention, single strands of DNA and RNA sequences are written in 5'-to-3' direction.

The 5'-end (pronounced "five prime end") designates the end of the DNA or RNA strand that has the fifth carbon in the sugar-ring of the deoxyribose or ribose at its terminus. A phosphate group attached to the 5'-end permits ligation of two nucleotides, i.e., the covalent binding of a 5'-phosphate to the 3′-hydroxyl group of another nucleotide, to form a phosphodiester bond. Removal of the 5'-phosphate prevents ligation. To prevent unwanted nucleic acid ligation (e.g. self-ligation of a plasmid vector in DNA cloning), molecular biologists commonly remove the 5'-phosphate with a phosphatase.

The 5'-end of nascent messenger RNA is the site at which post-transcriptional capping occurs, a process which is vital to producing mature messenger RNA. Capping increases the stability of the messenger RNA while it undergoes translation, providing resistance to the degradative effects of exonucleases.[citation needed] It consists of a methylated nucleotide (methylguanosine) attached to the messenger RNA in a rare 5'- to 5'-triphosphate linkage.

The 5'-untranslated-region (5'-UTR) is a region of a gene which is transcribed into mRNA, and is located at the 5'-end of the mRNA, but which does not contain protein-coding sequence. The 5'-untranslated region is the portion of the DNA starting from the cap site and extending to the base just before the AUG translation initiation codon. While not itself translated, this region may have sequences, such as the ribosome binding site and Kozak sequence, which determine the translation efficiency of the mRNA, or which may affect the stability of the mRNA. 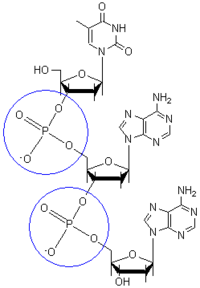 The 3'-end of a strand is so named due to it terminating at the hydroxyl group of the third carbon in the sugar-ring, and is known as the tail end. The 3'-hydroxyl is necessary in the synthesis of new nucleic acid molecules as it is ligated (joined) to the 5'-phosphate of a separate nucleotide, allowing the formation of strands of linked nucleotides.

Molecular biologists can use nucleotides that lack a 3'-hydroxyl (dideoxyribonucleotides) to interrupt the replication of DNA. This technique is known as the dideoxy chain-termination termination method or the Sanger method, and is used to determine the order of nucleotides in DNA.

The 3'-end of nascent messenger RNA is the site of post-transcriptional polyadenylation, which attaches a chain of 50 to 250 adenosine residues to produce mature messenger RNA. This chain helps in determining how long the messenger RNA lasts in the cell, influencing how much protein is produced from it.

The 3'-flanking region is a region of DNA that is not copied into the mature mRNA, but which is present adjacent to 3'-end of the gene. It was originally thought that the 3'-flanking DNA was not transcribed at all, but it was discovered to be transcribed into RNA and quickly removed during processing of the primary transcript to form the mature mRNA. The 3'-flanking region often contains sequences that affect the formation of the 3'-end of the message. It may also contain enhancers or other sites to which proteins may bind.