A molecular machine, or nanomachine,[1] is any discrete number of molecular components that produce quasi-mechanical movements (output) in response to specific stimuli (input).[2] The expression is often more generally applied to molecules that simply mimic functions that occur at the macroscopic level. The term is also common in nanotechnology where a number of highly complex molecular machines have been proposed that are aimed at the goal of constructing a molecular assembler. Molecular machines can be divided into two broad categories; synthetic and biological.

Molecular systems capable of shifting a chemical or mechanical process away from equilibrium represent a potentially important branch of chemistry and nanotechnology. As the gradient generated from this process is able to perform useful work these types of systems, by definition, are examples of molecular machinery.

There are two thought experiments that form the historical basis for molecular machines: Maxwell's demon and Feynman's Ratchet (or Brownian ratchet). Maxwell's Demon is well described elsewhere, and a slightly different interpretation of Richard Feynman's ratchet is given here.

Imagine a very small system (seen below) of two paddles or gears connected by a rigid axle and that it is possible to keep these two paddles at two different temperatures. One of the gears (at T2) has a pawl that is rectifying the system motion, and therefore, the axle can only move in a clockwise rotation, and in doing so, it could lift a weight (m) upward upon ratcheting. Now imagine if the paddle in box T1 was in a much hotter environment than the gear in box T2; it would be expected that the kinetic energy of the gas molecules (red circles) hitting the paddle in T1 would be much higher than the gas molecules hitting the gear at T2. Therefore, with lower kinetic energy of the gases in T2, there would be very little resistance from the molecules on colliding with the gear in the statistically opposite direction. Further, the ratcheting would allow for directionality, and slowly over time, the axle would rotate and ratchet, lifting the weight (m).

As described, this system may seem like a perpetual motion machine; however, the key ingredient is the heat gradient within the system. This ratchet does not threaten the second law of thermodynamics, because this temperature gradient must be maintained by some external means. Brownian motion of the gas particles provides the power to the machine, and the temperature gradient allows the machine to drive the system cyclically away from equilibrium. In Feynman's ratchet, random Brownian motion is not fought against, but instead, harnessed and rectified. Unfortunately, temperature gradients cannot be maintained over molecular scale distances because of molecular vibration redistributing the energy to other parts of the molecule. Furthermore, despite Feynman's machine doing useful work in lifting the mass, using Brownian motion to power a molecular level machine does not provide any insight on how that power (or potential energy of the lifted weight, m) can be used to perform nanoscale tasks.

Unlike macroscopic motion, molecular systems are constantly undergoing significant dynamic motions subject to the laws of Brownian mechanics (or Brownian motion), and as such, harnessing molecular motion is a far more difficult process. At the macroscopic level, many machines operate in the gas phase, and often, air resistance is neglected, as it is insignificant, but analogously for a molecular system in a Brownian environment, molecular motion is similar "to walking in a hurricane, or swimming in molasses." The phenomenon of Brownian motion (observed by Robert Brown (botanist), 1827) was later explained by Albert Einstein in 1905. Einstein found that Brownian motion is a consequence of scale and not the nature of the surroundings. As long as thermal energy is applied to a molecule, it will undergo Brownian motion with the kinetic energy appropriate to that temperature. Therefore, like Feynman's strategy, when designing a molecular machine, it seems sensible to utilize Brownian motion rather than attempt to fight against it.

Like macroscopic machines, molecular machines typically have movable parts. However, while everyday macroscopic machines may provide inspiration for molecular machines, it is misleading to draw analogies between their design strategy; the dynamics of large and small length scales are simply too different. Harnessing Brownian motion and making molecular level machines is regulated by the second law of thermodynamics, with its often counter-intuitive consequences, and as such, we need another inspiration.

Although it is a challenging process to harness Brownian motion, nature has provided us with several blueprints for molecular motion performing useful work. Nature has created many useful structures for compartmentalizing molecular systems, hence creating distinct non-equilibrium distributions; the cell membrane is an excellent example. Lipophilic barriers make use of a number of different mechanisms to power motion from one compartment to another.

From a synthetic perspective, there are two important types of molecular machines: molecular switches (or shuttles) and molecular motors. The major difference between the two systems is that a switch influences a system as a function of state, whereas a motor influences a system as function of trajectory. A switch (or shuttle) may appear to undergo translational motion, but returning a switch to its original position undoes any mechanical effect and liberates energy to the system. Furthermore, switches cannot use chemical energy to repetitively and progressively drive a system away from equilibrium where a motor can.

A wide variety of rather simple molecular machines have been synthesized by chemists. They can consist of a single molecule; however, they are often constructed for mechanically-interlocked molecular architectures, such as rotaxanes and catenanes. 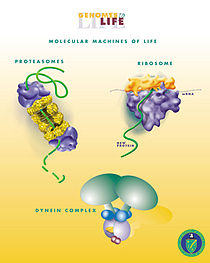 The most complex molecular machines are found within cells. These include motor proteins, such as myosin, which is responsible for muscle contraction, kinesin, which moves cargo inside cells away from the nucleus along microtubules, and dynein, which produces the axonemal beating of motile cilia and flagella. These proteins and their nanoscale dynamics are far more complex than any molecular machines that have yet been artificially constructed.

The detailed mechanism of ciliary motility has been described by Satir in a 2008 review article. A high-level-abstraction summary is that, "[i]n effect, the [motile cilium] is a nanomachine composed of perhaps over 600 proteins in molecular complexes, many of which also function independently as nanomachines."[1]