St. Mary's Church (Polish: Bazylika Mariacka, German: Marienkirche) or, properly, Basilica of the Assumption of the Blessed Virgin Mary (Polish: Bazylika Mariacka Wniebowzięcia Najświętszej Maryi Panny w Gdańsku) is a Roman Catholic church in Gdańsk, Poland, which is the largest brick church in the world. It was begun in 1379. (The tallest brick church is St. Martin's Church, Landshut, Germany.)

St. Mary's is one of the largest European Brick Gothic buildings, which include castles. From 1577 until 1945, when it was named the Marienkirche, it was the biggest Evangelical Lutheran church in the world. It is 105.5 m long, and the nave is 66 m wide. Inside the church is room for 25,000 people. It is an aisled hall church with a transept. It is a co-cathedral in the Roman Catholic Archdiocese of Gdańsk, along with the main cathedral for the Archdiocese, the Bazylika archikatedralna w Gdańsku-Oliwie (Basilica-Cathedral of Gdańsk-Oliwa). 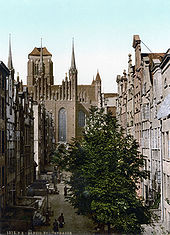 According to tradition, as early as 1243 a wooden Church of the Assumption existed at this site, built by Prince Swiętopełk II.[1]

The foundation stone for the new brick church was placed on on March 25, 1343, the feast of the Annunciation.[1] At first a six-span basilica with a low turret was built, erected from 1343 to 1360. Parts of the pillars and lower levels of the turret have been preserved from this building.

In 1379 the masonry master Heinrich Ungeradin led his team to start construction of the present church. St. Mary's Church in Lübeck, the mother of all Brick Gothic churches dedicated to St. Mary in Hanseatic cities around the Baltic, is believed to be the archetype of the building. By 1447 the eastern part of the church was finished, and the tower was raised by two floors in the years 1452-1466.

In 1577, during the Reformation, the church became a Lutheran church. Since the kings of Poland remained Catholic and were the nominal heads of the City following the decay of the Monastic state of the Teutonic Knights, they authorized building the baroque Catholic Royal Chapel. It was erected by Tylman Gamerski near St. Mary's Church for the king's service when he visited the City. 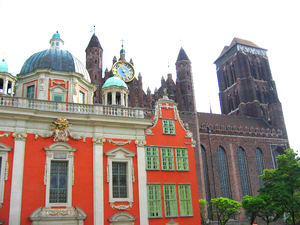 After the Partitions of Poland, Prussian authorities took many precious items from the church, including cloths and vestments made of fabrics from ancient Mesopotamia and ancient Egypt, obtained during the Crusades; as well as renaissance wares from Venice, Florence and Lucca (more than 1000 items altogether).[2] Many artifacts were sold: the winged triptych by Jan van Wavere, sold to archduke Maximilian, is today held in the Church of the Teutonic Order in Vienna; and the sculpture of Madonna and Child by Michael of Augsburg from the main altar, sold to count Sierakowski, is today located in the chapel in Waplewo Wielkie.[1] In addition, the Prussians melted down gold and silver reliquaries for reuse; they also reused golden threads from embroideries in uniforms for Prussian officers.[2] 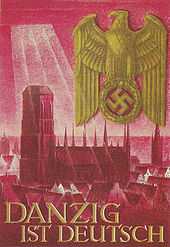 The church on a German Nazi propaganda poster; the inscription reads: "Danzig is German".

Until the 20th century, both the church interior and exterior were well preserved. The church was severely damaged in World War II, during the storming of Danzig city by the Red Army in March 1945. The wooden roof burned completely and most of the ceiling fell in. Fourteen of the large vaults collapsed. The windows were destroyed. In places the heat was so intense that some of the bricks melted, especially in the upper parts of the tower, which acted as a giant chimney.[1] The floor of the church, containing priceless gravestone slabs, was torn apart, allegedly by Soviet soldiers attempting to loot the corpses buried underneath.

Most of the artworks from the interior survived, as they had been evacuated for safekeeping to the villages surrounding the city. Many of these have returned to the church, but some are displayed in various museums around Poland. The diocese sought to secure their return.

After WWII, Poland expelled the ethnic German population of the city as part of the border changes promulgated at the Potsdam Conference. The city was gradually repopulated by Poles, and Polish authorities handed St. Mary's Church to the control of the Catholic diocese.

The reconstruction started shortly after the war in 1946. The roof was rebuilt in August 1947, using reinforced concrete. After the basic reconstruction was finished, the church was reconsecrated on November 17, 1955. The reconstruction and renovation of the interior is an ongoing effort and continues to this day.

On November 20, 1965, by papal bull, Pope Paul VI elevated the church to the dignity of the basilica. On February 2, the Congregation for Bishops established the Bazylikę Mariacką as the Gdansk Co-Cathedral in the Roman Catholic Archdiocese of Gdańsk.[1] The main cathedral for the Archdiocese is the Bazylika archikatedralna w Gdańsk-Oliwa. (Basilica-Cathedral of Gdańsk-Oliwa).

St. Mary's Church is a triple-aisled hall church with a triple-aisled transept. Both the transept and the main nave are of similar width and height, which is a good example of late gothical style. Certain irregularities in the form of the northern arm of the transept are remnants of the previous church situated on the very same spot.

The vaulting is a true piece of art, and was in great part restored after the war. Main aisle, transept and presbytery are covered by net vaults, while the side aisles are covered by crystal vaults.

The exterior is dominated by plain brick plains and high and narrow gothical arch windows. Such construction was possible due to placing corbels and buttresses inside of the church and erecting chapels right in between them. Gables are divided by a set of brick pinnacles. All corners are accentuated by turrets crowned by with metal headpieces (reconstructed after 1970). 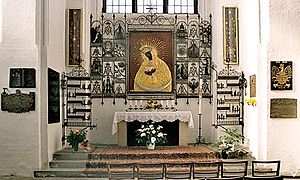 Chapel to Our Lady of Gate of Dawn.

The church is decorated within with several masterpieces of Gothic, Renaissance and Baroque painting.

There are two bells in St Mary's Church. Both of them were cast in 1970 by foundry Felczyński in Przemyśl. The larger one is called Gratia Dei, weighs 7850 kg, and sounds in nominal F sharp. The smaller bell is the so called Ave Maria, weighs 2600 kg, and sounds in C sharp. Of the prewar chimes, there still exist two bells. Osanna from 1632 today can be found in St. Andrew's Church, Hildesheim, Germany, and Dominicalis from 1719 can be found under the name Osanna in St. Mary's Church, Lübeck, Germany.