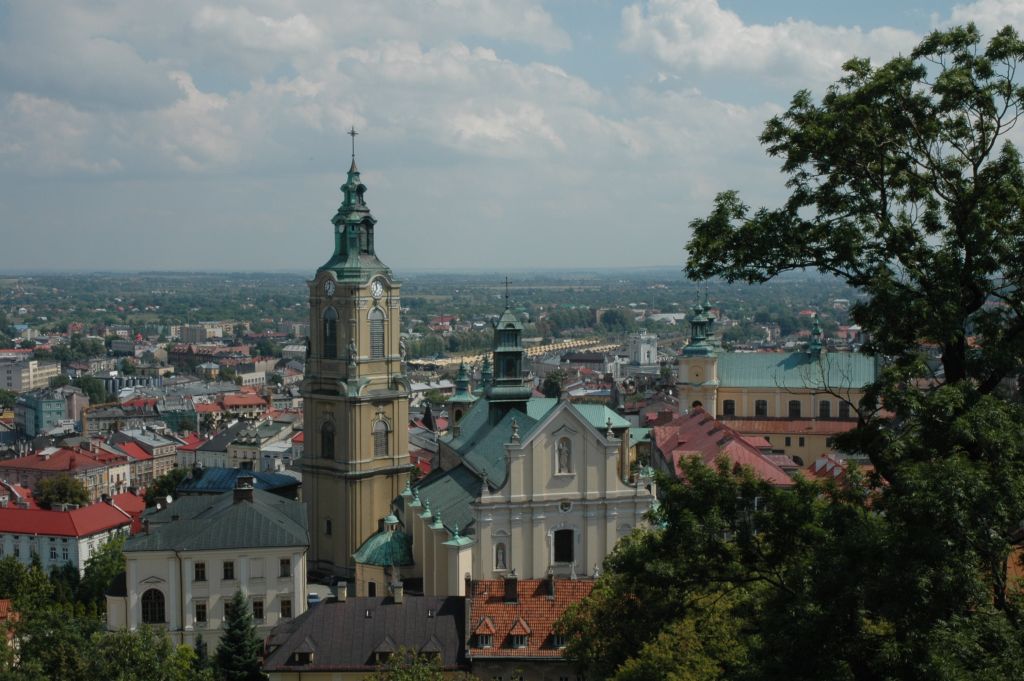 Przemyśl owes its long and rich history to the advantages of its geographic location. The city lies in the Przemyśl Gate, an area connecting mountains and lowlands, with easy communication and fertile soil. It also lies on the navigable . Important trade routes passed through Przemyśl and ensured the city's importance.

Przemyśl is the second oldest city in southern Poland, after . It appears to have been founded as early as the 8th century. The region subsequently became part of the n state. Archeological remains testify to the presence of a monastic settlement as early as the 9th century. Upon the invasion of the Hungarian tribes into the heart of the Great Moravian Empire around 899, the of the area declared their allegiance to Hungarian Empire. The Przemyśl region then became a site of contention between Poland, and beginning in at least the 9th century. The area was mentioned for the first time in 981 by Nestor, when Vladimir I of Kievan Rus took it over on the way into Poland. In 1018 Przemyśl returned to Poland, 1031 went back to Rus, and in 1340 recovered it.Between 11th and 12th century the city was a capital of , one of the n principalities. It became part of the Polish kingdom in the second half of the 13th century. Around this time Przemyśl was granted city rights based on , confirmed in 1389 by king .

The city prospered as an important trade centre during the period. Like nearby (Lwów in Polish), the city's population consisted of a great number of nationalities, including , , s, Germans, and . The prosperity came to an end in the middle of the 17th century, due to wartime destruction during The Deluge and the general decline of the at this time. The city decline lasted for over a hundred years, and only at the end of the 18th century did it recover its former levels of population.

In 1772, as a consequence of the First Partition of Poland, Przemyśl became part of the Austrian empire, in what the Austrians called the . In 1861 railways were built to connect Przemyśl with Kraków to the west and Lwów (Lemberg) to the east. In the middle of the 19th century, due to the growing conflict between and Russia over the , Austria grew more mindful of Przemyśl's strategic location near the border with the . During the , when tensions mounted between Russia and , the city was turned into a fortress, surrounded by a ring of s 15 km in circumference, containing 30 modern fortification works.

With technological progress in during the second half of the 19th century, the old fortifications rapidly became obsolete. The longer range of artillery necessitated the redesign of fortresses so that they would be larger and able to resist the newly available guns. To achieve this, between the years 1888 and 1914 Przemyśl was turned into a first class , the third largest in Europe out of about 200 that were built in this period. Around the city, in a circle of circumference 45 km, 44 forts of various sizes were built. The older fortifications were modernised to provide the fortress with an internal defence ring. The fortress was designed to accommodate 85,000 soldiers and 956 s of all sorts.

In August 1914, at the start of the First World War, Russian forces defeated Austro-Hungarian forces in the opening engagements and advanced rapidly into Galicia. The Przemyśl fortress fulfilled its mission very effectively, helping to stop a 300,000 strong Russian army advancing upon the Carpathian Passes and Kraków, the n regional capital. The first siege was lifted by a temporary Austro-Hungarian advance. However, the Russian army resumed its advance and initiated a second siege of the fortress of Przemyśl in October, 1914. This time relief attempts were unsuccessful. Due to lack of food and exhaustion of its defenders, the fortress surrendered on March 22, 1915. The Russians captured 126,000 prisoners and 700 big guns. Before surrender, the complete destruction of all fortifications was carried out. The Russians did not linger in Przemyśl. A renewed offensive by the recaptured the destroyed fortress on June 3, 1915. During the fighting around Przemyśl, both sides lost up to 115,000 killed, wounded, and missing.

At the end of World War I, Przemyśl became disputed between renascent Poland and the . On November 1, 1918, a local provisional government was formed of representatives of Polish, Jewish, and Ukrainian inhabitants of the area. However, on November 3 a Ukrainian army overthrew the government, arrested its leader, and captured the eastern part of the city. The Ukrainian army was checked by a small Polish self-defence unit formed of World War I veterans and Orlęta, an organisation of young volunteers from Przemyśl high schools. The battlefront divided the town, with the western borough of Zasanie in Polish hands. Since neither side could cross the San River, both opposing forces awaited relief from the outside. That race was won by the Polish relievers: the volunteer expeditionary unit formed in Kraków arrived in Przemyśl on November 10. When the Polish ultimatum to the Ukrainians remained unanswered, on November 11 and November 12 the Polish forces crossed the San and expelled the outnumbered Ukrainian army in what became known as the .

After the , the town became a part of new . Although the capital of the was (see: ), Przemyśl recovered its nodal position as a seat of local church administration, as well as the garrison of the 10th Corps of the Polish Army - a staff unit charged with organising the defence of roughly 10% of Poland. As of 1931 the town had a population of 62,272.

After the invasion of Poland by and the , the border between the two invaders ran through the middle of the city along the until June, 1941. The town's population increased significantly due to the large influx of Jewish refugees from trying to cross the border with the Soviet Union. It is estimated that by mid-1941 the Jewish population of the city had grown to roughly 16,500. After the German invasion of the USSR in 1941, the eastern (Soviet) part of the city was too occupied by Germany. On June 20, 1942 the first group of 1,000 Jews was transported from the Przemyśl area to the concentration camp at and on July 15 a was created for all Jewish inhabitants of Przemyśl and its vicinity - some 22,000 people altogether.

The sealing of the in was implemented on July 14, 1942, with local Jews being given 24 hours to enter the Ghetto. By the time the sealing took place, on the following day, up to 24,000 Jews occupied the Ghetto. On July 27, 1942, the notified the and posted notices that an "Aktion" (forced resettlement) would soon be taking place, and that it would include almost all occupants. Exceptions were made for some essential, and Gestapo workers who would have their papers stamped accordingly. The extermination of Jews started soon after. Until September 1943 almost all Jews were sent to and . The local branches of the Polish underground and the Żegota managed to save 415 Jews. According to a postwar investigation in German archives, 568 Poles were executed by the Germans for helping the Jews in the area of Przemyśl.

The retook the town from German forces on July 27, 1944. In the postwar territorial settlement, the new border between Poland and the Soviet Union placed Przemyśl just within the . The border now ran only a few kilometers to the east of the city, cutting it off from much of its economic hinterland. Furthermore, due to the murder of Jews in the Nazi and the postwar expulsion of Ukrainians (in 1947's or "akcja Wisla"), the city's population (now overwhelmingly Polish) dropped to a mere 24,000. However, the city welcomed thousands of Polish migrants from Eastern Galicia. Their numbers restored the city's prewar population.

As a result of all these events, the growth of the city in the years after 1945 was stunted. Only in the 1990s, with the economic reforms of the late Soviet Union and later , allowed the border to be opened up and improve the city's economic prospects.

Museums
* Muzeum Narodowe, the National Museum
* Muzeum Dzwonów i Fajek, the Museum of Bells and Pipes
* Muzeum Diecezjalne, the museum

Members of elected from Krosno/Przemyśl constituency