Milton Keynes Dons F.C.
This article is about the club from Milton Keynes, founded in 2004. For information on its origins, see Relocation of Wimbledon F.C. to Milton Keynes.

/ˌmɪltən ˈkiːnz ˈdɒnz/; usually abbreviated to MK Dons) is an English professional football club founded in 2004 and based since 2007 at Stadium mk, Milton Keynes, Buckinghamshire. MK Dons are currently contesting Football League One, the third tier of English football, during the 2011–12 season.

Milton Keynes Dons were created on 21 June 2004 as the result of Wimbledon F.C.'s relocation from south-west London to the National Hockey Stadium in Milton Keynes nine months earlier. Although the team originally claimed the history of Wimbledon F.C. as its own, it stopped doing so in 2007, in part to ensure the recognition of its supporters groups by the Football Supporters Federation, which had previously boycotted them. Despite remaining a legal continuation of the original Wimbledon club, MK Dons has maintained since 2007 that it is a new team, founded in 2004.

Following Wimbledon F.C.'s relegation, MK Dons played in League One for the 2004–05 season and were relegated again to the fourth-tier League Two after 2005–06. Under the management of Paul Ince, the club won both the division and the Football League Trophy during the 2007–08 season, and was promoted back to League One for 2008–09, where as of 2011–12 they remain. 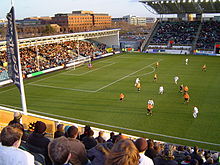 The first season for the club as MK Dons was the 2004–05 season. At the season's start, the team still being managed by former Wimbledon manager Stuart Murdoch, who was sacked after a long run of bad results, and replaced by Danny Wilson half-way through the campaign. Under their new manager, MK Dons managed to stay in League One on the final day of the season — but only because of Wrexham's 10-point deduction that had been their penalty for going into administration. The following season, MK Dons struggled all year, and were relegated to League Two. Wilson, as a result, was sacked.

Wilson's successor for 2006–07 was Martin Allen, who had just taken Brentford to the brink of a place in the Football League Championship. With a new manager taking charge of a team in a new division, MK Dons looked more consistent than they had done in either of the previous two seasons. They were in contention for automatic promotion right up to the last game, but eventually finished fourth and had to settle for a play-off place. They then suffered a defeat to Shrewsbury Town in the play-off semi-finals. During the 2007 summer break, Allen left MK Dons to take over at Leicester City.

For the 2007–08 season, former England captain Paul Ince took over as manager. MK Dons reached the final of the Johnstone's Paint Trophy, while topping the table for most of the season. The final was played on 30 March against Grimsby Town — Milton Keynes Dons won 2–0 at Wembley to bring the first professional trophy to Milton Keynes. The club capped the trophy win with the League Two championship, and the subsequent promotion to League One for the 2008–09 season. Following his successes, Ince left at the end of the season to manage Blackburn Rovers.

Ince's replacement was Roberto Di Matteo. In the 2008-9 season, MK Dons missed out to an automatic promotion spot by two points, finishing third behind Peterborough United and Leicester City. They were knocked out of the play-offs by Scunthorpe United, who defeated MK Dons by penalty shootout at stadium mk. Di Matteo left at the season's end for West Bromwich Albion.[1] His replacement was Ince, who returned a year after leaving.[2] Paul Ince resigned from the club on 16 April 2010, but remained manager until the end of the season.[3] On 10 May 2010, Karl Robinson was appointed as the club's new manager, with former England coach John Gorman as his assistant. At 29 years of age, Robinson is the youngest manager in the Football League.[4] In his first season in the club MK Dons finished 5th in 2010-11 Football League One. They faced Peterborough United in the play-off semifinals. Although they won the first leg 3-2, a 2-0 defeat at London Road meant they missed out on the play-off final.

On 4 June 2005, at the 2005 Football Supporters' Federation "Fans' Parliament" (AGM), the FSF refused the MK Dons Supporters Club membership of the FSF in a debate that, among other arguments, questioned why the Football League had yet to introduce any new rules to prevent the "franchising" of other football clubs in the future.[5][6] In addition, the FSF membership agreed with the Wimbledon Independent Supporters Association that the Milton Keynes Dons Supporters Association should not be entitled to join the FSF until they give up all claim to the history and honours of Wimbledon F.C. With this in mind, the FSF began discussions aimed at returning Wimbledon F.C.'s honours to the London Borough of Merton.

At its AGM on 5 June 2006, the FSF again considered a motion[8] proposed by the FSF Council to allow MK Dons Supporters Association membership if the honours and trophies of Wimbledon F.C. were given to the London Borough of Merton. In October 2006, agreement[9] was reached between the club, the MK Dons Supporters Association, the Wimbledon Independent Supporters Association and the Football Supporters Federation. The replica of the FA Cup plus all club patrimony gathered under the name of Wimbledon F.C. would be returned to the London Borough of Merton. Ownership of trademarks and website domain names related to Wimbledon F.C. would also be transferred to the Borough. The Borough subsequently transferred all trademarks to AFC Wimbledon. As part of the same deal it was agreed that any reference made to Milton Keynes Dons F.C. should refer only to events subsequent to 7 August 2004 (the date of the first League game of Milton Keynes Dons F.C.). As a result of this deal, the FSF announced that the supporters of Milton Keynes Dons F.C. would be permitted to become members of the federation, and that it would no longer appeal to the supporters of other clubs to boycott MK Dons matches.[10]

On 2 August 2007, MK Dons transferred the replica trophies and all Wimbledon F.C. memorabilia to the London Borough of Merton.[11] 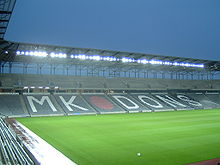 The club's first stadium was the National Hockey Stadium, which was temporarily converted for football for the duration of the club's stay. Their lease on this ground ended in May 2007.

On 18 July 2007, the club's new 22,000 seater, stadium mk in Denbigh hosted its first game, a restricted entrance event against a young Chelsea XI.[12] The stadium was officially opened on 29 November 2007 by Queen Elizabeth II.[13] The stadium features an open concourse at the top of the lower tier, an integrated hotel with rooms looking over the pitch and conference facilities

The complex also includes a 3,000 seat indoor arena, where the MK Lions basketball team will be based. The completion of this arena has been delayed due to deferral of proposed commercial developments around the site.[14]

In May 2009 stadium mk was named as one of 15 stadia put forward as potential hosts for the unsuccessful England 2018 FIFA World Cup bid. Plans were announced to extend the capacity to 44,000.[15]

From the start of the 2008–09 season, no reserve side has been entered into any organised competition or league.[18]

Dean Lewington, the present captain of MK Dons, has played more matches for the team than any other player. Pictured in 2011, he is also one of only two former Wimbledon players left in the club's squad.

This list contains players who have made 100 or more league appearances. Appearances and goals apply to league matches only; substitute appearances are included. Names in bold denote current MK Dons players. 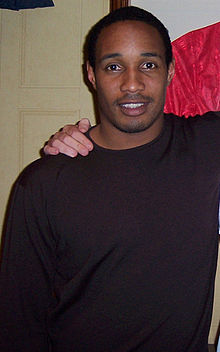 The first manager of Milton Keynes Dons was Stuart Murdoch, who had previously been manager of Wimbledon.[20] Murdoch only lasted three months before being sacked[21] — his assistant, Jimmy Gilligan, managed the club for a month before Murdoch's replacement was revealed to be Danny Wilson.[21][22][23] Wilson managed to keep the team up during the inaugural 2004–05 season,[16] but failed to repeat this feat during the next season.[16] Following relegation,[16] Wilson was shown the door and replaced with Martin Allen.[24] After Allen's team fell at the play-offs,[16] he left to manage Leicester City.[25] Paul Ince was appointed manager for the 2007–08 season,[26] and proved to be a shrewd appointment as MK Dons won the League Two championship as well as the Football League Trophy.[16] Ince too left after only a season, to become manager of Blackburn Rovers.[27] Former Chelsea player Roberto di Matteo was then appointed in July 2008,[28][29] and left after a season to manage West Bromwich Albion.[1] Ince was reappointed in his stead on 3 July 2009.[2] Paul Ince resigned as Manager on April 16, 2010, stating "a reduction in funds for next season was the reason behind his decision to leave", although he will remain with the club until the end of the 2009/10 season.

Karl Robinson was appointed manager of League One team Milton Keynes Dons on 10 May 2010, having previously been the club's assistant manager under previous boss Paul Ince.[30] At 30 years of age, he is the youngest manager in the Football League and former England coach John Gorman was named his number two. He is also the youngest person to ever acquire a UEFA Pro Licence at the age of 29.