Action 52 is an unlicensed multicart consisting of 52 individual and original video games, released in September 1991 for the Nintendo Entertainment System and in May 1993 for the Sega Genesis consoles by Active Enterprises (a Super Nintendo Entertainment System version was advertised in some magazines, but never released). It initially retailed for the comparatively high price of US$199 (or "less than $4 for each game"),[1] and became notorious among gamers for the abysmal quality of its games. Many video game collectors value Action 52 for its notoriety and rarity.

The cartridge states that it contains 52 "new and original exciting games". The games cover a variety of genres, although the most common are scrolling shooters and platform games.[2] Examples of scrolling shooters include Star Evil, G-Force, Thrusters, and Megalonia. Some of the platform games available are Ooze, Non Human, Alfred N the Fettuc, and Bubblegum Rossie. 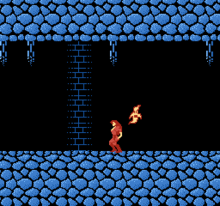 Gameplay of Haunted Halls of Wentworth from the NES version (1991) of Action 52. Developed by Active Enterprises, this version contains several fatal glitches that frequently cause the games on the cartridge to crash, freeze, or sometimes shift in focus.

The NES version of Action 52 was internally developed by Active Enterprises, also the publisher of the game.[3] The games cover a variety of genres, although the most common are scrolling shooters and platform games.[2] Examples of scrolling shooters include Star Evil, G-Force, Thrusters, and Megalonia. Some of the platform games available are Ooze, Non Human, Alfred N the Fettuc, and Bubblegum Rossie. The majority of the titles included on the cartridge had major glitches. The games have been known to freeze or crash due to programming flaws, have incomplete and/or endless levels, unresponsive controls, and confusing design. In the game manual, each title had a one-sentence description. Some titles were described as completely different games and some were incorrectly described or miscategorized.

The "Think" drum break from Lyn Collins' song "Think (About It)" is used in the beginning sequence of the NES version. The sound generated for moving the select cursor on the NES version was used for the Power Player Super Joy III's menu. Active Enterprises advertised a competition in which anyone who could complete level 5 of the NES version of Ooze would be entered into a prize drawing to win $104,000 ($52,000 cash and scholarship of same value). The game was reported to crash on level 3, making this prize impossible to win[4] without use of emulator or using in-game exploit, further making the contest a failure.

The Cheetahmen was the "featured" game on the Action 52 multicart, and there were initial plans for a line of merchandise including action figures, t-shirts, a comic book series and even a television cartoon based on the characters (an advertisement for Cheetahmen action figures, displaying prototype sketches, was included in the aforementioned comic book).[5][6] These plans quickly fell through as negative word-of-mouth and reviews mounted. 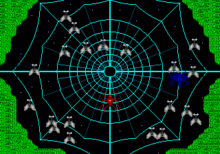 Gameplay of Spidey from the Genesis version (1993) of Action 52. Developed by FarSight Technologies, this version features an alternative lineup of games, many of which feature more work put into design and technical issues than the NES version.

Several new games were introduced in the Sega version. A number of these have the same name as games on the NES cartridge, although they are not the same game; the Sega Haunted Hills, for instance, is entirely different from the NES Haunted Hills. Other games feature other changes, including a version of The Cheetahmen in which the titular Cheetahmen rescue captured cheetah cubs from monsters, which is completely different from the original NES game. The bosses from the NES version appear as enemies.

Vince Perri of Miami, Florida created Action 52. He showcased the game at the International Winter Consumer Electronics Show.[8] The breakthrough came by accident. "I happened to see my son playing an illegal product made in Taiwan that had 40 games on it. The whole neighborhood went crazy over it," Perri said. "I figured I'd do it legally. It's obvious when you see something like that, you know there's something there."[9]

Several of the songs from the NES version of Action 52 were plagiarized from example tunes included in Activision's The Music Studio for Atari ST. The games with plagiarized music include Fuzz Power, Silver Sword, French Baker, Streemerz, Time Warp Tickers, and Ninja Assault. Those songs were composed by Ed Bogas.[10] Additionally, programmer Kevin Horton analyzed the music code of Action 52, and found that it matched a music engine programmed by Sculptured Software.[11] This sound engine also appears in other games by Sculptured Software, including Day Dreamin' Davey, Eliminator Boat Duel, the NES version of Monopoly, and Metal Mech.

For the original NES collection, Perri raised $5 million from private backers in Europe and Saudi Arabia. He and Raul Gomila employed several college students to do the programming which was programmed on an Atari ST, and contracted out technical work to Cronos Engineering Inc., a Boca Raton company that had done work for IBM.[9] Action 52 may have originally been designed to include 60 games, as evidenced by eight menu templates present in the ROM, as well as many unused tiles.[12] The extra eight games may have been cut due to the large size of the cartridge (two megabytes), and a probable increased production cost.

The Sega Genesis version, released two years later, was developed by FarSight Studios, who had also developed Color a Dinosaur for the NES. Plans for a Super NES version of the cartridge were announced, but Active Enterprises withdrew from the video game industry shortly thereafter, and no copies are known to exist.

The Cheetahmen consists of six levels, two for each of the three Cheetahmen. The second level includes a boss battle. Other than the bosses, all of the other enemies are characters from the other games, including Saddam Hussein parody Satán Hossain from Storm Over the Desert, a simple overhead tank game where running over Hossain, who appears very frequently, gives the player another life.

The backstory of the Cheetahmen was given in a 12-page comic book included with Action 52. Mad scientist Dr. Morbis kills a mother cheetah while on safari in Africa, then takes her three cubs for his genetic research. Subjected to his experiments, the cubs grow into half-cheetah, half-human creatures. Once they learn of Morbis's evil plans, they turn on him, and he in turn creates an army of half-animal humans (known as "Sub-Species") to stop the Cheetahmen once and for all.

The NES version of the game had an intro sequence that told a story as well, where a boy called the "Action Gamemaster" is at home playing a video game when a robotic arm reaches through the screen and pulls him into the game by his leg. He meets the Cheetahmen, who then run away. The Gamemaster does not appear in the rest of the game, although the manual summary implies that he transforms into the Cheetahmen, one after another. 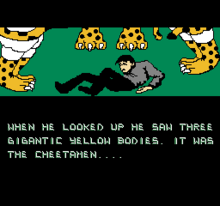 In Cheetahmen II the player again assumes the role of one of the three Cheetahmen (Aries, Apollo and Hercules); after defeating a boss at the end of the second level, they switch to the next Cheetahman for the following two levels, as in the Action 52 version. Due to a bug, it is impossible to get to the levels in which one plays Cheetahman Aries without altering the ROM image or experiencing a glitch that very rarely starts the game on these two levels.

Cheetahmen II is famous for its music,[13] and for its lack of quality in all other areas. Like Action 52, it was not licensed by Nintendo.

In October 2007, it was reported that Cheetahman II's in-game music was being sampled and remixed or arranged for use in Nico Nico Douga videos.[14] Remixes and arrangements included classical, ballad, and heavy metal styles. More than 100 videos had been posted to the Nico Nico Douga site within only a few days of the first one appearing.[citation needed]