She was the daughter of a Russian military officer, a nobleman of the Russian Empire. Nadya’s father, Krupski Konstantin Ignat’evich, was orphaned in 1847 at nine years of age. He was educated and given a commission as an infantry officer in the Russian Army. Just before leaving for his assignment in Poland he married Nadya’s mother. After six years of service, Krupski lost favor with his supervisors and was charged with “un-Russian activities.” He may have been suspected of being involved with revolutionaries. Following this time he worked in factories or wherever he could find work until later in life when he was recommissioned just before his death.[2]

Her mother, Elizaveta Vasilyevna Tistrova was the daughter of landless Russian nobles. Elizaveta’s parents died when she was young and she was enrolled in the Bestuzhev Courses, which happened to be the highest formal education available to women in Russia during this time. After earning her degree Elizaveta went on to work as a governess for noble families until she married Krupsky.[3]

Having parents who were well educated, and of aristocratic descent, combined with firsthand experience with lower class working conditions probably lead to the formation of many of Nadya’s ideologies. “From her very childhood Krupskaya was inspired with the spirit of protest against the ugly life around her.”[4]

One of Nadya’s friends from gymnasium, Ariadne Tyrkova, described Krupskaya as “a tall, quiet girl, who did not flirt with the boys, moved and thought with deliberation, and had already formed strong convictions… She was one of those who are forever committed, once they have been possessed by their thoughts and feelings….”[5] Nadya attempted to attend two different secondary schools before finding the perfect fit with Prince A.A. Obolensky's Female Gymnazium “a distinguished private girls’ secondary school in Petersburg.” This education was probably more liberal than most other gymnasiums since it was noted that some of the staff were former revolutionaries.[6]

After her father’s death Krupskaya and her mother gave lessons as a source of income. Krupskaya had expressed an interest in entering the education field from a young age. She was particularly drawn to Tolstoy’s theories on education, which were fluid instead of structured. They focused on the personal development of each individual student and centered on the importance of the teacher-student relationship.[7]

This led Krupskaya to study many of Tolstoy’s works, including his theories of reformation. These were peaceful, law abiding ideologies, which focused on people abstaining from unneeded luxuries and being self dependent instead of hiring someone else to tend your house, etc. Tolstoy had a lasting impression on Krupskaya, since it was said she had “a special contempt for stylish clothes and comfort.”[8] She was always modest in dress, as were her furnishings in her home and office. 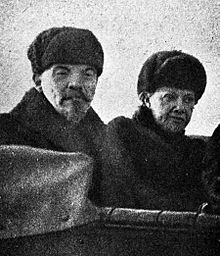 Krupskaya with her husband, Vladimir Lenin, 1919.

As a devoted, lifelong student, Krupskaya began to participate in several discussion circles. These groups got together to study and discuss particular topics for the benefit of everyone involved. It was later, in one of these circles that Krupskaya was first introduced to the theories of Marx. This piqued her interest as a potential way of making life better for her people. Krupskaya began an in-depth study of the subject. This was difficult since such books had been banned by the Russian government. Consequently, revolutionaries had been collecting such books and keeping them in underground libraries.

It was at a similar discussion circle that Krupskaya first met Vladimir Ilyich Ulyanov, a dedicated Marxist who later came to be called Lenin. Krupskaya was impressed by his speeches, but not by his personality, at least not at first. It is hard to know very much of the courtship between Lenin and Krupskaya as neither party spoke often of personal matters.

In October 1896, several months after Lenin was arrested, Krupskaya was also arrested. After some time Lenin was sentenced to exile in Siberia. They had very little communication while in prison but before leaving for Siberia, Lenin wrote a “secret note” to Krupskaya which was delivered by her mother. It suggested that she could be permitted to join him in Siberia if she told people she was his fiancée. At that time Krupskaya was still awaiting sentencing in Siberia. Krupskaya was permitted to accompany Lenin, but only under the stipulation that they were to be married as soon as she arrived. In her memoirs, Krupskaya notes "with him even such a job as translation was a labour of love".[9] Her relationship with Lenin was more professional than marital – which Kollontai compared to slavery – but she remained loyal, never once considering divorce.

Krupskaya is believed to have suffered from Graves' disease,[10] an illness affecting the thyroid gland in the neck which causes the eyes to bulge and the neck to tighten. In female sufferers it can also disrupt the menstrual cycle, which may explain why Lenin and Krupskaya never had children (and the rumors about Lenin allegedly choosing to have an affair with Inessa Armand).

Upon his release Lenin went off to Europe and settled in Munich where Krupskaya later met up with him upon her release (1901). After she had arrived the couple moved to London.

Krupskaya's political life was active: she was a functionary of the bolshevik faction of the Russian Social Democratic Labour Party from 1903. She became secretary of the Central Committee in 1905; she returned to Russia the same year, but left again after the failed revolution of 1905 and worked as a teacher in France a couple of years.

After the October Revolution in 1917, she was appointed deputy to Anatoliy Lunacharskiy, the People's Commissar for Education, where she took charge of Vneshkol'nyi Otdel the Adult Education Division; she became chairman of the education committee in 1920 and was deputy commissar (government minister) from 1929 to 1939. She was instrumental in the foundation of Komsomol and the Pioneer movement as well as the Soviet educational system, including the censorship and political indoctrination within it. She was also fundamental in the development of Soviet librarianship.

Krupskaya became a member of the Central Committee of the Communist Party of the Soviet Union in 1924, a member of its control commission in 1927, a member of the Supreme Soviet in 1931 and an honorary citizent in 1931. She apparently favored Stalin in the great debates between the Left Opposition and the CPSU majority of the 1920s. In 1925, she attacked Lev Trotsky in a polemic that was in response to Trotsky's tract The Lessons of October. In it, she stated that "Marxist analysis was never Comrade Trotsky’s strong point." In relation to the debate around Socialism in one country versus Permanent Revolution, she asserted that Trotsky "under-estimates the role played by the peasantry." Furthermore, she held that Trotsky had misinterpreted the revolutionary situation in post-WWI Germany. During the congress of 1925, she initially supported Grigory Zinoviev and Lev Kamenev, but eventually voted for the process against Nikolai Bukharin and the exclusion of Trotsky, Zinoviev and Kamenev from the party.[11]

Krupskaya is the author of the biography Reminiscences of Lenin,[12] which chronicles the life of her husband. Her biography is the most detailed account of Lenin’s life before coming to power. It ends in 1919, shortly after the Bolsheviks took power. 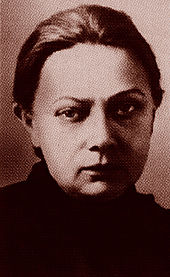 Before the revolution, Krupskaya worked five years as an instructor for a factory owner who offered evening classes for his employees. Legally, reading, writing and arithmetic were taught. Illegally, classes with a revolutionary influence were taught for those students who might be ready for them. Krupskaya and other instructors were relieved of duty when nearly 30,000 factory workers in the area went on strike for better wages.[13] Even after the revolution her emphasis was on “the problems of youth organization and education.”[14] In order to become educated they needed better access to books and materials.[15]

Pre-revolutionary Russian libraries had a tendency to exclude particular members. Some were exclusively for higher classes and some were only for employees of a particular company's "Trade Unions". In addition they also had narrow, Orthodox literature. It was hard to find any books with new ideas, which is exactly why the underground libraries began. Another problem was the low level of literacy of the masses.

The revolution did not cause an overnight improvement in the libraries. In fact, for a while there were even more problems. The Trade Unions still refused to allow general public use, funds for purchasing books and materials were in short supply and books that were already a part of the libraries were falling apart. In addition there was a low interest in the library career field due to low income and the libraries were sorely in need of re-organization.

Krupskaya directed a census of the libraries in order to address these issues.[16] She encouraged libraries to collaborate and to open their doors to the general public. She encouraged librarians to use common speech when speaking with patrons. Knowing the workers needs was encouraged; what kind of books should be stocked, the subjects readers were interested in, and organizing the material in a fashion to better serve the readers. Committees were held to improve card catalogs.

Krupskaya stated at a library conference: “We have a laughable number of libraries, and their book stocks are even more inadequate. Their quality is terrible, the majority of the population does not know how to use them and does not even know what a library is.”[17]

She also sought better professional schools for librarians. Formal training was scarce in pre-revolutionary Russia for librarians and it only truly began in the twentieth century. Krupskaya, therefore, advocated the creation of library “seminaries” where practicing librarians would instruct aspiring librarians in the skills of their profession, similar to those in the West. The pedagogical characteristics were however those of the Soviet revolutionary period. Librarians were trained to determine what materials were suitable to patrons and whether or not they had the ability to appreciate what the resource had to offer. Also, Krupskaya desired that librarians possess greater verbal and writing skills so that they could more clearly explain why certain reading materials were better than others to their patrons. She believed that explaining resource choices to patrons was a courtesy and an opportunity for more education in socialist political values, not something that was required of the librarian. They were to become facilitators of the revolution and, later, those who helped preserve the values of the resulting socialist state.[18]

Following her death in 1939 a Leningrad chocolate factory was renamed in her honour. Its chocolate bar product was named Krupskaya and retains that name today.[20]

The asteroid 2071 Nadezhda discovered in 1971 by Soviet astronomer Tamara Mikhailovna Smirnova was named in her honour.[21]