Cobia
This article is about the marine fish. For the member of the Ringgold Isles archipelago in Fiji, see Cobia Island. For the Romanian commune, see Cobia, Dâmboviţa. For the United States Navy submarine, see USS Cobia (SS-245).

Attaining a maximum length of 2 metres (78 inches) and maximum weight of 68 kilograms (150 pounds), cobia have elongate fusiform (spindle shaped) bodies and broad, flattened heads. Their eyes are small and their lower jaw projects slightly past the upper jaw. On the jaws, tongue and roof of the mouth are bands of villiform (fibrous) teeth. Their bodies are smooth with small scales, their dark brown coloration grading to white on the belly with two darker brown horizontal bands on the flanks. These may not be prominent except during spawning when cobia lighten in colour and adopt a more prominently striped pattern. The large pectoral fins are normally carried horizontally (rather than vertically as shown for convenience in the illustration), so that, as seen in the water they may be mistaken for a small shark. When boated, the horizontal pectoral fins enable the cobia to remain upright so that their vigorous thrashing can make them a hazard. The first dorsal fin is composed of six to nine independent, short, stout, and sharp spines. The family name Rachycentridae, from the Greek words rhachis meaning "spine" and kentron meaning "sting," is an allusion to these dorsal spines. Mature cobia have forked, slightly lunate tail fins with most fins being a dark brown. They lack air bladders.

A Cobia at an aquarium, showing the horizontal pectoral fins and broad head

Cobia somewhat resemble and are most closely related to the Remora of the family Echeneidae. However, they lack the dorsal sucker of the Remora, their body is far stouter and their tail is far more developed, and forked instead of rounded. Juvenile cobia are patterned with conspicuous bands of black and white. Their tails are rounded rather than forked as in the adults.

Cobia are pelagic and are normally solitary except for annual spawning aggregations; however, they will congregate at reefs, wrecks, harbours, buoys and other structural oases. They may also enter estuaries and mangroves in search of prey.

They are found in warm-temperate to tropical waters of the West and East Atlantic, throughout the Caribbean and in the Indo-Pacfic off India, Australia and Japan.[1] The largest taken on rod & reel was taken from Shark Bay, Australia weighing 60 kg (135 lb). They are able to tolerate a wide range of temperatures (eurythermal) and salinity (euryhaline) between 1.6 and 32.2°C and 5-44.5 ppt in the environment.[2]

Cobia feed primarily on crabs, squid, and other fish. Cobia will follow larger animals such as sharks, turtles and manta rays in hope of scavenging a meal. Cobia are intensely curious fish and show no fear of boats and are known to follow other caught fish up to a boat and linger to see the action. Their predators are not well documented, but the dolphinfish (Coryphaena hippurus) is known to feed on immature cobia. Shortfin mako sharks are known to feed on adult cobia and have been seen by fishermen following cobia during their annual springtime migration in the northern Gulf of Mexico.

Cobia are pelagic spawners; that is, they release many tiny (1.2 mm) buoyant eggs into the water which become part of the plankton. The eggs float freely with the currents until hatching. The larvae are also planktonic, being more or less helpless during their first week until the eyes and mouths develop. Males mature at two years and females at three years. Both sexes lead moderately long lives of 15 years or more. Spawning takes place diurnally from April to September in large offshore congregations where females are capable of spawning up to 30 times during the season.[3] Up to 20 individual spawns may take place in one season, with intervals of about one to two weeks. Cobia are frequently parasitized by nematodes, trematodes, cestodes, copepods and acanthocephalans.

Cobia make seasonal migrations along the coasts in search of water in their preferred temperature range. Wintering in the Gulf of Mexico, they migrate north as far as Maryland in the Summer, passing East Central Florida in March.

Cobia are sold commercially, and command a high price for their firm texture and excellent flavor. However, there is no directed fishery owing to their solitary nature. They have been farmed in aquaculture for this reason. The meat is usually sold fresh. They are typically served in the form of grilled or poached fillets. Chefs Jamie Oliver and Mario Batali each cooked several dishes made with cobia in the "Battle Cobia" episode of the Food Network program Iron Chef America, which first aired in January 2008. Thomas Keller's French Laundry offers Cobia on its tasting menu.[4] 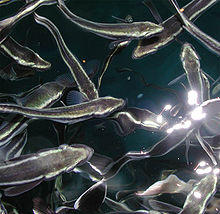 Currently, cobia are being cultured in nurseries and grow-out offshore cages many parts of Asia and off the coast of US, Mexico and Panama. In Taiwan 100–600 g cobia are cultured for 1–1.5 years to reach 6–8 kg in size which is suitable for export to Japan. Currently, around 80% of marine cages in Taiwan are devoted to cobia culture.[6] In 2004, FAO reported that 80.6% of the world’s cobia production was by primarily China and Taiwan.FAO After China and Taiwan, Vietnam is the third largest producer of farmed cobia in the world where production was estimated at 1500 tonnes in 2008.[6] Following the success of cobia aquaculture in Taiwan, emerging technology is being used to demonstrate the viability of raising hatchery-reared cobia in collaboration with the private sector primarily using SeaStation™ and Aquapod™ submerged cages at exposed offshore sites in Puerto Rico and the Bahamas.[8]

Greater depths, stronger currents and distance from shore all act to reduce environmental impacts often associated with fin fish aquaculture. Offshore cage systems could become some of the most environmentally sustainable methods for commercial marine fish aquaculture.[9] However, some problems still exist in cobia culture that needs to be addressed and solved for increasing production. These include high mortality due to stress during transport from nursery tanks or inshore cages out to grow-out cages. Also diseases during nursery and growout culture can result in low survival, and consequently poor harvest.[6]