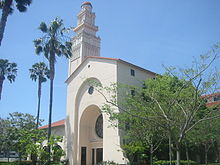 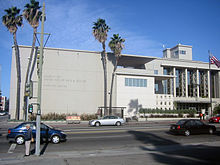 Pickford Center for Motion Picture Study in the Hollywood district

The Academy of Motion Picture Arts and Sciences (AMPAS) is a professional honorary organization dedicated to the advancement of the arts and sciences of motion pictures. The Academy's corporate management and general policies are overseen by a Board of Governors, which includes representatives from each of the craft branches.

The Academy is composed of over 6,000 motion picture professionals. While the great majority of its members are based in the United States, membership is open to qualified filmmakers around the world.

The Academy is known around the world for its annual Academy Awards, informally known as the "Oscars". In addition, the Academy gives Student Academy Awards annually to filmmakers at the undergraduate and graduate level; awards up to five Nicholl Fellowships in Screenwriting annually; and operates the Margaret Herrick Library (at the Fairbanks Center for Motion Picture Study) in Beverly Hills, California and the Pickford Center for Motion Picture Study in Hollywood, Los Angeles, California.

The current president of the Academy is Tom Sherak.[1]

The notion of the Academy of Motion Pictures Arts and Sciences (AMPAS) began with Louis B. Mayer, head of Metro-Goldwyn-Mayer (MGM). He wanted to create an organization that would mediate labor disputes and improve the industry’s image. So, on a Sunday evening, Mayer and three other studio big-wigs - actor Conrad Nagel, director Fred Niblo, and the head of the Association of Motion Picture Producers, Fred Beetson - sat down and discussed these matters. The idea of this elite club having an annual banquet was tossed around, but there was no mention of awards just yet. They also established that membership into the organization would only be open to people involved in one of the five branches of the industry: actors, directors, writers, technicians, and producers.[2]

After their brief meeting, Mayer gathered up a group of thirty-six people involved in the film industry and invited them to a formal banquet at the Ambassador Hotel in Los Angeles on January 11, 1927.[3] That evening Mayer presented to those guests what he called the American Academy of Motion Picture Arts and Sciences, and it was open to those who had contributed to the motion picture industry. Everyone in the room that evening became a founder of the Academy. It wasn’t until later, when Mayer’s lawyers wrote up the charter, did the name change to "Academy of Motion Picture Arts and Sciences".[2]

Douglas Fairbanks, Sr. was elected as the first president of the Academy. As one of his first acts, he added an activity of bestowing “awards of merit for distinctive achievement.” However, they were on the brink of forming something historical. A year later the voting system for the Awards was established, and the nomination and selection process began.[4] This "award of merit for distinctive achievement" is what we know now as the Academy Award.

In 2009 the inaugural Governors Awards were held, at which the Academy awards the Academy Honorary Award and the Irving G. Thalberg Memorial Award.

The Academy’s numerous and diverse operations are housed in three facilities in the Los Angeles area: the headquarters building in Beverly Hills, which was constructed specifically for the Academy, and two Centers for Motion Picture Study – one in Beverly Hills, the other in Hollywood – which were existing structures restored and transformed to contain the Academy’s Library, Film Archive and other departments and programs.

The Academy's main building in Beverly Hills houses two galleries that are open free to the public. The Grand Lobby Gallery and the Fourth Floor Gallery offer changing exhibits related to films, film-making and film personalities.

The Samuel Goldwyn Theater seats 1,012, and was designed to present films at maximum technical accuracy, with state-of-the-art projection equipment and sound system. Located in the headquarters building, the theater is busy year-round with the Academy's public programming, members-only screenings, movie premieres and other special activities (including the live television broadcast of the Academy Awards nominations announcement every January).

The Academy Little Theater is a 67-seat screening facility also located at the Academy's headquarters in Beverly Hills.

The Linwood Dunn Theater is located at the Academy’s Pickford Center for Motion Picture Study in Hollywood and seats 286 people.

There is also a theater for New York-based Academy events, Academy Theater at Lighthouse International.

Membership in the Academy is by invitation only. Invitation comes from the Board of Governors. Membership eligibility may be achieved by earning a competitive Oscar nomination or an existing member may submit a name based on other significant contribution to the field of motion pictures.

New membership proposals are considered annually. The Academy does not publicly disclose its full membership, although press releases have announced the names of those who have recently been invited to join.

Academy membership is divided into 15 branches, representing different disciplines in motion pictures. Members may not belong to more than one branch. Members whose work does not fall within one of the branches may belong to a group known as "Members At Large." Members at Large have all the privileges of branch membership except for representation on the Board. Associate members are those closely allied to the industry but not actively engaged in motion picture production. They are not represented on the Board and do not vote on Academy Awards.

Original 36 founders of the Academy

Presidents of the Academy

Current administration of the Academy

Not to be confused with...