Muharram (Arabic: المحرّم) is the first month of the Islamic calendar. It is one of the four sacred months of the year in which fighting is prohibited. Since the Islamic calendar is a lunar calendar, Muharram moves from year to year when compared with the Gregorian calendar.

Muharram is so called because it is unlawful to fight during this month; the word is derived from the word haram, meaning "forbidden". It is held to be the most sacred of all the months, excluding Ramadan. Some Muslims fast during these days. The tenth day of Muharram is called Yaumu-l 'Ashurah, which is known by Shia Muslims as 'the day of grief'.

Many Sunni Muslims fast during this day, because Musa (Moses) and his people obtained a victory over the Egyptian Pharaoh on the 10th day of Muharram; according to them Islamic prophet Muhammad asked Muslims to fast on this day, and also a day extra either before or after, so that they are not similar to Jews (since, according to him, Jews used to fast for one day due to the same reason).

Fasting differs among the Muslim groupings; mainstream Shia Muslims stop eating and drinking during sunlight hours and do not eat until late afternoon. Sunni Muslims also fast during Muharram for the first ten days of Muharram, just the tenth day or on both the ninth and tenth days; the exact term depending on the individual. Shia Muslims do so to replicate the sufferings of Husayn ibn Ali on the Day of Ashura. Shia Muslims, go further in their attempts of replication, including self-flagellation (also see Matam).

Main articles: Battle of Karbala, Day of Ashura, and Mourning of Muharram

Shia Muslims in Dar es Salaam, Tanzania in a Hussainia as part of the commemoration of Muharram 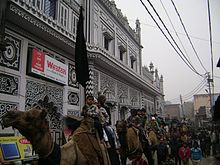 Shia Muslim children in Amroha, India on camels in front of Azakhana as part of the procession commemorating events on & after Day of Ashura

Muharram is a month of remembrance that is often considered synonymous with the event of Ashura. Ashura, which literally means the "Tenth" in Arabic, refers to the tenth day of Muharram. It is well-known because of historical significance and mourning for the martyrdom of Husayn ibn Ali, the grandson of Muhammad.[1]

Shias start the mourning from the 1st night of Muharram and continue for two months and eight days. However the last days are the most important since these were the days where Husayn and his family and followers (consisting of 72 people, including women, children and aged people) were killed by army of Yazid I on his orders, Surviving members of the family of Husayn and that of his followers were taken captive and marched to Damascus and imprisoned there.

Muharram is also observed by Dawoodi Bohras in the same way as Shias.They practice prayers on the sayings of the present dawah of Bohras, Mohammed Burhanuddin. On the tenth day of Muharrum, they pray for Husayn till the magrib namaz. When the namaz ends, Husayn is considered shahid by Yazid. It is also close to the day of resurrection because it said in a book that this world will one day come to an end on Friday 10th of Muharram.

With the sighting of the new moon the Islaamic new year is ushered in. The first month Muharram is one of the four sacred months that Allah has mentioned in the Holy Qur’aan.

The Islamic calendar is a lunar calendar, and months begin when the first crescent of a new moon is sighted. Since the Islamic lunar calendar year is 11 to 12 days shorter than the solar year, Muharram migrates throughout the solar years. The estimated start and end dates for Muharram are as follows (based on the Umm al-Qura calendar of Saudi Arabia:[2])